Ancient China can be a very strange place, at least according to the interpretation given to it by video games. Cloud Master, also known by its Japanese name Chuka Taisen, is one of the examples in the shooting genre. Developed by Taito during its prolific output of the late 80s, this game comes off as a very straightforward shmup whose colorful charm seems to lie solely in its offbeat, almost cute character design. It's also a type of early crossing between Insector X and Darius, so if you ever played one of those you'll probably identify a few of their traits in the story of Michael Chen, the boy who floats on a cloud and is some kind of apprentice to a wise elderly entity that evaluates his performance at the end of each level.

Old shooters in the vein of Cloud Master are perfectly playable on the Playstation 2 if you've got one of those lovely Taito Memories compilations in your hands - and your console is able to play Japanese discs, of course. Taito Memories II Vol. 1 (Joukan) is the one that contains the original arcade iteration of Cloud Master in all its ancient glory. As we all know these discs have great presentation, and the games themselves come with fully configurable controls. Unfortunately the game is not included in any of the Western releases of Taito Legends. 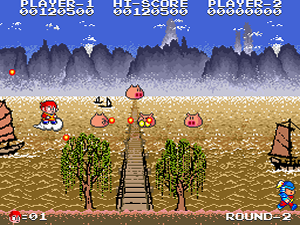 All five levels of Cloud Master offer exactly the same structure of a handful of enemy waves plus two or more mid-bosses and a main boss. Gameplay variation is virtually none, down to the way bosses throw their patterns and approach a little in a mild attempt to put pressure on the player. Parallax is pretty much absent and there's nothing special about the music. Nevertheless colors are used so nicely in the simple yet amusing backgrounds that I couldn't help but enjoy the general vibe from start to finish. It also helps that the game isn't really taxing despite the checkpoints, which require the right amount of practice without incurring in too much hassle. Since bullet count is considerably tame, knowing enemy behaviour often equals victory.

Michael Chen initially fires yellow balls as ramen cups start coming in waves. Upgrade items are released by clearing all enemies within two characteristic waves and are denoted by kanji, but their unfriendly nature goes away once you learn how to recognize both of them: one is the power-up and the other is the speed-up (if you see a third type of kanji take it, that's a precious 1UP). Initially there is no autofire, but once you've taken two speed-ups you get autofire for all your weapons. Each speed-up taken changes the color of Michael's cloud, from yellow to orange, pink, etc. I never saw what lies beyond pink because once I learned what I was doing I restricted myself to two speed-ups only in order to get autofie and keep maneuverability at an optimal level. Power-ups increase the efficiency of the main weapon until you reach a powerful wave-like shot that pierces through everything when maxed out.

Gameplay in Cloud Master uses only two buttons (□ and × by default, credits are coined with R2). The first one is responsible for the main weapon desbribed above, and the second fires an auxiliary attack that’s only acquired after you beat a mid-boss and he leaves a door behind. After entering the door you’ll be able to choose one out of four types of auxiliary powers: protective fire ring, outward multidirectional shot, expanding fire ring and ground bombs. Provided you don’t die the next door will have these weapons in enhanced forms, and the good news is that you don’t need to stick to the same type in order to power it up. If you switch to a diferent one you’ll activate it in its corresponding higher level. While they can all be very effective, especially when powered up a few times, my favorite one is the ground bombs.

If you manage to keep Michael alive long enough the doors opened by defeated mid-bosses will stop coming. That’s when you know he has reached max power. Max power is good and bad at the same time, because even though getting through the levels becomes a breeze you’ll find yourself stuck with the last secondary attack chosen. There are no obstacles in the game besides a few mounts of dirt at ground level, which can make it hard to hit enemies behind them if you haven't got the proper weapons. In the only stance of a rudimentary rank system, bosses also become more resilient the more powerful you are, often taking two to three cycles to yield as opposed to surrendering faster if you die and replay the latest checkpoint. Speaking of which, checkpoint milking is the only real way to boost the score. Besides 1UPs the game also grants score extends with 100, 300 and 660 thousand points - 660K being another very odd similarity with the later Insector X. Don’t expect the same walk in the park of Insector X though, my impression is that Cloud Master stings a little bit harder.

Though primitive and not an overly tough challenge by any stretch of the imagination, Cloud Master counts with an enemy gallery that’s surreal enough to pique one’s interest. Flying ramen bowls, cupcakes, pigs with guns, turtles, tigers, snakes, monkeys, dragons, chalks, ground/flying samurais and flying animal heads are some of the creatures players are bound to face. I was pleasantly surprised by how they're able to breath a little life into a seemingly drab game. It kinda heightened the fun factor for the little amount of time I spent with it.

A handful of consoles received ports of this game, including the Master System, the NES and the PC Engine. The obvious connection to the “monkey king” story is the reason why the recent The Monkey King - The Journey Begins for the Nintendo Wii is considered to be a bastard sequel/remake to Cloud Master.

Below is my 1CC result on Normal. I got to the last boss on one life, but I slipped up in one of his advances and had to use a few of my remaining lives to kill him off and see the game’s goofy ending. 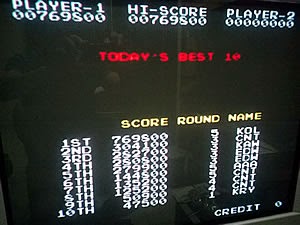