How could anyone not love Taito during the golden era of video gaming? Taito was king, and everyone who says otherwise surely needs to play a lot more games before saying goodbye to this world. Example given: in the process of porting Cloud Master to the PC Engine, the company went beyond the simple task of downgrading the arcade original to the constraints of NEC’s platform and delivered a completely new game that’s more of a sequel than a proper port. Or a re-imagination if you will, since it alters the core gameplay drastically and packs up a tougher challenge by consequence.

The Japanese name of this version is actually Gokuraku Chuka Taisen. Gokuraku translates to something close to Paradise or Heaven, and that goes hand in hand with some of the game’s aspects and the reworked shade of a story. This time around the little boy that flies on a cloud is out to rescue a princess kidnapped by an evil entity at the start of the adventure. Furthermore, all boss fights take place above the skies and amidst a background of parallax-ridden clouds. The port isn’t as colorful as the arcade game, but sprites are all reworked and the animation job is great. If all you care about in a console shooter is visuals, this little game offers great material for the eyes. It reminds me of a mix between what a flying game with Alex Kidd would be like and Namco’s Ordyne. 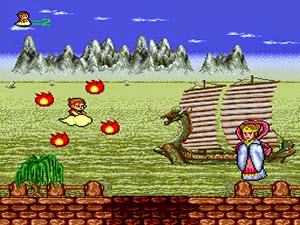 The mid-boss foxy lady in stage 2

If we look at the bare-bones structure of the arcade game, it’s natural to conclude that the gameplay departure shown in this version is a very welcome improvement in every possible way. Cloud Master on the PC Engine is full of non-linear stretches with different scrolling directions and exclusive bosses that throw lots of unique attacks and patterns. At the player’s disposal is a single firing input with autofire (button II) and a direction switch (button I). Much of the stage design and the boss fights is built around this bi-directional mechanic, so the more comfortable you are with it the higher will be your chance of success. Don’t underestimate the game because it’s cute, chances are you’ll need lots of practice to overcome your foes from stage 3 onwards.

The world of Cloud Master is a surreal one. Waves of animal heads come towards you in between noodle bowls, while winged creatures with human heads alternate attacks with jumping fish and ultra-fast missiles. Archers, rockets, deformed faces, swords, knights, turtles, dragons, onion fans and mid-bosses. Mid-bosses are, in fact, the source of very precious secondary weapons: defeat them, enter the door and select one of the four types available. A characteristic wave of five vertically aligned enemies is responsible for bringing upgrade items if you manage to kill them all. There’s speed-up, power-up, invincibility and sometimes special power-ups that further enhance the boy’s firepower (only available under certain circumstances). The problem is that all these items are represented by kanji, but at least they’re large and fairly recognizable with just a few credits in.

It’s true that the more power you have the easier it is to get through the game. However, this port is keen on setting blind traps that take the player by surprise and require thorough memorization to be properly managed. Hit detection is implemented with very little mercy, so prepare to die a lot until you realize that you’d better have the cloud closer to bullets instead of the kid’s head. The wide spread of the main weapon from the arcade original is replaced by a single straight shot, which puts a lot more importance on the secondary weapons you choose to go along with it. There are no checkpoints during boss fights, but since deaths incur in a severe power downgrade and bosses can take a lot of beating before giving in, well... I’d rather have the checkpoints. Some people might think well of the lack of checkpoints on bosses, but I really didn’t like the idea of continuing to fight with the default combo of pea shot + slow speed after I die.


The music is catchy, isn't it?
(courtesy of YouTube user Encyclopegames)

Other changes in the port appear in the form of an extra stage, a series of underground areas with lots of narrow passages and a few exclusive enemies. Some of the secondary weapons present a slightly different behavior when compared with the arcade version, and if I’m not mistaken they all have more upgrade levels (every time you enter a mid-boss door on a single life these weapons are upgraded). Ground bombs are great in the arcade, but suck on the PC Engine. For brute force it’s always best to go with the dragon, except when it’s fully powered during the air levels (that stupid dragon falls instead of flying forward). I ended up using most of them because I had to devise alternate strategies for the occasions of death, but my favorites were the dragon and the rotating flames that evolve to a nice set of wave blades.

In my opinion the highlights of Cloud Master on the PC Engine are the bosses. They're not repetitive and they're totally different from their arcade counterparts. Dragons are the evil creature of the week and appear three times here, the last boss being particularly nerve-defying. There's even an unorthodox Buddha statue that throws puffs from the cigar he's smoking! As mentioned above, don't forget you don't get back to a checkpoint upon dying on a boss, so beware if you intend to exploit checkpoints. An extra life is granted at every 50.000 points and scoring is as simple as it gets, but note that shooting at seemingly invincible enemies also gives you more points (pause to test and check where this happens).

When you take away all the time you need to invest in learning Gokuraku Chuka Taisen you realize how short it actually is. That's one of the wonders of a challenging game (which often gets more fun the more you learn it) but also one of the reasons most people do not value shmups as they're supposed to (too hard, too short). I'd say try it if you fancy a colorful little romp with a little potential rage factor included. The last screen after the credits halts to show your final score, and my 1CC result is below. 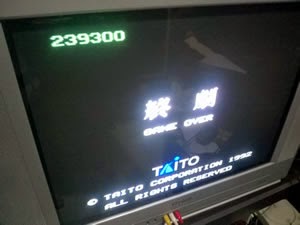