When talking about bullet hell, the perception of value and excellence in the games developed by Cave is certainly unrivaled. I still remember all the fuss when a port including the Black Label variant of Dodonpachi Daioujou was announced for the Xbox 360, as well as the rage and backlash it received upon release due to porting company 5pb using the source code from the Playstation 2 version to complete their job, which resulted in a very buggy game with inadmissible loading times. A few months later 5pb calmed fans all around the world by properly patching the game, even though the disc is region-locked to Japanese consoles of course. Because, you know, country borders are absolutely no hindrance for a real shmup fan.
Despite the ovelong title, Dodonpachi Daioujou Black Label Extra is still one of the best ways to experience this beast of a game at home. The "Extra" refers to an additional arrange variant called X-mode, which joins Black Label (here called New version) and also White Label (here called Old version, for all purposes equivalent to the port released for the Playstation 2 in 2002). For the regular bystander White and Black Label are basically the same game, that's why it definitely takes a certain degree of familiarity with both versions to discern the different nuances between them.
Ships and pilots are the basic common grounds between White and Black Label. Both available ships use three inputs: shot, rapid shot and bomb. Hold shot to fire a continuous laser stream that decreases the speed of the ship. Bombs behave according to the shot type you're currently firing: rapid shot (or no shot) results in a regular blast, laser gets a sudden concentrated boost with a brief ship recoil, both of them making you invincible and melting bullets when active. On functional terms ship A has a shorter spread and ship B has a wider spread, with firepower and movement speed also determined by the choice of pilots, or element dolls as the game calls them. Pilot selection is therefore synonym with shot type: S (Shotia) enhances shot, L (Leynian) enhances laser and E or EX (Exy) enhances both. Deaths reset laser power when using Shotia, reset shot power when using Leynian and take away one power level of each when using Exy. Deaths also add one or more bomb slots depending on the chosen pilot (Shotia gets the most bombs, while the most Exy can carry is two). 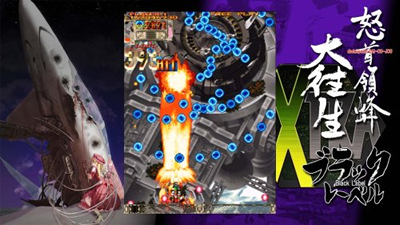 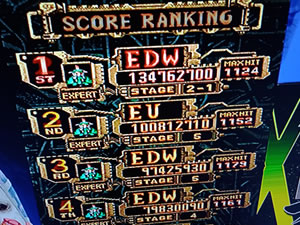 Next: Dodonpachi Daiffukatsu / Resurrection.
Posted by Edward at 5:00 AM