Most arcade shooter addicts and fans of developer Irem are very much aware of the fame surrounding Image Fight, R-Type’s long forgotten cousin. Besides being a sort of vertical mirror of R-Type in visual terms, it’s mainly regarded as a relentless game with crushing difficulty, an aspect that was duly cascaded in several ports that soon followed for various platforms. Exception made to the NES, that is.
Considering that Irem took care of the porting job themselves, the laid back challenge in this version of Image Fight was quite a surprise for me. Unfortunately that’s not the only trait that’s below the expected standard from the company, since both graphics and music take a severe hit and at times hardly resemble the original game. The general layout is there, but it’s so watered down it will hardly make any lasting impression on anyone.
The first five levels of Image Fight take place in a simulation environment, with the destruction ratio measured in each one of them. Players need to get an average above 90% in order to go directly into the second half of the game, and if they fail to reach 90% they need to go through a penalty area before advancing. In the arcade original this penalty area is much harder than anything else in the game, but that’s not the case in this port.
First simulation level for the OF-1 Daedalus spaceship on the NES
(courtesy of YouTube user The VideoGames Museum)
Button B shoots and button A toggles the flying speed up and down between four predefined settings. The native autofire has quite a low firing rate so it’s advisable to use a turbo controller for button B (one could argue the game’s difficulty is built around this autofire rate, but since you can mash the button at will this argument falls flat). Specific carriers release two types of items: a pod that cycles colors between blue and red and special attachment armors that grant the ship with extra weapons.
A total of three colored pods can be collected to acquire additional firing streams. They latch onto the ship initially on the left, then to the right and finally in the rear. Blue pods fire forward, red pods fire in the opposite direction your moving, and any mixture of them is accepted for the first three pods. After that any new pod collected defines the shot direction for all of them. Dying sends you back to a checkpoint with a bare, podless ship.
Pods can also be used in a special attack triggered by pressing buttons A and B simultaneously, quickly charging forward in a boomerang fashion. Even though this move is helpful in certain situations, I've always found it awkward even in the arcade original because it often messes with your speed setting. Since the NES port is so darn easy anyway, you can definitely live without it this time.
As for the special attachment armors, there are eight types with the most diverse effects. These include variations of straight, spread and homing patterns. Just like in the arcade, the only way to use a different attachment is by destroying the current one either by swallowing a bullet or by touch an incoming wall (my preferred method). Trial and error is the regular way to know which ones work best, but this version of Image Fight is heavily unbalanced towards the homing/searching armors. Holding on to them is definitely a nice way to comfortably breeze through the game. 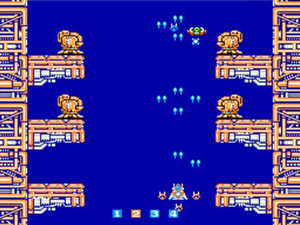 The 4th stage
Being easy isn’t a reason to actually dismiss a video game, but in the case of a port from an arcade title that’s famous for being difficult it certainly factors in the scale. However, the heavy design downgrade is a sorry blow in this particular case, after all it also suffers from a terribly washed out, uninspired color palette. Speaking of which, there are a few cosmetic diferences between the Famicom and the NES variations, but as far as I could tell they play out the same way. These differences are mostly present in the background colors of the initial levels, which are pitch black on the Famicom and flat blue on the NES.
Another aspect that collaborates with the low challenge level in this port of Image Fight is the extend routine that gives you an extra life at every 20.000 points. The only way to track your score and life stock is by pausing, but there is a faint sound cue when the extra life is registered. Unfortunately the scoring system is broken since you can easily exploit the final checkpoint of the 3rd stage (those meteors are worth a lot of points).
A message of “special game” appears when you complete all levels, prompting you to play the whole game again. In regular Irem style, it does end after you beat it one more time. In my very first serious credit I died a few times in the first round and then proceeded to beat the second loop unscathed. The final result below is the picture I got by pausing right after beating the final boss. 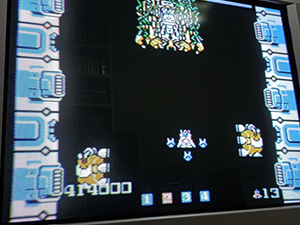