Regardless of the artistic or commercial outcome, robots versus robots will always be a great premise for any sci-fi product. This is the case of Armed 7, one of the many PC shooters from independent developer Astro Port converted to the Dreamcast by french company Pixelheart/JoshProd. Armed 7 (or Armed Seven in its original spelling) is another standard horizontal shmup, but instead of controlling a spaceship you handle a mecha/robot in an all-out war against a huge mechanized armada.
Even though it belongs in the same league and bears a few visual similarities with older titles like Arrow Flash, Spriggan Mark 2 / Spriggan Powered and Android Assault, Armed 7 has a particular vibe that makes it stand out on its own, not in a stellar fashion but at least in a decent, if only slightly derivative way. The overall rhythm and the difficulty slope are perfect for the game’s short length, while the average challenge level should please fans of sci-fi shmups looking to have another doable 1CC under their belt.
Gameplay originality notwithstanding, Armed 7 could’ve used a little more polish in the interface. Texts are a little hard to read in a regular TV connection, and the cramped HUD on the horizontal borders makes it impossible for you to see the score on the top of the screen on a normal TV. Other than that it’s at least better than the lousy port for Supercharged Robot Vulkaiser. And the pause function now works, so you won’t have to watch your credit go to shreds if for whatever reason you need to get away from the TV.
A short trailer for the Dreamcast release of Armed 7
(courtesy of YouTube user and publisher JoshProd)
Upon choosing the difficulty of the game, players need to arm the robot with three types of attacks: main weapon, sub weapon and charge weapon. There are four choices for each with small symbols to help you figure out their behavior in advance. Of course the only way to know how they work and try to settle on a preferred combination is by actually playing the game. Button A shoots both main and sub weapons, while button B fires the charge weapon once it’s allowed by a gauge that fills up automatically. Charging times depend on the type of weapon selected.
The shooting direction of the main weapon can be tilted up and down by moving vertically without firing. The act of shooting then locks the firing direction until you release the button (tilting direction can be altered in the options in the “rotation” setting). The descent to the surface of the planet in the first level is an early example of when it’s good to tilt your firepower down, in a section that’s very reminiscent of the first stage in Eliminate Down. The game then moves on across several landscapes with neat parallax effects and huge bosses, which should please fans of 16-bit shooters in general.
In order to offset the simplicity of the base game, Astro Port infused it with some very smart motivational devices for scoring. It all starts with the upgrade icons for power and shield, which are brought by specific carriers and get sucked into the ship when within a certain radius. The item with the red core increases firepower in 8 steps, whereas the item with the blue core adds one shield cell. Since every life starts with no extra shields, these blue power-ups give you a very important survival leeway. It’s possible to stack up to two shields, but if you pick up a third one an indication of MAXIMUM will appear in the area for the shield gauge.
MAXIMUM shield doesn’t actually mean you’ll have better survival chances, after all if you get hit you’ll be left with only one spare shield. What MAXIMUM does is continuosly add more points to the score as long as you’re able to go on without receiving damage, in a gimmick that's similar to the max bomb bonus in Dodonpachi. This is great to motivate flawless play, however Armed 7 also encourages you to behave aggressively because additional multipliers are applied for speed-killing medium and big-sized enemies. 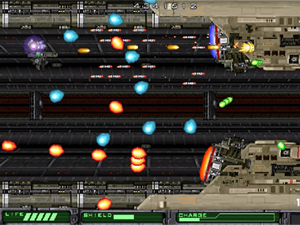 Twin cannons coming up halfway stage 4
Playing well also yields better rewards in between levels, which include time remaining on boss fights and shields in reserve. Upon game completion an extra bonus is given for all remaining lives, and three score-based extends at each initial million points add to this final prize. Finally, all bonuses increase in value according to the selected difficulty level. There’s no doubt these scoring strategies are the biggest contributors to the game’s replay value, it’s just too bad you can’t see your actual score unless you have a dedicated monitor. As I mentioned above, a regular TV set won't let you see it at all.
If your favorite weapon combinations are those that emphasize aggressive play and point blanking it’s important to watch out for deaths in critical situations. Besides leaving you with no shields, deaths also power down the ship. Except for the huge laser from the 3rd boss, which seems to expand beyond what you can actually see, hit detection is well implemented in Armed 7. What doesn’t quite work or isn’t visually pleasing is the glow effect that appears over the mecha once you collect a shield. It looked nice in the PC version, it just doesn’t on the Dreamcast. Last but not least, music and effects don’t stand out in any way, probably due to the strangely muffled sound quality.
An alternate version of the game, dubbed Armed Seven, can be selected during boot. From what I could gather it comes with an arranged soundtrack and a different color palette, but other than that the game is exactly the same, as hinted by the shared high score indication of both variants. However, since soft restart isn’t implemented the console needs to be turned off and on again if you want to switch versions. In both of them a practice mode lets you adjust all ship stats prior to directly playing the desired level. According to this resource Armed 7 has rank, but it must be so subtle that I didn't in all my play sessions notice anything related to a dynamic difficulty adjustment.
My favorite weapon configuration was riot gun + cluster gun + beam cannon. The beam cannon is the one that takes longer to charge, but its power is second to none if you want to use it to weaken or obliterate larger enemies. The best 1CC score I got in the normal difficulty is below. All high scores in this screen are properly saved in the VMU. 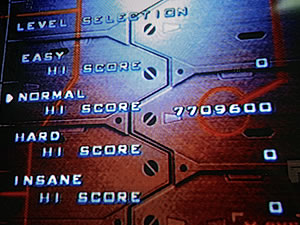