There is one aspect of the Donpachi port on the Playstation that’s really harsh on those who value the best gameplay experience you can have on a home console. When played on default settings the screen wobbles up and down, in what was supposedly aimed at giving the player a complete view of the play area. The problem is that not all gamers are fans of this wobble effect, and the fact that you can’t turn it off on a regular 4:3 screen display is even more aggravating. One of the solutions to this is to turn the TV on its side and activate TATE mode. TATE is synonym to a 3:4 display and corresponds to the majority of the displays for arcade vertical shooters. When played in TATE the console game ocuppies the whole screen and the resolution is as close to the arcade as you can get, as well as the experience. In the case of PS1 Donpachi it’s been long since I promised myself I would play it only if I was able to TATE, and thanks to a few good shmupper fellows at the retrogamer forums I finally had no excuse not to do it. The game had been chosen as the competition title for a couple of weeks.

Being Cave’s first shooter, Donpachi bears strong resemblance to the late Toaplan games, most notably Batsugun and Grind Stormer. It's the cradle of one of today’s most revered shooting franchises, and despite the roughness around the edges it’s still capable of delivering bad ass challenge both for survival and scoring play styles. Bullet density can get tough amidst the myriad of turrets, tanks, ships and flying fortresses, but it's still heavily bent towards the old school feel of the abovementioned influences. Hence Donpachi's most important contribution to the shmup genre as a whole: besides giving birth to arcade danmaku it established the symbiosis between Shot and Laser, something that helped define the way people should approach a handful of Cave (and non-Cave) shooters over the years. Tap the button to get regular fire, henceforth known as Shot, and hold the button to unleash a continuous stream of energy, henceforth known as Laser (while "lasering" the ship moves at a slower speed). Note: on the console ports you have the advantage of getting separate buttons for Shot and Laser, with Laser overriding Shot. 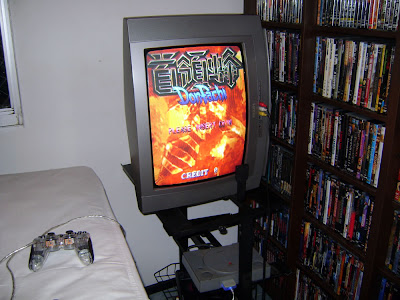 The first TATE setup will never be forgotten!

Basics are applied to three very distinct ships. Type A (fastest) has a straight firing pattern, type B (middle speed) counts with side turrets that bend as you move sideways and type C (slowest) comes with a spread pattern that covers a huge chunk of the screen when maxed out. Powering up is done by taking P items, but you need to get two Ps in order to see a step up in firepower. B icons stand for extra bombs, which are also granted at the end of every stage (stage number equals the number of bombs refilled, so at the end of the 4th stage you can get 3 bombs back in stock). Bombs produce a screen clearing detonation, but when used with Laser they actually boost the ships’s fire stream into a hellish destructive blast, one that's so powerful that will pull the ship back while it lasts.

This time around I had a new opportunity to delve a bit more into the scoring side of the game, so I changed my ship preference from type B to type A. Therefore I needed to be more careful with survival and pay much more attention to ship placement so that I could get the longer possible chains. Chains in Donpachi are simply the act of killing successive enemies with no more than half a second between each one. The first kill is the most important since its base score will be multiplied by the chain value in a progressive succession (take a look at the multiplier figure below the score display to see how it works). The key is to weaken large enemies to the brink of destruction and let them live long enough so that a long chain can be started once other smaller enemies group around them or dive into the screen. Heavy memorization is the only way to get rewards from this.

Another source of points is bee collecting. They might appear from selected ground targets, but most of the time you need to laser hidden spots to uncover them. Taking all 13 hidden bees within a stage will give you a good scoring bonus. I can safely do this in stages 1 and 2, and have yet to try doing it in the rest of the game. Provided you don’t use any bombs the end-of-stage bonus also starts to become a relevant part of scoring. On the other hand, scoring higher and getting extra lives (an extend with 2 million points and a 1UP uncovered by destroying a central turret in stage 4 without bombing) will dangerously increase rank. Rank level is clearly noticeable by how enemies immediately get less aggressive when you die with a full life stock in later stages.

Most of the improvements I made this time were related to sustaining longer chains in stages 2, 3 and 4 in a consistent manner. That's when type A is more recommended than type B, since the helicopter's moving turrets induce an extra layer of difficulty during those split-second chaining sequences. I also learned how to get all bees in stage 2, and while I could have tried to do that in later levels I just didn't have the time to do it. Confidently no-bombing the fourth boss and getting a +400k bonus out of stage 3 were achieved as well. To get this bonus you can't die and the bomb counter can't be increased (the more you bomb the more bomb slots you open, which provide better bomb stock possibilities but reduce the end-of-stage bonus). Regarding chaining, it should be stressed that the act of lasering a stronger enemy in Donpachi does not keep the chain going - this is an improvement that came with Dodonpachi, the sequel. It might seem silly now, but it took me a while to fully understand this.

Donpachi is a true classic but it's in almost every way overshadowed by its sequel. Truth be told, this happens for very good reasons such as Doponpachi's tougher difficulty, flashier graphics and full throttle bullet hell from the get go. Nevertheless there's one thing I definitely prefer on the first game: the cheesy announcer and his bossy commands. JUST A COUPLE MORE SHOTS is the most recognizable message, but there's a lot of other great ones. KEEP YOUR FINGER ON THE TRIGGER, ROOKIE! Unlike further entries in the series there are no requirements to get into the second loop in this first chapter. Not only does the game get harder on the extra loop, but everything killed at non-point blank distance generates loads of aimed suicide bullets. That's when memorization pays off as an essential resource to survive, since every now and then you're forced to stop shooting in order to get through the bullet mayhem. True last boss Hibachi awaits if you're skilled enough and beat the game again.

Comparisons between the Playstation and Saturn versions of Donpachi are inevitable. First and foremost, the only real advantage of the Saturn port is that it allows gameplay in YOKO without the vertical wobble. It is marred by awful loading times and admittedly has more slowdown than usual (nothing gamebreaking though in my opinion). On the other hand, even though the PS1 version has reasonable loading times and no slowdown ripples players who can't/don't TATE are chained to the vertical wobbling. There's an extra option to stretch the image horizontally (yuck!) but the wobble is still there.

The high score below was achieved on NORMAL with the type A ship (note that the default difficulty is EASY). 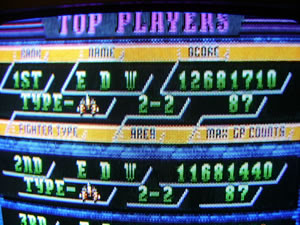