Everybody knows that Irem’s image in the golden era of arcade shooters will always be associated with R-Type. The company was never able to come up with a title or a franchise that could match R-Type’s incredible success, but at one point in time Image Fight was certainly one of its more prominent efforts, as indicated by the plethora of ports the game received across many different platforms. The 32-bit bundle releases of Image Fight & X-Multiply is one of them, and the Saturn disc is surely bound to please those who want an arcade-like experience at home, TATE mode included.

Image Fight is also famous for packing a remarkable challenge, another trait that somehow became synonym with Irem games as time went by and arcade shooters evolved through the 90s. As demanding as it is, the game just uses and abuses the same mold of its more famous horizontal sibling. Memorization and proper piloting of the OF-1 Daedalus ship can certainly help dedicated players in their mission to save humanity from another unspeakable evil. I just couldn’t find any reasoning for the game’s name besides the obvious fact that the first five stages take place in a simulation environment, working as training for the real deal that unfolds in the last three levels. You also need to achieve a minimum destruction ratio of 90% in the drill levels, otherwise you’ll have to get through a penalty area before proceeding to stage 6. And if that happens be ready to face twice the opposition you had until then because this penalty area is nearly impossible to conquer. It’s so obnoxiously hard I never even dared to try to learn it. 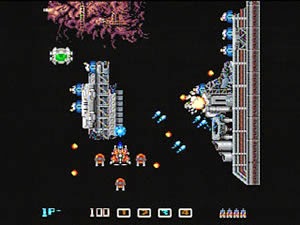 Up front I can tell why Image Fight failed to reach the level of stardom achieved almost instantly by R-Type: meager flocks of erratic cannon fodder flying around against a forest background and the sorry lack of a good opening tune. Yes, the first level is boring and uninspired as hell. Moreover, the spaceship stage comes too soon and doesn’t impress either. At least you’re given the chance to get used to the controls, which on the Saturn work with shot on button A, speed switch on button B, pod attack on button C and autofire on button R. An excellent set-up that’s a bit marred by the awkward fact that you can’t reliably switch speeds while shooting... If you want to safely do that stop firing for a bit, or else you’ll risk your precious strategy by moving at an unwanted speed or performing the pod attack when you least expect it (though some people might think so, that's not the port's fault; in the original controls the pod attack is accomplished by pressing shot + speed at the same time).

By destroying specific carriers the player releases upgrade items. The main one is a pod that provides additional firepower and comes in two colors: blue (straight shot) and red (opposite-movement free aim). Up to three pods can be attached to the ship: the first one will hover on its left, the second one to the right and the third one on the ship’s rear. By pressing button C you make the frontal pods dash forward in a quick boomerang attack, a move that can also be used to have the pods crawl the other sides of walls while you remain unharmed (don’t worry, the pods will always come back to the ship). All other upgrade items consist of a series of frontal attachments that equip the ship with special abilities. These can be v-shaped, ring or wave spreads, bending lasers, side shot, homing missiles and a straight drilling shot, among others such as a charge-based shield that works against autofire.

Frontal attachments represent the backbone of sucessful gameplay in Image Fight, and without them it’s really hard to get anywhere in the game. They’re a bit tricky to use because in order to get a different attachment you need to get rid of the current one, and the only way to do that is by destroying it. Allow it to scrape a wall or get hit by a bullet (all of them work as a 1-hit shield, which is cool). Fortunately every single upgrade item throughout the game appears at the exact same place, which allows for all kinds of strategic planning. As tough as some sections and checkpoints are (two per level), there’s always a way to get back up upon dying. One neat addition to the gameplay is the fact that the thrust animation whenever you switch speeds is also capable of inflicting damage. Remember that if you need to start from a checkpoint in the last stage.

Getting the game down to a science is often the feeling you get when you are dedicating yourself to a shooter like Image Fight. Ironing out the details and devising optimal ship placement, constantly trying to reduce risks while greed hovers like a ghost at the back of our minds (simple scoring system, kill everything, milk checkpoints if you want). To make matters just a bit more complicated Irem decided to throw in a rank system that makes the game harder the longer you go without dying. That’s easily noticeable on the varying intensity of enemy aggression and the appearance of extra enemies that vanish after you die once or twice, especially in stage 7. Extends are score-based and come with 100, 300 and 500 thousand points.

I’d say seeing past the first couple of levels is often what it takes for most people to start developing some love for Image Fight, for that’s when the game finally starts to get interesting and fun. Narrow corridors full of turrets, walkers descending over you as you need to tear down energy nets, organic beasts protected by impenetrable hulls and outer space mazes guarantee the kind of rush that’s expected from the makers of R-Type, with lots of the same sound effects. Most bosses can be dealt with as if you were in a Wild West duel, where you can gun them down in seconds if you manage to position yourself close to their weak spots. The gameplay is tight, so learn how to take good advantage of the four different speed settings at your disposal.

Initially I had a major gripe with the Saturn port, related to the way TATE mode is implemented. The resolution is wider than the regular TV screen, to the point where the developers added an “adjust” option accessible whenever you pause the game. I had to make a decision on what I was able to see, and I tweaked the screen so that I could at least glance the speed settings while losing sight of a thin strip at the top. I couldn’t see side borders at all in stages that have them (3, 4, 8), so I had to memorize how far I could go at any given point. Just an unnecessary annoyance that I was fortunately able to overcome... I guess YOKO mode is okay if you can't TATE, but the resolution makeover seemed odd for me. A final complaint I have is that in a few runs I achieved exactly 72% in stage 5 despite destroying every single creature in it. I wasn't able to figure out the catch, but I was very distressed when I couldn't get the 90% average to go directly into stage 6.

All other aspects of the port are quite decent. Loading times are negligible, continues are unlimited and every time you make into the high score table the game asks if you want to save it, which is very cool (loading is manual but no hassle at all). Most online sources state that the Saturn version of Image Fight & X-Multiply is superior to the Playstation one. Hopefully I'll be able to check the latter in the future and see if that's true, as well as try all other ports made for less powerful systems. Finally, a few other sources point to the fact that Image Fight was the main aesthetic inspiration for Treasure's masterpiece Radiant Silvergun, which is a huge compliment in my opinion.

In the number 1 spot of the high score table below I reached stage 2-3 (11) on Normal, dying just before reaching the boss to those unexpected floating turrets coming from below. Note: the sequel Image Fight II was released only for the PC Engine CD in 1992. 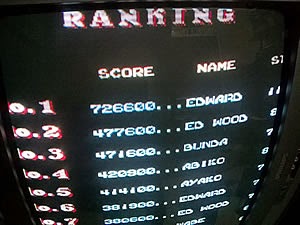