Planet Zorgaba needs you. It's under attack and must be defended at all costs. However, if you decide to accept this mission, be afraid. Be very afraid. Be more than afraid. For Zorgaba isn't an ordinary planet, nor is Defender of Zorgaba an ordinary shmup. It was, after all, designed by a couple of dudes and a chick (I'm not making this up, it's written in the game's opening screen). Not calling it ordinary is fair because for me the word ordinary evokes "poor and basic", as in "poor experience + basic execution". There are many shmups that fall into this category, and Defender of Zorgaba isn't one of them. It's more in the lines of "sleep-inducing experience + flawed execution", a sad combo that relates well with "disaster + torture".

We shmuppers have to beware of our choices when we select games randomly for friendly competitions. Defender of Zorgaba was a short-lived XBLIG choice that was soon replaced once the participants figured out what was at stake. Sure planet Zorgaba still needed protection, but to have the game as official ground for something that's supposed to be thrilling and fun is too much of a stretch for any shmup fan, even those who have a knack for stinkers such as myself. Therefore, the game was promptly dropped and neglected by all. Nevertheless the shmupper in me was still willing to give it a minor share of attention. I had started it, I would see it to the end. 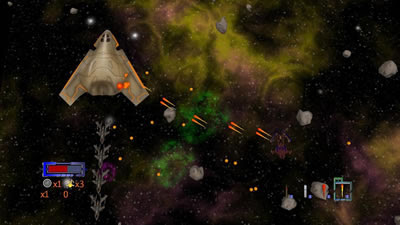 Defender of Zorgaba is a bare bones vertical shooter with a ship that looks like an alien insect. The proximity of the Zorgaba planet is full of asteroids flying against a fixed background (talk about a cheap way to achieve the scrolling effect), populated with a very limited selection of enemy spacecraft. The start of the journey is pretty void, but soon the screen gets a little busier with incoming bullets and enemies. Some of them will randomly drop items to collect, including health recovery cells, shields, extra bombs, extra lives and weapon upgrades. These upgrades are applied to whatever weapon you're using, out of four selectable with the bumper buttons (L1 + R1). There's the straight shot, the spread shot, a homing shot and a twin-stick shot, for which you must also use the right analog stick to fire. The twin-stick weapon is by far the oddest design choice of the game, since it also allows you to use a guided missile by aiming it while holding the right trigger (R2). Unfortunately, using it is so cumbersome that it becomes practically useless in the heat of the battle. Damn, even the twin-stick regular shot isn't that useful at all. And for those wondering, the use of the D-pad is totally disabled.

Each weapon can be upgraded three times and has two modes of attack (concentrated and wide), which are switched by pressing the X button. The straight shot is the most powerful one, while the spread pattern is good for overall coverage. The homing weapon serves a purpose when bosses fly in the lower part of the screen. Boss fights seem to drag forever, especially the first one, due to the nature of how power-ups are acquired - sometimes you get to him quite underpowered, even if you don't die. The good news is that there are only four bosses, and they become easier as the game unfolds. The sad news is that three of the four stages have basically the same background. Make no mistake, defending Zorgaba is a long, dull and repetitive ordeal.

Dying incurs in two consequences: (1) you lose all power for the weapon you're currently using and (2) the score multiplier is reset. The rule for the multiplier is pretty simple: kill enemies and it will slowly increase, die and kiss your scoring progression a sad goodbye. Now dying in any shmup isn't good at all, but dying because the game controls like shit is even worse. When you finally come to grips with the small inertia of the ship (noticed when you stop moving), eventually you discover that approaching a side border can be fatal because in 9 out of 10 times the ship will mysteriously get stuck, turning you into an intergalactic sitting duck! This is inadmissible, and during boss fights the situation is even more critical.

Speaking of bad programming, a friend reported once that the 4th boss left the screen during the combat to not return anymore. "Forever alone in Zorgaba's defense", that's what it's all about. Not programming related, another feature that can be annoying at first is the shield, which increases the hitbox massively. There was a time when it became invisible on me - I noticed I had it by the noise I heard when I got hit without losing any health. The music can be defined as weird, with a few grating parts that match the game's atmosphere but ultimately get mixed up in a bag of uninspired crap.

With all its flaws and atrocious design traits, I still think I should congratulate the developers for coming up with such a unique name for this game. "Zorgaba" sounds very funny when pronounced in my language (Portuguese), and I can't help but feel all warm and fuzzy inside when people ask me what I played recently in my 360. "Zorgaba, dude, I was playing Zorgaba". And they all go "...but WTF is Zorgaba?" to which I grin as if it was the most precious guilty pleasure ever. Of course this is not the case. Defender of Zorgaba is a shmup and I love it for what it is, but I'd be crazy if I didn't give it its just desserts.

My 1CC high score and maximum multiplier can be seen below (no deaths): 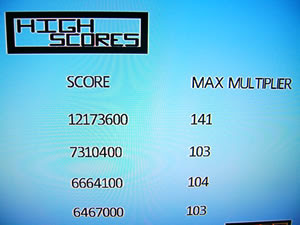