Ever since Namco released Dragon Spirit in the arcades back in 1987, several adaptations had been made for the most diverse platforms. However, the first version to have real potential to provide the arcade experience at home is the one included in the Namco Museum Vol. 5 compilation, which graced the Playstation library ten years later (I wonder why Namco gave absolutely no love to the Sega Saturn like Capcom did with their Capcom Generation series, but alas). On its own this port is a very good one, but the fact that it offers a TATE option is reason alone to make it the preferred version for players who are able to turn their TVs/monitors on their sides. As far as I know none of the most recent compilations released for newer platforms has TATE.

In order to play the game all you need to use are two buttons, used in the same manner as in the classic Xevious. The first button makes the dragon spit fire bullets/streams, the second one makes him drop blue goo on the ground. This second attack takes effect at a predetermined distance and is used to destroy ground enemies and targets. Striking a balance between the two types of attacks is essential if you want to succeed at the mission of rescuing a beautiful girl from the evil final boss after being turned into a dragon by a magic sword.

A little note before moving on: this port of Dragon Spirit comes with the OLD and the NEW variations of the game. The OLD version has slightly different stage layouts and doesn't allow stage selection, but the reason why it's largely ignored by the gaming community is the slower speed of the dragon (easier to notice when you move downwards). Once again I played the NEW version, having already cleared it on the Playstation 2 a few years ago on the Namco Museum 50th Anniversary.

Ancient and mythological creatures like dinosaurs, griffons, firebirds, phoenixes and mammoths are just part of what lies ahead of you across nive levels of increasing difficulty. Animation is basic but gets the job done, and the music is pure bliss for those who enjoy fantasy themes. The item collection that provides upgrades to the dragon's firepower is considerably vast, and knowing how each item works often plays a strong role between life and death. It's not always a good idea, for instance, to max out your firepower, since the dragon's nose aquires a very deceiving dead zone despite the extreme power of flame weapon. That can be deadly against speedier enemies (marsh stage) and close-range attacks (inside the castle).

Whenever ground eggs or blinking enemies are hit an orb will float out of them. 90% of the time they will wander inside the screen for you to take, the 10% remaining will randomly fly away. Orange orbs add points to the firepower gauge, and three of them upgrade the main shot into more powerful forms (first fireballs and then the almighty flame). Each blue orb grows an extra head on the dragon, but note that with three heads (max) your hitbox also increases, thus making it harder to move around. All other types of items are less frequent but not less important, such as: shrink (single-headed tiny dragon), spread shot (white dragon), temporary homing/exploding shot (gold dragon), full flame power (green dragon), earthquake (all ground targets are destroyed as they enter the screen), temporary invincibility, diamonds (1.000 points), gold (10.000 points), improved eyesight (in stage 8 only), dragon egg (collect 3 to win an extra life) and complete power down (black orb).

Each life in Dragon Spirit allows the player to get hit once before dying from the next enemy blow. Don't expect to recover any lost "health", it's impossible. Every time you get hit without dying you lose one power level and one head (if you happen to have at least two heads, that is), however deaths do not deplete your reserve in the firepower gauge or the collected dragon eggs. Considering that the scoring system is pretty basic, prone to randomness and only exploitable if you decide to die in particularly long and tricky checkpoints (ice level, second part of the castle), survival often takes a larger role in the long run. Many players refrain from using three-headed dragons, or even completely upgrading the main weapon.

Other important gameplay aspects for survival involve the permanent effects of some items, such as the spread shot. It completely overrides the regular weapon, and the only way to revert it back to normal is by taking the exploding/homing shot (once it ends the dragon gets back to normal), the full flame orb or the black item (sends you back to the default dragon). By the way, the closer you get to the final stage the more you notice the black item isn't as bad as it seems, plus it's hard to evade from it inside the busier parts of the castle. Remember that there are two score-based extends, granted with 100.000 and 200.000 points. 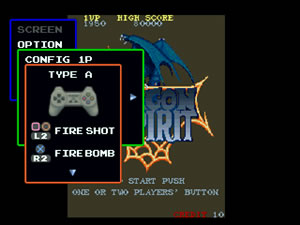 Instead of focusing on pure or heavy dodging, Dragon Spirit definitely requires more effort on memorization and careful placement. It alternates between wide open environments and purely claustrophobic sections where tiny dragons rule (get a blue orb to "grow" back to the normal size). Diversity is the norm in the game, with all stages boasting very specific designs and unique enemies with little repetition throughout.

The Namco Museum Vol. 5 disc opens with a cheesy animated intro that reflects everything about the feeble infatuation for 3D that plagued the 32-bit generation. The museum option that brings lots of information about the games in the collection is a chore to navigate, but thankfully the options for the games themselves offer no complication at all: just press Δ at the start screen. Regarding Dragon Spirit, besides setting up TATE (clockwise only, which is rather unusual) you can also adjust screen position, select between OLD or NEW version, mess with the original arcade DIP-switches and turn off continues/pause/sound for the attract mode. Without pausing you won't be able to reset the game though (while paused, press Δ to call the reset function). Exiting the game is required if you want to save high scores and settings.

The only thing that's missing in this port of Dragon Spirit is an autofire option, so I recommend getting a turbo controller if you don't want to suffer severe wrist damage. I used one, and below is my final 1CC score (NEW version, Normal difficulty). I guess now I'm ready to try the sequel Dragon Saber, which has an equally nice port on the Playstation included in the Namco Museum Encore disc. 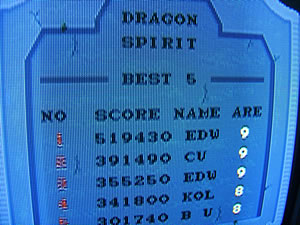