An evil alien galactic creature named Parasitis is swallowing planet after planet in the distant future. When planet Abadox is devoured and all military resources are crushed by the enemy, the only hope left is to send a single soldier in a flying suit into Parasitis itself. Instead of blowing it from the outside with the expected fireworks of the shoot’em up lore, brave warrior Nazal must enter the planet’s mouth and dig deeper and deeper into its inner defenses. It’s no surprise that The Deadly Inner War appears as a subtitle in the NES box, but as gross as the idea might be at least Nazal gets to rescue a beautiful princess while fulfilling his mission.

The description above would make you think that Abadox might be similar in style to titles like Air Fortress, Section Z or Dropzone, but it’s actually more akin to the classic standard of the scrolling shooter. It’s Innerspace in outer space, and while our hero resembles the likes of a Turrican soldier with permanent flying ability the game immediately reminds us of Konami’s Salamander/Life Force. Odd stages are horizontal and even stages are vertical, but there’s a rather unusual twist: instead of going up, in all vertical sections you fly downwards. It makes perfect sense, given the story and the way everything is laid out. And the similarities with Konami’s classic don’t stop there. Watch out for spikes, bosses and music cues that seem directly lifted from Salamander.

Far from being a cheap copy though, Abadox oozes with originality. On the matter of cool graphic designs for the NES, this game is a winner. Surely the quirky theme helps a lot in this case, but how not to like a game where you fly over the creature’s gigantic tongue, penetrate its intestines and inner organs and come out in one piece from its rectal cavity? Yes, it’s that awesome. 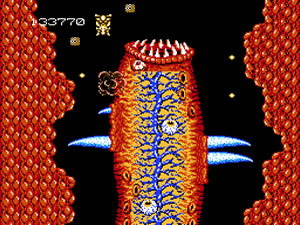 "I don't like the look of this... Where will this path take me?"

Skulls, reptiles, tentacles, bacteria, eyes, mutated organs and wall rashes aren’t the only resistance you find in the seven stages of Abadox. They’re mixed with mechanical hazards and laser barriers, clearly implying that Parasitis is, in fact, an artificial creation. Exerting justice is carried out with an arsenal defined by icons released from blue scorpions. Beyond the default pea shot it’s possible to acquire four different weapons: 3-way shot, 5-way shot, bubble shot and laser. Right here and now I point out the only bad aspect of the gameplay: the icons for all weapons look the same, making it hard to distinguish which ones you should take. Fortunately this is not that harmful in the long run since no weapon is downright bad (despite the capped firing rate of the 3-way gun). Sticking to bubble or laser is best though, especially for the vertical stages.

Those blue scorpions also release other items for pick-up, such as the essential speed-up (S), missiles (M), rotating options (B) and P (power barrier). Take a second M to get missiles with homing ability, stock up to 4 options for extra protection against incoming bullets and collect the P to get a 3-hit shield (the shield is active while the flying suit is glowing). Shooting is accomplished with button 2, with button 1 expanding and contracting the radius of the options. After a while I realized this radius adjusting feature is pretty useless, so eventually I stopped fiddling with button 2. Another note about the options is that they disappear once they’ve taken enough damage (or maybe it’s a timed thing, I couldn’t really tell). What I did notice is that options turning blue is a sign of their imminent loss.

Losing the options isn’t such a big problem because the player is well served of them throughout the whole game. Maybe the only part where I missed them was against the mid-boss in stage 3. Regardless of options, the vertical stages are definitely harder than the horizontal ones, to the point where it gets really hard to recover if you die there. There are no extra lives or extends in sight, so Abadox is another shmup where finishing on one life is strongly encouraged. Frustration might kick in depending on how you deal with a couple of enemies in the shaft towards the last boss. There’s this mud ball that blocks your weapon, a bear (!) that pulls you down if you let it grab you and a phoenix bird whose particles chase you around if you hit one of them before they assemble in the middle of the screen. The good news is that the difficulty curve is reasonable, hit detection is decent and continues are unlimited, therefore this isn’t an 8-bit shooter where it’s okay to blame controls or design for not performing well.

Unfortunately the scoring system in Abadox isn’t valid because many safespots during boss fights make it possible to easily counterstop the game. Besides, the last glimpse you’ll ever have of your score is during the fight against the last boss. The score isn’t even displayed as you weave through the corridors in the escape sequence (yet another nod to Salamander). This oversight – sadly very common in this particular gaming generation – is the only real stench in an otherwise great little shooter. The lack of autofire can (and should) be bypassed with a turbo controller.

Anyway, I would love to see a sequel or a similarly themed shmup released for today’s machines. I had a previous 1CC score on Abadox, but comparing it to this new one is useless due to the nature of the game’s scoring system. I cleared it again on one life and had good fun for a lonely afternoon, as a break from the dire clutches of Guwange. 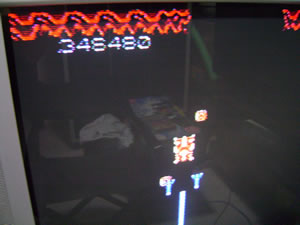