For some time now I've been willing to give a chance to Dezaemon on the SNES, only to see what that sample game Daioh Gale was about. Blame it on Daioh, Shienryu and Athena/Warashi. After accomplishing this mission I went online looking for more info on the SNES game, only to find out I should've started the series on the Famicom version - an oversized cartridge that made me devise a special hinge to make it fit into and work in my classic NES console.

I could try to come up with something to properly describe the Dezaemon series, but I really can't understand any Japanese so details would suffer greatly. Fortunately the guys from the Hardcore Gaming 101 website made an outstanding article that should give a great insight into these games, complete with technical information. On my part, suffice it to say that the purpose of a Dezaemon title is to allow gamers to build their own shmups using a predefined set of tools. Every release also comes with one or more sample games, which are actually the only reason I own them. In the case of Dezaemon for the Famicom this post is more of the documenting kind, for the sample game is some kind of a joke and can't actually be considered a shmup worthy of anyone's precious time. 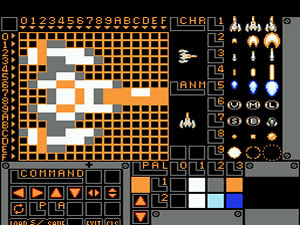 The name of the sample game is E.D.I.T, at least that's what shows up when you select the first option from the initial menu written in Japanese. PLAY GAME will allow you to move the ship and shoot against a black screen (testing?), EDIT GAME will send you back to the starting menu and SAMPLE GAME starts the actual gameplay with promising huge characters displaying STAGE 1 and a score of 000.000.

E.D.I.T looks like an early beta for a Star Soldier game. You can shoot with either button A or B. The game starts with almost no color, with black backgrounds and a succession of drone waves intertwined with power-up carriers. The items that emerge can be speed-ups (S), shields (B), options or weapons. Whenever you choose to take the option you relinquish any weapon you might be using, but then you're allowed to have three trailing options at once if you stick to the same item. The shield gives the ship protection against three hits. Weapons are powered up by sticking to the same letters: vulcan (V), laser (L) and missiles (M). Laser is by far the best alternative, apparently also with many more upgrade levels than the others. I say "apparently" because the game just wasn't long enough for me to test it out. Besides, item appearance is totally random and it's completely normal to go through a whole stage without coming across a single speed-up to help you move faster.

Not only does E.D.I.T have very poor gameplay, but it's also extremely shoddy with essential details such as the score display. When you clear all three stages on one credit the last glimpse you'll ever have of your score appears between the second and third stages. During gameplay it's not possible to see the score (or the number of lives for that matter), and after the last boss is done the credits "roll" and the player gets sent back to the start screen. The highest possible score is only seen if you lose all lives and suicide on the last boss.

E.D.I.T in all its crappy glory
(courtesy of YouTube user amagishien)

A sample game being poorly designed and laughably easy is a capital sin in any creation engine, but obviously this first version of Dezaemon could not offer much more due to the limitations of the hardware. One of them is that you can only design vertical shooters. I didn't bother to check other constraints in the construction kit, but if you want a little more info on that you can check that precious link I posted a few paragraphs above.

For a little while I tried to figure out how to improve the score in E.D.I.T and how much each major enemy was worth, but it was useless. I ended up pretty disappointed on the whole thing. Below is the highest score I was able to record by purposely dying on the last boss. Of course the 1CC was done, it just doesn't lead to any score once the game is over. 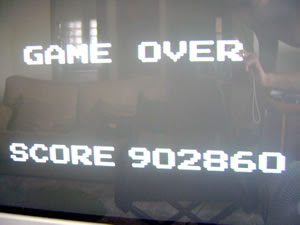