Shmuppers who love the 16-bit era of gaming know that Eliminate Down is a rare and expensive beast, and they often curse the powers that were for not letting the game leave its native Japan. The idiosyncratic title is a mystery that has no solution even within the game itself, a behemoth of 16-bit awesomeness with an organic theme that resembles Salamander but plays a lot differently, in a gameplay style that's closer to the likes of Thunder Force III and Hellfire. Talking Mega Drive shmups only, its rarity and market value are only rivaled by that of Slap Fight, and since the game was never ported to any other platform the only option left is either emulation or a good chunk of money (often >U$300 as of today). In my humble opinion it's totally worth it, it doesn't matter if you're a collector or a true gamer. Eliminate Down is definitely one of those cases where rarity goes hand in hand with quality.

Just taking a quick glance at the first stage is enough to have an idea of the game's bold scope of design. The spaceship appears amidst an ongoing battle with lots of other ships in the background, being welcomed by a space worm and descending on a planet right afterwards as a series of missiles is launched from its surface. The stage ends with a boss fight on a desolate desert landscape that scrolls by with a nice parallax effect. If you pay close attention to the music you'll notice there's a total of four BGMs in the first stage alone: one before the mid-boss, one during the mid-boss fight, one that starts after the mid-bosss is killed and another one that plays during the boss confrontation. Even though the music is the only aspect that deserves criticism on my part, this is a clear indication of how much zeal was applied to the whole game. 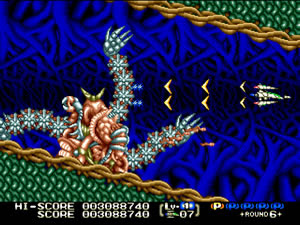 An undescribable creature with an arsenal of surprises

Getting the hang of how to use the available weapons is the first thing you need to do to enjoy Eliminate Down. There are three of them: (1) a forward spread pattern, (2) a missile launcher that drops bombs above and below the ship and (3) a rear shot. They are fired with B and cycled with both the A or C buttons, but always in the same order (1 → 2 → 3 → 1). Cycling weapons is essential and should become natural if the player wants to perform well in some of the trickier passages in the game. The use of two buttons with the same function is a bit of a waste because one of them could've been used to set the ship's speed - just like in MUSHA, here you need to pause the game in order to select the ship's speed. I restrict my approach to the B and C buttons since I like to play with the default speed 100% of the time.

Power-up items (P) are obtained by destroying a specific wave of drones, and for every 5 collected you upgrade one level of all weapons. There are two upgrades in total, so it takes 10 power-ups to max out firepower. Further power-ups will result in 100.000 points for every group of five. All other items are released by single drones that appear from time to time: the barrier/shield (B) grants the ship with a protection against two hits, and the energy cell (E) increases the power of the ship's forward single shot, which remains active regardless of the weapon selected. In its final upgrade it takes the form of a piercing laser that's capable of hitting enemies through walls. Whenever you die you lose one power level, so it's possible to recover pretty fast depending on how you perform during the next wave of power-ups.

Eliminate Down has a classic structure with very distinct stages and gameplay that rewards memorization and strategy. As long as you're able to keep the shield energized things always feel under control, but as soon as the shield is down a dreadful sense of danger kicks in, much like the feeling you get when you've got a naked Silver Hawk in any Darius game. Enemies are sneaky and deadly, and lots of dangerous situations are imposed by the stage design alone. Stage 7 is probably the most treacherous of all levels, with moving walls everywhere, inverted scrolling and a huge sudden fire beam prior to the boss. It's cheap just on the first go, once you get there again you can't help but feel the power as you anticipate everything towards victory. As for bosses, they're all large and varied, demanding lots of dodging and/or careful positioning in order to be defeated. As a rule of thumb, some weapons are more suitable than others in certain occasions, and aggressive point blanking is recommended in order to kill stronger enemies faster. Try doing it with the mid-boss in the first stage, he'll die before even turning back.

There is absolutely no doubt that this is a rock-solid shooter with decent challenge and outstanding atmosphere. A little bit of flicker and slowdown must be expected, but it's nothing serious. Some BGMs are memorable (that wonderful 3rd stage!), but the compositions in general aren't on the same level of excellence present in the rest of the game. A few areas allow you to rack points forever (bosses), and while this detracts a little from the overall result it doesn't stop anyone from enjoying one of the greatest shmups of the 16-bit era. I never heard of any other Aprinet or Soft Vision product other than a racing game starring Satoru Nakajima, which makes me kinda sad.

If you go to the options screen you can play a mini-game where the objective is to bomb the moving ships within the board (no light gun support, sorry). Depending on how well you perform you're allowed to select from a certain number of stages upon starting the game.

Extends in Eliminate Down are score-based: the first one comes with 300.000 points, and for each 500.000 points afterwards you get a new life. Since every life in stock is converted into an enormous bonus upon game completion, the less lives you lose the more you score. I managed to achieve a no-miss run on NORMAL, and the result is in the picture below. 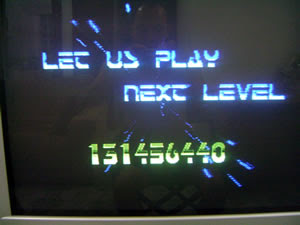