Arrow Flash was one of the earliest shmups to grace the Mega Drive library, back in 1990. I didn't have the chance to play it back then, but the name always struck me as being cool, and definitely lured me into trying it. A couple of years ago I finally had the chance to do it, and much to my dismay it wasn't what I expected at all. I didn't hope to come back to it so soon, but thanks to a recent discussion at the Sega-16 forum page for the game this last weekend I felt the urge to play it again and try to top my previous 1CC high score.

Macross and Gundam fans never got any of their games on the Mega Drive, but Arrow Flash is the closest you can get to these beloved series. You pilot a spaceship that's able to switch between a jet and a robot, and the firepower behaves differently with both forms. Inside the cockpit is heroine Zana Keene, who bears the responsibility to save the Earth all by herself from vicious outer space Viking terrorists. This was taken directly from the manual, but don't get your hopes up just yet. After all, there's absolutely no Viking motifs whatsoever in the game design! 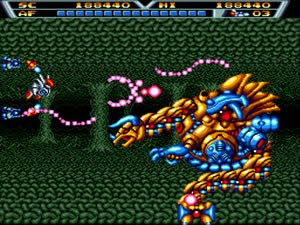 A deadly encounter against the 4th Viking guardian

Speaking of design, all 5 stages are comprised of at least two sections, the first one with a unique scrolling background and the second part with a more ellaborate course. The exception to this is the first level, where you fly above the clouds and halt for some seconds as a huge spaceship crashes in the background. Three aspects stand out throughout: (1) the simple yet abundant parallax, (2) the aggressive use of colors and (3) the distracting, oddly implemented backgrounds in some stages. In the second part of the 2nd stage the background layer scrolls backwards, and both first sections of the 3rd and 4th stages are so flashy and confusing they might make you dizzy. It takes a while to get used to them and not die due to the colors swirling and blending everywhere.
While graphically Arrow Flash doesn't do anything wrong, it's reasonable to say it oozes the term "generic" when you consider the music. It's downright bland, corny and at times plain grating. This is a vivid example of a game that gets self-shafted by a lousy soundtrack. The only glimpse of coolness in the music is the BGM for the first section of the 4th stage, it's just too bad inspiration was lacking in the development team.

Lack of inspiration can also be associated with the challenge level, even though the gameplay aspects are not so bad. Initially, both the jet and the robot fire the same type of shots. They only start differing when you get F icons, which add Gradius-like options to the ship (maximum of 2). When in jet form, the options follow it around as shadows, while in robot form they remain in a fixed 45º rear formation. Each form also has its specific way to deploy the AF special attack (the "arrow flash"). When in jet form, a series of quick forward shots is discharged, while in robot form an energy aura surrounds the ship and makes it invulnerable for a little while. AF can be set to stock or charge in the OPTIONS menu. As its name implies, in charge mode it's possible to use the AF any time you want, but you need to charge it first by holding the activation button. Stock mode causes several A icons to appear throughout the game, adding to the overhead AF stock for immediate albeit limited use.

The main weapon can be selected among three types of laser with the appropriate power-ups: (I) forward blue lasers, (II) yellow shots and (III) wave laser that resembles the red shot in R-Type. They can be upgraded three times by taking the same power-up. Other icons include S (speed-up), E (3-hit shield), M (guided missiles, up to 2) and 1UPs. Score-based 1UPs come for every 150.000 points. There's nothing special about scoring in the game, with the exception that every single power-up collected is worth 1.000 points. However, taking too many S icons will certainly make the ship harder to control.

The opening animation and the cool ending picture are a valid attempt at giving Arrow Flash a little more flair, since the game itself doesn't do much to stand above mediocre. It plays by the book and refuses to do anything beyond the basic. And when it tries to do it what we get is an exaggeration of swirling and confusing backgrounds. At least the game is quite easy so there's no potential for hate, instead resulting in another commonplace, easily forgettable shooting experience.
My new high score shows an improvement of 10,5% over the previous one. In the 1CC run from the picture below the game was played on NORMAL, stock mode, and no lives were lost. 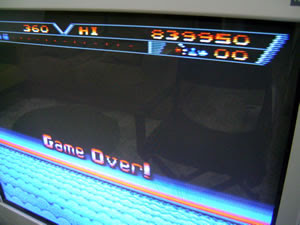