When joining forces under the common label Nazac, Compile and Naxat Soft produced and graced the PC Engine CD with two shmups in the same series, even though they aren't anything alike. The sole aspect shared by Spriggan and its sequel Spriggan Mark 2 - Re-Terraform Project is a story-related detail about their mechas being built out of the same alien material from planet Mars. Other than that both games couldn't be more different in concept, execution and gameplay. The first one is a vertical shooter with lots of fantasy elements, whereas the second game veers into pure futuristic Gundam-style sci-fi territory in a horizontal shooting fashion.
Spriggan Mark 2 is also notorious for its lengthy story segments with plenty of cut scenes, narration and in-game dialogue. If you're the kind of player who likes these foreign elements in a shooter you'll be in for a treat, as long as you're able to understand Japanese of course. Everybody else can at least be content about the ability to disable all this mumbo-jumbo in the options, which then turns the game into a regular shooter where the general idea is to battle an enemy armada of mechas and mechanical bosses while controlling more advanced mechas of your own as you progress though the game.
The change in style comes with lots of visual flair since graphics are colorful, diverse and full of several layers of beautiful parallax without any slowdown. The soundtrack on the other hand is a little hit-and-miss, but in its best moments sounds very similar to the electronic style of Compile's own Robo Aleste. Sadly the audio balance is strongly biased towards the sound effects, making it hard to listen to the songs whenever there's any action going on. 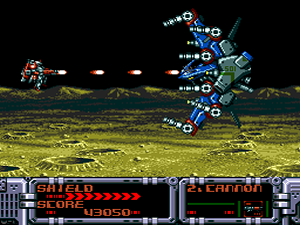 Fighting on the surface of the moon
Controls seem simple on a first glance, but the gameplay goes a bit deeper than just pressing buttons. Button II fires your selected weapon, button I toggles shot direction and SELECT is used to choose the desired weapon. Weapon choice can also be done by pausing the game (button RUN), but the main purpose of doing it is to select your flying speed. All mecha variations are equipped with a basic cannon with unlimited ammo but the resources are limited for remainder of the arsenal. Whenever the ammo for a specific weapon is depleted you can't use it for the rest of the level. This alone requires at least a minor degree of strategy in order to get through the levels properly, even though the game isn't really taxing throughout most of its duration thanks to the shield/energy bar recharging slowly whenever you're not taking any damage. There are no items at all to be collected in Spriggan Mark 2.
Now here's the main catch: keeping the shot button pressed will not fire any of your non-basic weapons. If you do that you'll only get the basic cannon stream (with the glaring exception of the saber), so in order to trigger them you need to actually tap the button. Although weird, I must admit that this is a nice way to deal with the gimmick of limited ammo in a shmup. You can of course use a turbo controller to get regular autofire by holding the button, but then you'll be at the mercy of running out of precious ammo when you need it the most.
It's a fact that something still feels off in the gameplay, which tends to be clunky in regards to dodging especially during boss fights. That's why it's so important to memorize the order of the available weapons to better deal with enemies or enemy formations. Once you nail this mechanic the game becomes less of a mess, unless you absolutely don't mind pausing it to perform weapon choices. Another important realization is how efficient the saber is against enemies that allow you to get close to them without taking damage. It can even be used to block bullets!
Having allies fighting by your side is a great idea in sci-fi shmup with important story elements like Spriggan Mark 2, but the constant flow of mecha and ship allies that help you throughout the game is another source of confusion, at least upon a first contact. Since they often look like the enemy forces, it took me a while to get used to it and not lose precious time and resources trying to take them down. It's quite neat, however, to see some allies commit the ultimate sacrifice by ramming enemies and bosses in order to strike the final blow against them.
First stage of Spriggan Mark 2 - Re-Terraform Project
(courtesy of YouTube user Ryusennin)
Going by how intense the in-game dialogue is (the little I've seen of it), I bet the story details behind the abovementioned sacrifice moments must be quite engaging and extend much beyond what we get to see during the game. An example happens at the end of stage 3, when you are destroyed and start to control another mecha right away, an occurrence that precedes the choice you need to make prior to the beginning of every level afterwards. A total of six mechas will be available by stage 6, yet it's then obvious that the best ones are mechas E and F.
As an example of the style clash between Compile and Naxat Soft, Spriggan Mark 2 - Re-terraform Project isn't quite the experience you'd expect, especially considering how solid the first Spriggan was. My impression was that Compile had a bigger say in the actual gameplay, whereas Naxat Soft took care of the storyline aspect. It's interesting that the offensive option weapon, for instance, behaves just like the search option formation from MUSHA, targeting and chasing after enemies around the screen. The game's overall results are a mixed bag though, which is understandable seeing that this was Compile's only horizontal shooter. Unlike Spriggan, the game was left out of Naxat Soft's Summer Carnival series, so there are no score attack or time attack modes this time around.
My 1CC result is below, playing on Normal difficulty. Since the screen gets stuck after the end credits are over players are forbidden to see the high score table, so you have to be quick once the final boss dies if you want to get a record of your final score. The series continues with Spriggan Powered, released for the Super Famicom in 1996. 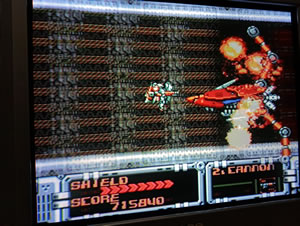