The inrush of ports of PC titles released on the Dreamcast by French publisher Pixelheart has included quite a few shmups in the last couple of years. Many of them have been developed by Astro Port, whose complete catalog seems to be bound to find its way to the defunct Sega platform through the hands of Pixelheart. One such example is Supercharged Robot Vulkaiser, a cheap take on the horizontal shooting formula that should please those who dig those old Japanese serials from the 1970s.
On the outside the packaging and the art that comes with it is rather cool, with a reversible manual/cover for Japanese/US versions. Unfortunately the actual port to a less powerful system didn't get any sort of proper treatment, even in graphical terms. Absolutely no changes were implemented over the original version on Steam, and when I say absolutely I mean it. The game itself isn't unplayable despite the expected decrease in frame rate, but good luck reading any text or numbers such as your hard earned scores, for example. The people responsible just cramped the HD resolution into the CD format without any downscaling, which hurts the eyes on everything that requires a little more detail.
Note: I used (as always) a default composite cable on my Dreamcast. 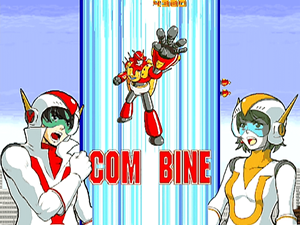 Needle kaiser combine, go!
Simple and straightforward is the name of the game in Supercharged Robot Vulkaiser. Button A (shot) is pretty much what you'll use all the way, since button X serves to deploy a bomb attack than can be triggered only once per level and varies according to the attached "kaiser" fighter, an enhancement pod that's activated by collecting the respective icon that appears floating from the left side of the screen. Each of the four available fighters replaces the default firing pattern with a more efficient shot type: rocket (special attack is an impact bomb), needle (special attack is a larger spread shower), thunder (special attack is a huge laser beam) and drill (special attack is a drill that slowly moves forward).
The special attack mentioned above becomes available when the charge gauge is full. Just let go of the shot button to unleash it. The lower HUD on the left side of the screen shows this charge gauge and also the energy bar for Vulkaiser itself (the robot) and a smaller energy bar for the kaiser fighter. The corresponding character is gone if the energy bar is depleted, which means the lost kaiser fighter is gone for the rest of the game if it "dies" while you're using it. Obviously a depleted bar for robot Vulkaiser means GAME OVER, no continues allowed. Whenever a kaiser fighter is lost you revert back to the default shot, and the special attack in this case is the detachment and launch of the robot's fists.
Preserving health/energy is of course the most important strategy to succeed in the game. A determined amount of health is recovered for both the robot and all kaiser fighters at the end of the level, but getting there with a sliver of energy won't help much. Bonuses for energy left and time performances on boss kills are also given in between stages, which actually respresents the most precious resource if you're playing the game for score. After all, the multipliers you see during the level as you kill enemies in quick succession don't account for nearly as much in the final score tag.
Original trailer for the PC version of Supercharged Robot Vulkaiser
(courtesy of YouTube user curiousfactory)
As I mentioned above, the porting job of Supercharged Robot Vulkaiser to the Dreamcast is as lazy and lackluster as it gets. The game is still quite colorful though, the low budget somewhat compensated  by harmless humor and creative designs for bosses. The core gameplay isn't affected at all, but the drill kaiser is simply an awful choice of fighter and should be avoided at all costs (beware of fighter icons coming from behind and latching to the robot in the heat of the battle). Just like in the original, a glowing point in Vulkaiser's chest shows his hitbox whenever he gets too close to bullets and enemies.
It's reasonable to assume that players tend to get used to the game's resolution (which makes it impossible to see your scores during the stages and barely allows you to glimpse the lower HUD, for example), but unfortunately you also need to deal with a couple of silly functional oversights in this port. Once you choose between English and Japanese after the disc is booted, for example, you're greeted with an extremely low-res intro that can't be seen again unless you reboot the CD. And even though the instruction manual mentions a pause function in the Start button it's just impossible to pause the game either in the regular campaign or in the Training option, which allows you to practice the stages you have already reached (the lack of a pause function is actually inherited from the original PC game). Many people also reported freezing problems in the port, but it only happened to me once in the first level.
My best 1CC result in the Normal difficulty (Glory Hunter) is below. It reads 12.022.207 points, I tried to get the best possible picture after tweaking the settings on the TV! 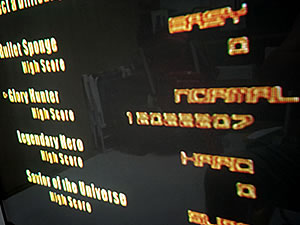