Sometimes protection is everything. Everybody knows how upsetting it is to play late stages of a Darius game with a bare ship. Or the despair that comes with cruising a tight area in any R-Type without the help of the force pod. It’s as if you’re missing an arm or a leg, that’s why in shmups shields are life. And if you’re the kind of player who cherishes shields and enjoys having them at all times regardless of how many bullets they need to block, then Prismatic Solid is right up your alley. It’s prismatic, it’s solid and it’s got shields. Of the colored type, on top of that. In fact, you can easily rename this game as "Color Orgy" if you so will.

Up front one thing is undeniable: the slick visuals and the spectacle of particles are amazing for a game released through XBLIG for a measly buck. Sparks and shards fly with gusto from every destroyed enemy as pulsating bullets and vivid lasers flood the screen once the action picks up. The adventure is eye-catching and oozes style, so it’s no wonder Prismatic Solid fulfills the initial tough task of luring players into the gameplay. Keeping the momentum, however, is always a whole different story.

Considering the Japanese are crazy for bullet barrages and intricate patterns, as far as difficulty goes the small Japanese developer responsible for this little game was certainly able to strike a decent balance between “casual” and “not so casual”. All things considered, it works. The array of influences includes the likes of Xexex and Silpheed, plus another one of those obvious nods to Xevious in the flying invincible monolith areas. “Destroy the core” is another unspoken staple of the genre – those familiar with any Gradius game know very well what I’m talking about. 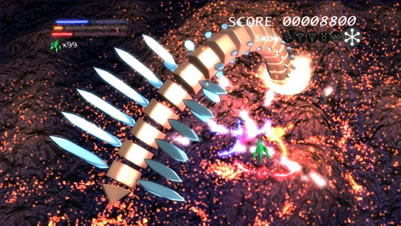 A shardy-slimy first boss in the Ridge area

Most of the content of Prismatic Solid lies in the realm of abstract design, in a minimalistic approach that gets slowly beefed up as you reach successive loops. The difficulty increase during the levels themselves isn't that taxing, but all bosses are doubled in the second round and tripled in subsequent loops. It all starts with a bare ship, three upgrade bars for each shield filament (blue, yellow, red) and six weapons readily available for use. Fire with button A, cycle through weapons with the bumpers (LB and RB) and sacrifice a little of each color's power to trigger a bomb blast with buttons X, Y and B. For a faster grasp of the function of each button, note how all shields and their respective powers match the native colors of the Xbox 360's controller. And the spaceship is green, which is a pretty cool touch (in any case, controls are fully customizable).

Contrary to what we’d normally think, the little colored stars released by specific enemies in each level serve only to increase the reach of each corresponding shield and not to actually upgrade firepower, therefore weapons remain at the same power level at all times. From left to right you have homing (pink), split (Y-shaped yellow spread), 3way (red), rainbow (multicolored straight shot), shower (all-out blue spread) and snow (white all around scatter shot). Each selected weapon alters the position of the three shields, which are designed exclusively for defense and whose degree of frontal protection is inversely proportional to how focused/straight the shot type is. They can’t be tossed away like the flint from Xexex, and even though their filaments move around as you move the ship they never deviate from their fixed positions.

Such a defensive style of gameplay is bound to disappoint players who enjoy heavy dodging. Actually, if you stick to the shower weapon, which protects you from everything that comes from the front and the sides, you can bet your life Prismatic Solid gets heavily unbalanced towards defensive play. Okay, you might lose some points by sticking to shower, but it’s the safest way by far to advance in the game. Getting hit with the shower weapon is only possible in the case of collisions, large laser beams in the face or if you’re moving like crazy and a stray bullet manages to get through the moving strands of those maxed-out shields.

Some notes I can share on what I learned: the split shot is the best choice to create gaps during the xeviousy monolith areas; bombing comes with a brief stint of invincibility but my favorite one is the red, which sends an outward laser circle that's perfect to clean the screen of incoming enemies from all sides.

Low difficulty aside, Prismatic Solid is a gorgeous game to look at, yet I can’t help but wonder what it could’ve achieved had the developer had more resources at hand. Polygons play a large part both in the enemy as well as in the stage design, that's why I expected a little more boldness from its usage in stages 3 and 5. They scream Silpheed all over but lack the cinematic edge that made it such a classic on the Sega CD. Granted, we still get trippy sections with lots of insect-based zakos that seem to have been lifted directly from Exed Exes. I like the fact that in further loops bosses finally put those shields to the test by cluttering the screen with thick lasers or solid matter, whereas textures and colors are drastically changed. The water level is particularly interesting since there comes a point where it seems you’re flying over a pool of blood instead of water.

To make up for the lenience on dodging, the good news is that there is at least a proper scoring system in place that rewards both survival and performance. For instance, every power-up star is worth 500 points once its energy bar is full, so it's possible to reap a nice deal of extra points for not bombing. Upon arriving at the terminal (a fancy expression for beating the game) all extra lives + energy are converted into points before the next loop starts with the default life stock. With an extend routine that grants an extra life at every 30.000 points, who can be blamed for adopting an overly defensive attitude just to squeeze the most of out this final bonus? Beware though: if you beat the 5th boss on your last life you get a negative reward!

Even if Prismatic Solid sounds like a wasted opportunity for something bombastic gameplaywise, it's still reasonably fun to warrant a little of anyone’s precious time. The game was also made available for download on the Playstation 4 in 2015, but I have no idea of any relevant differences from the original XBLIG version. As seen in the high score table below, in my best run I was able to reach stage 4-4. 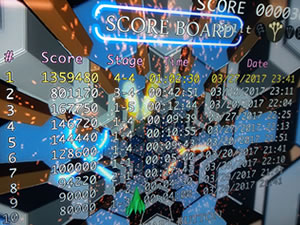