Second and final entry in a limited series of shmup/platforming hybrids on the Super Famicom, SD Gundam 2 graced Nintendo's 16-bit platform almost at the same time as the first installment SD Gundam - V Sakusen Shidou, which was released in the previous year without much of an impact in the gaming scene. As a consequence, both games still remain obscure oddities mostly known by Gundam fans and stubborn people such as myself. So here I am doing my part in spreading the word out there for those who want to know a little bit more about them.

The story of SD Gundam 2 picks up exactly where the first one ended, but now the player can choose three different paths represented by the choice of three big-headed chubby robots. The paths are different because each one of them has a specific set of stages, so we kinda have three different games in a single package even though some levels or bosses appear in more than one storyline. These courses also differ a little in length since a few stages are split in two halves, but their overall duration isn't too long. Cooperative play is also available, but I didn't check how the stages unfold when two players join forces in the battle against an army of cute evil robots. 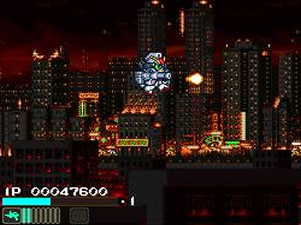 Bringing justice to cities in flames

Button Y shoots and button B is used to jump (platform areas, double jump is possible) or turn the character left/right (shmup areas). Besides the general gameplay style, the one thing that's preserved from the original game is the basic upgrading scheme. The power-up bar fills up automatically and lights up the upgrade slots, which must then be selected with buttons R/L and activated with button X. The first one is the rifle laser, the second is the power bazooka and the third one differs according to the chosen character. A fourth selectable slot actually corresponds to the special attack made available by collecting the blue item that appears every now and then and is also character-specific; white items refill a portion of the health bar and golden items fill up the upgrade bar instantly with a few bonus points on the side.

The best news about SD Gundam 2 is that there's no ammo constraints for weapons and autofire is implemented by default. On the other hand, getting hit sends you instantly back to the default pea shot (with only one exception, keep reading). If you played the first SD Gundam then you know how much of an improvement this is: on top of relieving you from dealing with speed-ups, the new upgrade method also allows an almost immediate return to the lost weapon if you manage to avoid getting hit for at least the time it takes to fill up the upgrade bar again. The close-range automatic melee attack is still there lest you happen to be surprised by an enemy at point-blank distance.

Here's a brief description on the behavior of the three available Gundams regarding the third upgrade and the special attack (blue item):

SD Gundam 2 will not set anyone's world on fire, but it's surely an improvement over the first game. Despite the short gap between both titles, it's clear that Bandai seems to have tweaked the gameplay into something less contrived than what we got the first time around. Not only are the inputs more sensibly executed, but the game moves faster, the enemy gallery is a bit more varied and the AI is much less annoying, which makes the whole experience easier and more fun regardless of the chosen character. Speaking of which, my favorite of the bunch is the middle one due to the ability to turn him into a spaceship even during the platforming parts (if you play well enough you don't even need to use the robot form at all). That's quite nice since SD Gundam 2 feels a little more biased towards shmupping, as opposed to what happened in SD Gundam - V Sakusen Shidou.

The Versus mode now has 10 selectable characters for head-to-head combat either in a space colony setting (platforming) or in outer space (shmup style). Once again this fighting alternative offers nothing more than mindless button mashing chaos.

I beat the game with all three robots, and soon realized that the course for the RGM-179 robot has the best scoring potential. That's the robot I used in the 1CC high score shown below (Normal difficulty). For every 40.000 points you earn an extend, but this time there's no end bonus based on life stock after the game is completed. 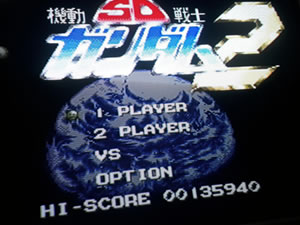