No matter where you come from or the influence you might carry from early gaming memories, there's no denying that insects in space is quite a charming idea for a shooter. Dangerous Seed on the Mega Drive is yet another attempt at an insect-based shmup as seen from the game cover, which shows your mighty spaceship dodging the web clots of a hideous-looking spider. The results are of the mixed kind though: there are some cool bits here and there, but later on the game kinda deviates from its core and ends up lacking any wow factor, such as those seen in Insector X or Bio-Hazard Battle. Or perhaps horis are better suited than verts for that, I don't know. At least during the 16-bit era.

Port of an arcade title released a year before, unfortunately Dangerous Seed didn't make it out of Japan. It also doesn't quite push the Mega Drive hardware in any way, both in terms of graphic design or gameplay, taking more than a few liberties with the source material in order to make it more forgiving. It sort of follows the path Namco was taking with its shooting division after the release of Dragon Spirit, even though I heard or read somewhere that the game was at one point supposed to be a spin-off sequel to Galaga. How weird is that?

The upgrade system is rather unique in Dangerous Seed. In the first couple of levels you play with the alpha (α) ship, then it gets combined with the beta (β) ship during stages 3 and 4 and finally merged with the gamma (γ) ship prior to stage 5. Each ship has its own 3-cell life bar, if you lose a ship you'll lose its power while the other ones remain, and if the last one crashes before you reach the boss the game sends you back to the start of the level (bosses are their own checkpoints). Commands work with A for shot, B for bomb and C for ship combination, meaning you always need to choose a leading ship if you've got more than one, that is, from stage 3 onwards. Each ship arrangement, called Moon Diver, provides distinct bomb types and a different shot pattern based on the power-up you've chosen with your item pick-ups. Come to think of it, it's actually a rather complicated system, one that I only really grasped after I had beaten the game once or twice.

Picking up the items released by specific enemies is essential to keep a steady survival chance throughout the game. You need at least two speed-ups (S) to dodge decently, and then five of the same colored power-ups (P) to max out your firepower. The colors cycle between green (default/forward shot), blue (thin laser) and red (wave shot), and as I mentioned above the effectiveness of each one is directly related to which ship you select as the leader (α, β or γ). Early on I decided to just avoid the laser like the plague, since it absolutely sucks no matter how strong it might be against bulky enemies, namely bosses.

Other less frequent items are energy recharge (looks like a little tube, refills the energy of a battered ship), ship revive (looks like a big ship, comes up instead of the energy recharge if a ship is down), extra bomb and option (O). The O only starts appearing a few stages into the game, but it becomes a great aid if you can collect four options without getting hit. Getting hit, by the way, causes the firepower of the leading ship to downgrade, and getting hit successively can even put you in a very weak status. Even though the game seems to grant you nine hits before dying (3 per ship) there's absolutely no recovery window upon taking damage, so beware. A complete, healthy ship can be instantly lost if you happen to crash against a large enemy.

Despite the departures from the arcade gameplay, all of which serve to make the port a much tamer challenge, Dangerous Seed at least keeps the original atmosphere. Pacing is overall slow despite some brief sections where the scrolling accelerates, with ship mechanics that share close traits with Terra Cresta and Slap Fight. Adding four extra short stages with recycled enemies and bosses at the end was an unnecessary move by Namco – instead the company could've used those resources to give a little more polish to graphics and music. They're not bad but not remarkable either, whereas the gameplay suffers from slowdown whenever the screen gets too cluttered. Well, at least the slowdown is not of the stuttering type, nor is it accompanied by flicker. 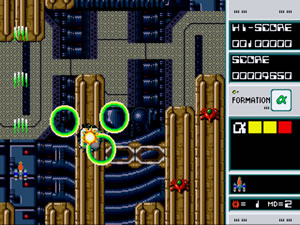 Chasing higher scores in this game involves everything you might expect from a 16-bit shooter, starting with "don't get hit and kill everything in sight". Sticking to the same power-up color is also interesting since each extra P when maxed out is worth 1.000 points. Milking checkpoints and projectiles is another possibility, one that fortunately doesn't break the game in regard to bosses. They're often very large and require you to move around a lot, so no matter how careful you are with your milking they will eventually receive enough damage and die. Still when it comes down to bosses, a nice treat that was preserved from the arcade is the choosing of alternate paths in stages 5 and 6: all you need to do is time out the boss to play different subsequent levels. Most of the changes are in enemy sprites being overhauled, but I haven't tried to see if the alternate stages have more scoring opportunities.

Another strange thing about the port are the Easy and "Digest" difficulties, which only let you play a few selected stages (9 on Easy, just 4 on Digest). Beating the game on any difficulty triggers expert mode, which increases the size of the enemy bullets and provides a whole different kind of challenge (it's possible to enable it any time at the start screen by pressing ↑ ↓ ← ← → → ↑ ↓ as soon as the attract mode begins). Extends are given with 100.000, 500.000 and one million points across all available modes.

When you figure out the power of the bombs and notice the absurd amount of bombs the game gives out like candy, Dangerous Seed becomes an even easier challenge. This doesn't take the fun out of it, nor does it improve its primitive fun factor if that counts for something. During my time with the game my favorite weapon was the wave shot (red) with formation led by the α ship, and here's my best 1CC high score on Normal: 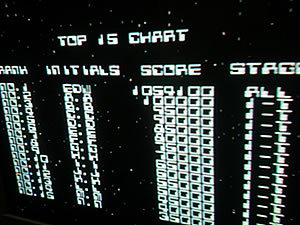