War in the Gulf (NES)

The Gulf War wasn't even over when NTDEC a.k.a. Mega Soft delivered another unlicensed shooter based on the conflict for the NES, in an opportunist move that can't be taken for granted in their little corner of 8-bit history. War in the Gulf, or La Guerra del Golfo as displayed in the Spanish Gluk cover, is probably the first video game to use that particular piece of history as background, as much as that might mean for such a rudimentary shooter. On its behalf we can say it's got a true seal of authenticity in the presentation panel for the final level, which features a rendition of Saddam Hussein as you enter his "underground palace" to put an end to the war.

Given the game's main aircraft choice, there's certainly some confusion when you notice the cover shows a fighter jet in action instead of a badass chopper. Not much to comment on that front, but within Mega Soft's library of piss-poor games there's no denying that War in the Gulf is the best of them. With the exception of the occasional weird hit detection and a handful of cheap hits/deaths, the game at least manages to show a little variety throughout five stages graphically molded after clouds, ocean, desert, airport and fortress. It's a poor man's Silkworm meets Airwolf, but it's certainly above the inept results of Magic Carpet 1001 or Sea of Dreamland. 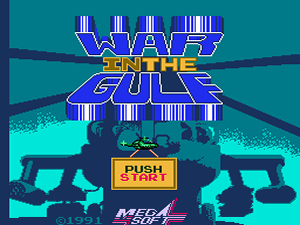 In order to wage war against the evil dictator that set the Gulf on fire, players pilot an attack helicopter that shoots with button A and locks a rotating satellite in place with button B (a "machinegun" that doesn't shoot anything). Up front I can say button B is useless, mainly because this satellite thing has very little health, inflicts very little damage and disappears quite fast. Therefore you'd better just use it as a shoddy shield while it lasts. Then you can explode little balloons to release the following items to upgrade the chopper: power-up, missile, S (speed-up) and 1UP (extra life). The first power-up grants autofire, the second one increases shot power but takes away autofire and the third one finally allows you to use autofire with the power upgrade. Missiles are fired along with the main gun, resemble the same artillery from Darius and are upgraded with their specific item.

Whenever you pick a power-up you have a hit's worth of life. This means that the chopper will revert back to its default power when you get hit. As expected, you lose a life when shot in that condition, so do your best to survive until the next power-up comes (remember that speed-ups and missile items do not grant you with this pseudo-shield). At selected points in the level a little blue cloud either appears or might be released from ground targets. If you shoot it long enough it will act as a smart bomb, exploding and wiping out all on-screen enemies. If you fly into it the cloud will act as a temporary shield that protects the chopper for some time. Either way it's a very useful item that helps you get through some of the most cheap or erratic enemy patterns.

Speaking of cheap, much of the difficulty of War in the Gulf comes from enemies entering the screen in odd angles or attracting you to trap spots. Since the main gun totally lacks spread capability, in many occasions it's best to use the chopper's bending effect to hit the targets: shots are aimed diagonally downwards as you move forward and diagonally upwards as you retreat. The only way to have a flat horizontal firing stream when moving is by going up and down with no diagonals, which is needed when facing most bosses. They are all ridiculously easy, so easy in fact that you might die from boredom, as in the fight against the giant tank of the 3rd stage. The last cannon has too much health, the first time I got there I almost fell asleep while thinking the game had bugged on me.

Besides the 1UPs you collect during the levels there are also score extends at every 200.000 points (a characteristic sound cue plays when the extra life registers). Don't bother checking out your score though, it's only shown during stage transitions and it's ultimately failed by sloppy programming. Even though the scoring system gets utterly broken by the jet shower of the last boss, in a single-credit clear the final figure that goes into the hiscore record is the one that's shown at the beginning of stage 5 (similar idiotic implementations are also present in Crisis Force and Crossfire, for example).

As I mentioned a few paragraphs above, this is probably the least offending NES title developed by NTDEC / Mega Soft (I've yet to play Go! Benny! and Cosmos Cop, but I seriously doubt they'd be any better). In between the humble graphics, the equally modest music, the slow pace and the botched score display/mechanics, War in the Gulf at least doesn't incur in anything funtamentally wrong in its gameplay. The short opening sequence and the single panels that precede each level provide a nice touch in establishing the mood, even if this mood gets diluted by the simplicity of the package.

On the way to the 1CC on Normal difficulty I had the high score below prior to starting the final level, and once the ending graphics were gone I restarted the game and took this picture between stages 1 and 2. I used a turbo controller for proper autofire on button A. 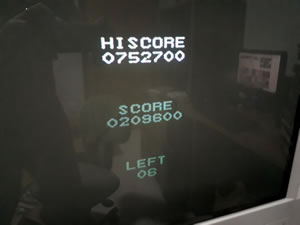 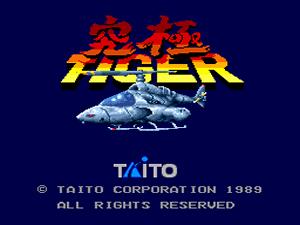 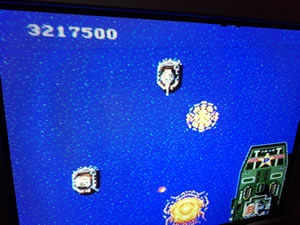