For me, as a collector, one of the good reasons of owning several versions of the same game across multiple platforms is that replaying them can always be done as if you were trying a new title, only with a head start thanks to all the experience you had in previous contacts with it. In the case of Gunbird, I had already tried the Saturn and the Playstation versions, looping each one with a different character (Yuan-Nang and Marion, respectively). So for the port that's present in the Gunbird 1 & 2 compilation for the Playstation 2 my choice was again for another pilot: slow-ass Tetsu and his pedalcopter.

Gunbird 1 & 2 was only released in Japan and Europe and stands as a nice package for this sympathetic little franchise. Granted, it's basically a bare bones collage of both arcade games, but the addition of a TATE mode is more than enough to warrant the purchase in my opinion. I reckon by now I should be aiming for Gunbird 2, but since I have always been a little terrified by the idea (the same goes for Dragon Blaze), being drafted back into the first game kinda makes me happy for enjoying some more lighthearted Psikyo fun and keeping the prospect alive of someday venturing into the colorful raping fest of Gunbird 2.

But I digress. Back to Tetsu. 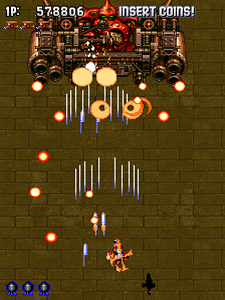 Tetsu faces one of the multiple forms of the Trump pirates

Tetsu is, along with Ash, the most controversial character of Gunbird. He is openly homossexual, Ash is a pedophile. While Ash carries this adventurous, seemingly overconfident persona, little is to be seen of Tetsu's countenance due to his thick white beard. As the story about finding the missing pieces of a magic mirror goes on, character interactions are played out with light humor in brief dialogue panels that appear prior to and after boss confrontations. Of course none of this really matters in the Japanese version of the game (unless you're able to understand the language), and even so the character's traits are only important for those who care more about storylines than the actual gameplay.

The action in Gunbird is based in three inputs: shot, rapid shot and bomb. Rapid shot and bomb are self-explanatory, while shot can be charged for a more powerful attack by holding the button and releasing it once you hear a specific sound cue (while charging the character isn't allowed to shoot). Charging times and bomb/shot effectiveness varies a little for all five characters, so it's advisable to try all of them and see which one fits your play style. I used to think very lowly of Tetsu, but now I believe he's actually got the most powerful bomb of the ensemble. Its slow-moving fiery trail inflicts tons of damage and is devastating on bosses, but you need to cope with the triggering delay and eventual failure in blocking enemy bullets.

Special enemies release power-ups and extra bombs. It takes three Ps to max out the shot pattern, and each next power-up will be worth 2.000 points as long as you get it before the power down cycle expires and you lose one power level. That's why sometimes it's better to let the items float around before picking them up, though not too long to the point that they will leave the screen. The maximum number of bombs you can carry is six, with further ones resulting in extra points as well. Gold ground coins also contribute a little to the score, as well as the multiple boss parts you're able to destroy. There's only a single extend that comes with 400.000 points.

Going the distance without dying is nice but has a direct effect in the gameplay, which becomes progressively harder. This rank system is pure Psikyo, and if you played any of their games you'll know what to expect here. It's possible to use a trick to reduce rank without dying if desired: just touch an enemy and watch as one of your power-ups drifts away (the payoff might not be worth it because of the firepower loss though). The game also has a random factor in the stage order: one of the four starting levels (castle, factory, woods, village) is always randomly left out of the loop, and the order of the active three is also randomized. Then four increasingly weird stages unfold until you face a Gremlin-like final boss. An interesting feature of this PS2 port is that you can do away with the stage shuffling in the options menu. There's also a comprehensive practice mode where you can choose stage, character, power level and bomb stock. Very helpful indeed. No loading times and a proper save function complete the package.


Stage 6 in full, including a stray bullet through a bomb blast against the boss

As short as it might seem to many players, Gunbird definitely has that one-more-go factor and is a good representative of the fantasy branch in the shmup genre during the 90s (as is Strikers 1945 for military and Sengoku Ace for flying samurai, in the case of Psikyo). While not a stellar entry, its inherent charm becomes more and more clear as you learn how to use the different characters to overcome the quick, occasionally dense enemy bullet clouds. In essence, it's a short, fun little shooter. And if you're skilled and patient enough you can always face the even crazier challenge of the second loop and its suicide bullets in order to see the definitive endings.

I was able to loop the game a few times with Tetsu in the default difficulty level (5), but didn't get any further than stage 2-1. Playing exclusively with Tetsu for a while and then switching to any other character can be shocking due to how slow he is. Below is the final score table after this quick comeback round (remember that continuing doesn't reset the score but adds +1 for proper differentiation). 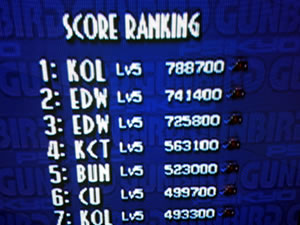 Now the next challenge definitely has to be Gunbird 2.
Posted by Edward at 11:51 PM No comments: 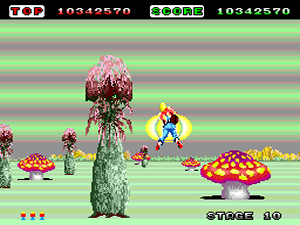 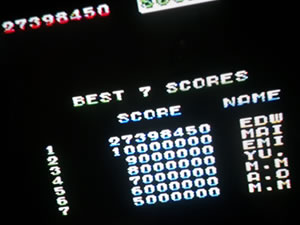