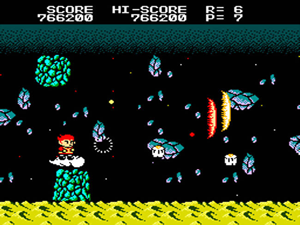 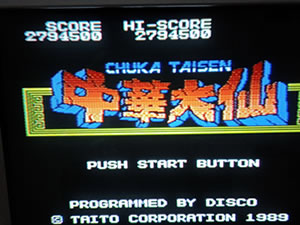 Three years after Darius Gaiden, the famous shmup series where you blast fish and sea monsters in outer space returned to the spotlight with G Darius (or G-Darius, as some prefer). A huge change in style and one of the biggest shmup efforts from Taito before the company slowed down its activities, G Darius is the fourth installment in the arcade series but also the sixth completely new entry in the franchise if you consider console outputs Darius Twin and Darius Force / Super Nova. The first port came out for the Playstation one year after the arcade release, with the new 3D polygon-based graphic design as the main selling point of the game.
Apart from the remarkable shift towards 3D, something that was expected during that time especially after Taito delivered Raystorm, G Darius keeps the trademark gameplay that combines enemy waves and environmental hazards with gigantic bosses preceded by the famous WARNING message. However, this time around the splitting path mechanic adopts letters from the Greek alphabet to determine the stages, with a total of only five stages instead of the customary seven. Each level has two sections though, with the second one being selected by standing above or below a green centerline that appears halfway the level. The designation for each played area comprises both the Greek letter and the corresponding Roman character of the splitting path, such as αA or αB, δG or δH, etc.
The game harks back to the roots of the series in its upgrade system based on colored orbs, with red for main shot, green for bombs and blue for shield. When the specific gauge for each ability is filled a major upgrade is granted, and every time you die the ship is respawned with this basic upgraded level instead of going back to its default state. There are also purple orbs which add to the stock of capture balls, expanding on an idea previously seen in Darius Gaiden to provide the foundation of the game's intricate scoring system. Finally, hitting certain fixed spots in the terrain uncovers extra yellow orbs (wipe out the screen), silver orbs (random point bonuses) or a single extra life in the 4th stage. 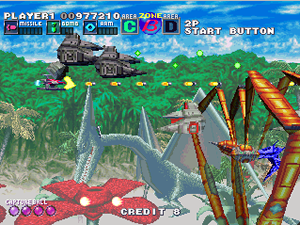 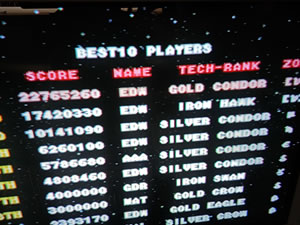 Note: G Darius would later come out for the Playstation 2; it also got a recent HD makeover as G Darius HD for the Nintendo Switch and the Playstation 4.
Posted by Edward at 9:05 PM No comments: