Aces of the Luftwaffe Squadron (Playstation 4)

Originally launched in digital form in 2017, Aces of the Luftwaffe Squadron is the direct sequel to Aces of the Luftwaffe. While the first one is a weird vertical shooter disguised as a horizontal thanks to its original mobile roots, the sequel is a pure vertical romp aimed at modern gaming audiences: instead of adopting the well known arcade structure of the shmup genre it uses stage-specific performances as basis for upgrades and the shooting experience as a whole, with aesthetics based on a World War II military setting with sci-fi undertones.
The retail version of the game includes the complete DLC campaign known as Nebelgeschwader, actually the sole reason for the Extended Edition subtitle. Nebelgeschwader also comes with 25 levels but this time you play as a German squadron instead of the default heroes of the “Squadron One” allied forces, complete with different weapons and enemy formations. In both variations of the game you are allowed/encouraged to play and replay all levels in order to obtain more experience points and maximize the score as a result.
The good news for those looking for an arcade-like session is that no grinding is needed if you want to play from beginning to end in a single sitting. Just note that the complete campaign takes around two hours to complete. 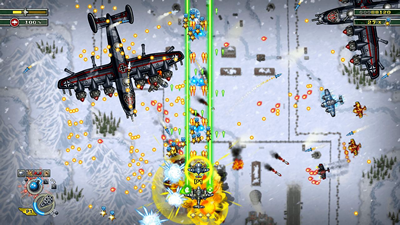 Squadron One under heavy enemy fire
Capcom’s 19XX series is of course the main source of inspiration in Aces of the Luftwaffe Squadron. A slew of cartoonish touches are the main differential in the latter, since you take control of a leader and three wingmen that banter all the time during the game itself. The art design for levels isn't particularly eye-catching, but planes and enemies show a good amount of detail. Controller inputs work like this for the default Squadron One team: button × fires, buttons L1/R1 are used to select the special weapon and button □ triggers it (button ○ has an extra purpose when playing with the Nebelgeschwader squadron). You can’t remap inputs, but in my opinion this is fortunately a good arrangement.
A full campaign has five missions divided in five chapters each for a total of 25 stages (not considering the short introduction part where your squadron is taken down by the final boss). You get five lives for every level, so even if you get through on your last life you’ll start the next stage with a new stock of five. The plane’s health is indicated by a meter that circles the plane and depletes as you receive damage. Each hit from a regular bullet takes away some health whereas cluster projectiles made of many bullets, such as those fired by some of the later bosses, can be instantly fatal. Fire curtains, poisonous mists, lasers and ramming attacks complete the arsenal of the enemy, imposing all sorts of danger as you advance.
The game is pretty self-explanatory regarding item pick-ups, showing brief explanations on how power-ups, medals and skill coins work. Power-ups increase your plane’s firepower, but you need to constantly get more of them otherwise you’ll revert to the previous power level. This limitation in ammo isn’t that contriving after all, even if you’re downgraded it’s not for long because power-ups come in a fairly regular basis. A maxed out Squadron One, for example, will bear an enormous amount of firepower, sending out lasers, wave blasts and shards all over the place for a great destruction effect. The catch is that you start every level with the weakest shot, which requires players to power up the squadron from scratch in every single mission.
Skill coins are used to activate enhancements and special weapons in the Skills menu in-between levels, and are obtained either by collecting medals or by sheer luck in certain areas. The game is balanced enough so that the coins you get are sufficient to enable all or almost all upgrades in a complete run. Other unlockables such as new planes might be awarded when a main boss is defeated – these rewards are random and in the long run players are supposed to replay stages to acquire all of them. Besides the functional upgrades, for Squadron One the most important skills to be enabled/upgraded in my opinion are the "sky bomb" and the "supply request" that immediately summons power-ups.
Official trailer for Aces of Luftwaffe Squadron - Extended Edition
(courtesy of YouTube user PlayStation)
Performing well in Aces of the Luftwaffe Squadron is relatively easy. It’s just a matter of avoiding damage, collecting medals, speed-killing enemies when possible and fulfilling all “side missions” in each level. These side missions range from just surviving to destroying specific targets, protecting fellow planes, dropping supplies, pursuing enemies, etc. There’s even a pacifist level (3.1) where you don’t need to fire a single bullet. The main problem is that you need to get used to the mild level of inertia of the default plane (some unlockable planes have less or no inertia), as well as the odd behavior of your wingmen: one of them goes berserk and starts flying around like crazy (killing you on contact), another is narcoleptic and sneezes all of a sudden (you need to protect him from enemy fire) and the girl is afraid of heights (fleeing when the squadron needs to fly at high altitude). Dealing with these problems well also contributes positively to your score.
Although some of the quirks described above rub me the wrong way, at least they’re not excessively harmful or gamebreaking. Relaxed playing is enough to beat most levels and fulfill all side missions, but from the 3rd boss onwards you definitely need to have some previous knowledge of boss behavior if you don’t want to lose all your lives against them. They’re also the obvious highlights in a game that otherwise lacks intensity and sounds generic and derivative, except for the quite decent atmospheric soundtrack. If you want to skip the constant blabbering between characters just press and hold button ○. I do wonder how they tease each other when there are 4 people playing in co-op though.
When compared with Sky Force Anniversary, which has some visual and functional similarities, Aces of Luftwaffe Squadron is certainly a better choice for the simple fact that you absolutely don’t need to replay levels to beat the game. On the other hand, it doesn't compute your complete score, showing only stage-specific results. The picture below (click to enlarge) has all my stage scores for a total of 4.484.472 points on Normal difficulty in the Squadron One campaign, clocking at 1 hour and 56 minutes of play time. I used the default leader plane from start to finish because the game denied me the flying pancake upon beating the 2nd boss. I didn’t venture into the Hard or Extreme difficulties at all (Extreme is unlocked upon beating the game once), but intend to play the Nebelgeschwader mode on the Xbox One when the opportunity comes. 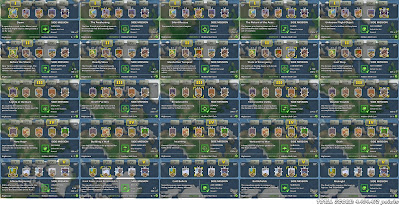