Blue Wish Resurrection is the first PC freeware game I am covering in the blog, and for very good reasons. The main one is that it's loads of fun. And then there's the fact that you can run it on pretty much any computer, anywhere. Finally, in my opinion it represents a great starting point for people who want to get into the world of bullet hell shooters, and here's the direct download link if you want to check it before reading any further. Just unzip the file anywhere, find the executable and run it (for fullscreen change the first character of screen.txt from 0 to 1).

This game is an evolution to Blue Wish, which was released in 2005, and comes before a final iteration called Blue Wish Resurrection Plus, last updated in 2008. They were all created by the same one-man Japanese developer and owe a lot to the works by Cave, most notably Dodonpachi (treatment of weapons) and Ketsui (bullet patterns / scoring system), with lesser contributions by Mushihimesama (game modes), Espgaluda (Accel mode) and even Giga Wing (Blue Hope shot pattern similar to Sinnosuke's).

The inspiration sources mentioned above should be enough to warrant anyone's trust in the quality of this game, even though it doesn't shine in any particular way regarding the graphic design. As implied by its name, a blueish hue permeates the graphics in Blue Wish Resurrection, and while the humble art certainly gets the job done what really shines is the non-stop action dictated by an ever-growing amount of enemy bullets and a good deal of intensity, which of course represents one of the main reasons why Cave games are so rewarding gameplaywise. 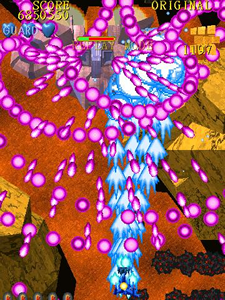 Where do I go from here, boss?

First of all you need to configure three essential inputs: (focused) shot, bomb and full auto (autofire). By keeping shot pressed the speed of the ship will be reduced, whereas bombs behave differently depending on which type of shot you're using. If idle or using full auto a round bomb blast will be detonated right in front of the ship, while a bomb deployed when using shot will greatly enhance your firepower for a few seconds. Both bomb types make the ship immediately invincible during their respective animations. Cave fans will be right at home here, since this is the same scheme used in almost all vertical shooters made by the company.

Game modes consist of Heaven, Original, Hell and Accel. Heaven is aimed at beginners, Original is your regular bullet hell shooter and Hell is kinda like the Ultra mode from Cave games. Accel mirrors the effect of the kakusei overmode from Espgaluda, which makes bullets increase speed as they travel farther, and is chosen by pressing down when the cursor is over Hell. There are initially two ships to choose from, Blue Wish and Blue Hope, which differ mostly in the way the regular shot works. P items are responsible for upgrading firepower, B items grant you extra bombs and golden cubes add to the bonus counter at the top of the screen. Besides these basic gameplay rules a few common staples of the bullet hell shooter are also present in Blue Wish Resurrection, such as the ship's hitbox appearing as you play (focused shot keeps it on even when you're moving) and the presence of health bars for all large enemies so that you know how much damage you need to inflict in order to destroy them.

When talking about the amount of damage on large enemies we automatically go beyond mere survival and enter the domain of the scoring system, which is of course where all shmuppers are bound to arrive eventually. Anyway, the death of a large enemy cancels all nearby bullets (sometimes all on-screen bullets) and turns them into bonus golden cubes. Timing these events in order to convert the maximum amount of bullets must be one of the objectives for score-driven players. Also important and kinda related is point blanking, since the farther you are from the top of the screen the lower the value of the golden cubes will be. Finally, every level has several hidden ground fountains from which golden cubes emerge and are sucked into the ship as long as they're on screen. Just fly over the terrain and shoot these hidden spots to uncover them - obviously the sooner you uncover the chests the more cubes you'll collect in the end.

One of the features that makes Blue Wish Resurrection friendly to beginners is "auto guard". Activated by default, auto guard is a resource that prevents you from dying by sacrificing one of your bombs while wiping all enemy bullets. This means that if you have 5 bombs in stock you can get hit 5 times before biting the dust in the final blow. Even though using auto guard is perfectly okay and certainly helps players achieve the much desired 1-credit clear, it also brings a bit of laziness to the table because it inevitably reduces the importance of bombing. On the other hand, "guarding" is detrimental to scoring because each extra life upon game completion is worth 2 million points instead of the 2,5 million you get with auto guard set to OFF. Regardless of having it on or off there's a 1/3 penalty loss in cube count whenever you get hit, which of course leads us to the conclusion that bombing is always better than guarding when playing for score.

As one can see, the risk/reward ratio is finely interwoven into the mechanics of the game. Speaking of Original, my chosen game mode, the jump in difficulty from one level to the next represents one of the most clear difficulty slopes I've ever seen in the genre, in that the leaps in bullet speed/density and enemy aggression require immediate stepping up from the player. There is no rank, no such thing as point blank safe zones exist and slowdown is nowhere to be seen (intentional or not, in Windows 10 at least). Halfway into the game you are already required to perform at least some minor crowd control in order to survive, let alone study realiable ways to come out alive from the most intricate boss/mid-boss patterns without bombing because, you know, at the end of the level you get several bonuses for number of lives, bombs and cube count, among others. Note: cube count starts decreasing during every boss battle, so a compromise must be made between speed-killing and timing the destruction of boss parts in order to finish the level with the maximum amount of cubes possible.

Besides the regular score-based extends granted with 4 and 10 million there's a hidden 1UP to be taken in stage 3, which is the only essential secret players need to know: uncover all 10 cube fountains within the level and fire in the middle of the screen right before the boss with regular shot. Other minor secrets consist of a different ship color (press bomb instead of shot at the selection screen), new ships unlocked by beating/1CCing the game in Heaven and Original modes and a true last boss only unlocked by 1CCing Hell mode starting at least in stage 5. For those who care, extra ships and the TLB can be accessed faster by means of a couple of cheat files provided by the developer (check them here). All other pertaining data regarding the game can be found here, whereas data on all games by X.X Game Room can be found here. It's all in Japanese, but Google Translate is our friend.

Make no mistake, this is the best free and fun bullet hell shooter you're bound to get. Even with the brutal action of its final stretch, Blue Wish Resurrection definitely has that one-more-go factor that comes with all great shooters, catered to all skill levels thanks to the different modes available. In the beginning I used to switch the songs in the game to my favorite rock tunes (just replace them in the correct folder), but ultimately decided to go with the original soundtrack, an energetic collection of tunes that perfectly fit the action. The ability to save/watch replays is very welcome (saving is disabled if you pause though), as well as a practice mode for all stages and bosses you're able to reach in a normal credit. Players can also change the color of enemy bullets and alter the volume of music and sound effects in the options.

My high scores for Original mode playing with Blue Wish are pictured below, with the best one achieved with auto guard ON. To my sadness only the analog pad of my Xbox 360 controller worked, but alas! At one point I had auto guard OFF for the sake of forcing myself to properly learn the game, then switched it back on so that I could have the leeway of not dying for common mistakes, a more advantageous condition for players of my skill level. 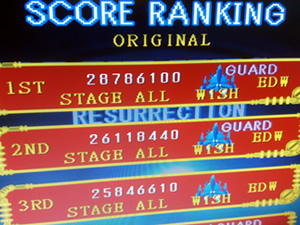