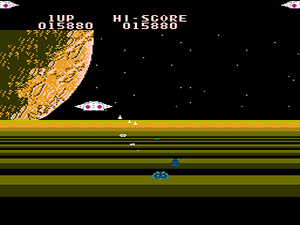 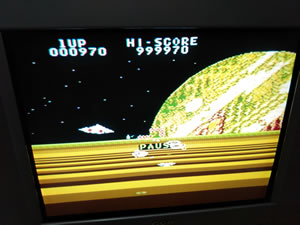 In 1990 a new anime franchise started airing in Japan, following the end of the first generation of Transformers. Known as the Brave/Yūsha series, it focused on giant mechas working with humans as peacekeeping forces. Firebird (also known as Taiyō no Yūsha Firebird) is based on the second season of the Brave series, which came out in 1991. Why the developers chose to make the game for such an old platform like the Famicom was in 1992 is a little mystery, since one would naturally expect them to target the most powerful systems at the time. But then again, one could say the Super Famicom was still in its infancy while Irem had absolutely no allegiance with Sega.
Firebird is considered to be a mistranslation that actually makes a lot more sense than the original term Fighbird, so I'll keep using it for the time being. The full name of the game translates to The Brave Fighter of Sun Fighbird. For all purposes it's just another licensed product that leaves a lot to be desired, so don't get your hopes up when you see the powerful name of Irem in the game box or at the start screen. The game is slow, boring and for most of its duration it's quite frankly just another very effectively designed snoozefest.
There are lots of Japanese dialogue in Firebird, as well as many characters interacting in between levels. That was the whole idea of fan service in a licensed game, of course. You even have the chance to choose one out of both main characters of the show: Kenta (the yonger lad to the left) and Katori (the older guy to the right). There are no functional differences between them though, so it really doesn't matter who you go with.
First stage of Taiyō no Yūsha Fighbird/Firebird
(courtesy of YouTube user AAAA HERO)
The stage structure is very odd here. With the exception of the final level, each stage is divided in three parts with specific gameplay rules. In the first section you must fulfill a certain task while choosing any of the five available vehicles (or "barons") at the press of button A. Firing is accomplished with button B and differs for every vehicle, which in turn is powered up separately by picking up the P icons that appear from time to time. Other items you'll come across are the heart (for health refills), an S (for speed-up) and a clock that serves to extend time. If you fail to complete the mission in the alotted time frame you go directly into GAME OVER regardless of how many lives you have left.
In stage 1 the objective is to destroy seven green bombs, in stage 2 you're supposed to collect seven red canisters and in stage 3 you must arm seven bombs by pressing SELECT in specific orange platforms. Note that a small counter in the lower right corner of the screen shows how many items are missing in your objective list. In these sections Firebird behaves a little like Silkworm or SWIV, in that ground vehicles will not allow you to move freely around the screen. Since everything's so dull and easy, you might as well just pick the last vehicle, the Sky baron, and fly at will to complete your missions.
During the second sections of a level you're in control of a single jet that's powered up by picking up items numbered from 1 to 4, which activate and upgrade new weapons that must (again) be chosen by pressing button A. This is where boredom reaches its peak with endless empty backgrounds and few enemies crossing the screen. If you don't know what to do you might be stuck there for a long time, as I did when I first played the game. There's no timer anymore: the catch is that in order to move on you need to press SELECT as soon as the name of the game pops up in the corner.
Moving on the the final section of the level, you'll be in control of the large Firebird mecha in a quest to defeat the stage boss. It uses the same arsenal of the second section, including the need to switch weapons with button A. Note that the first weapon comes with an extremely powerful charge shot that's devastating against larger enemies. All other weapons require some sort of artificial turbofire in the controller if you don't fancy manually tapping your way towards victory. 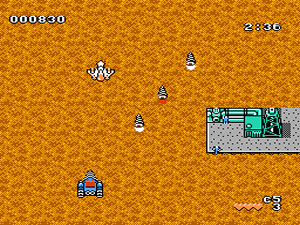 The Drill baron in glorious action
In terms of difficulty, Firebird is nothing short of a joke. The challenge never picks up, and with the exception of bosses you'll never feel there's any danger whatsoever. You can take lots of hits because of the lifebar and the incoming refill hearts. Besides, it's also possible to get lots of 1UP items in all types of sections throughout the levels.
The only redeeming quality of this game, for Famicom standards at least, is the music. The soundtrack has decent moments that are sadly used over long stretches marked by tedious action and tepid design. Unless you're keen on having a taste of uninteresting gaming history, I doubt there will be any thrills even for the most diehard fans of the anime.
Firebird keeps no track of scores and even hides the score display when you pause. The result below was obtained by filming the fight against the last boss with a cell phone and then freezing the footage on his death afterwards. Since you can play second sections of levels indefinitely (without pressing SELECT when needed), there's no point at all in trying to play the game for score. 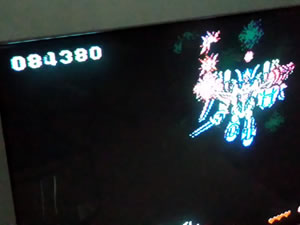