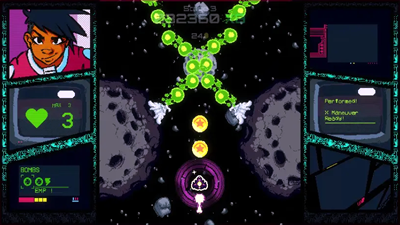 Sophie Jefferson about to dash for great justice
Another very important thing you'll be picking up along the way are coins. For every in-stage enemy killed you get a certain number of them. They're used as currency to get additional items from the shopkeeper at the end of stages 2 and 4. Note that you can shoot and damage him twice for a few free coins, but if you continue to do that he'll get angry and fight you (thus allowing secret character Swagthulhu to be unlocked). Contrary to what you might expect coins have no influence on scoring, which is based on killing successive enemies for a multiplier of up to ×4 or ×8 when overloading (by picking the lightning bolt or activating its special bomb). Multiplier depletion is indicated by the thin light bar at the top of the screen, but transitions and mad events can freeze it temporarily.
With so much going on it can be tough to get a sense of what's really happening or what you should do to avoid horrible deaths due to a combination of lousy power-ups and crazy hazards. Eventually I learned to cope even with those annoying crawler areas. No matter how powered up the ship is, you'll have to go through them with that puny fire shot (tip: tap the button for a little more power). On the other hand, the Mario crawler area is quite rich in shield items, which is good even if your shield stock is maxed out because for every 5 extra shields taken you earn a new shield slot (same effect of the ♡, just take a look at the bars that appear below the shield stock indicator). Another aspect that doesn't quite gel with the rest of the game is the tank module, which is awesome for sheer firepower but is a pain to deal with. It can appear normally during the start of the credit, otherwise whenever you complete a level without getting hit a free tank module will be awarded before the next stage starts.
Now for the weird stage arrangement. Even though it takes 5 stages to beat the game, players can extend its duration simply by avoiding to enter the final boss chamber at the end of the fifth stage. Don't dash into it and it will eventually go away, allowing you to continue playing. Subsequent levels are harder but they obviously make the scoring system moot since you can theoretically go on forever. Regardless of the number of stages played, in order to see the real ending to I had to beat Project Starship X at least four times, unlocking all available levels in the process and seeing most of the bosses except one. Upon initially booting the game I had "Tutorial" at the top of the start screen. I beat it once and it changed to "Shadow's Lies". I beat it again and it changed to "Geometries of Horror".
Completing the game one more time in the abovementioned phase not only changed it to "The End?", but also unlocked Hardcore and Ultra-hardcore modes (a red skull at the center of the screen when you start the credit, and a red skull with horns that comes right after you pick the first skull). The real ending was only shown when I beat "The End?", which shifted the game phase to "Game Over???" and unlocked Boss Rush mode and Chaos mode (a steaming skull to the left of the screen and a dice to the right when you start the credit). Beating "The End?" also enabled the appearance of doom letters, special alphabet bosses that show up randomly in the place of mad events and must be defeated for you to have access to true last boss Grandma-Thulhu. Since there are six of these letters and you only get one per level (when lucky), you need to play at least 6 stages in order to do it. If successful in killing the TLB, Doom mode will be unlocked (a red D to the right of the screen when you start the credit) and the game phase will finally settle in "Journey's End". The purpose of Doom mode is just to activate/deactivate the appearance of the doom letters. Chaos mode shuffles everything in the game (from stages to enemies and bosses), whereas Hardcore mode is a bit harder than normal and allows score multipliers of up to ×8 with ×16 when overloading. As for Ultra-Hardcore mode, on top of being much harder it also adds new gameplay elements that include freezing the ship in place if you don't adhere to certain rules (a heart attack).
As we can see, it's up to the player how far he/she wants to push into the depths of Project Starship X. The game speaks to very specific sensibilitites, but as far as roguelite shmups go it's definitely one of the best options out there. Is it fun? I would say it eventually becomes fun if you don't give up on it. The final boss is no pushover but the game as a whole isn't terribly hard, it's just very unfair at least until you start figuring out how to deal with all possible gameplay variables. Since the game allows co-op play, you can also do that with a friend.
I got the completion screen below by beating the regular game in the "The End?" phase with Garret Zeppola and no looping at all (only 5 stages played). Afterwards I did try to pursue the doom letters a few times but eventually gave up. For now I'll leave this final pursuit for another opportunity. 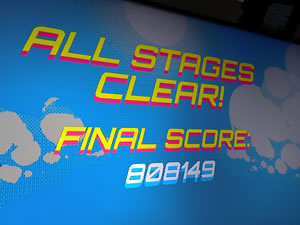 The remarkable success of Gradius in the 80s was a magical moment for Konami and shmup fans. Ported to a multitude of systems back in the day, the game also paved the way for a few spin-offs, of which the most famous for a while was Life Force, which in turn is the westernized name of the original Japanese Salamander. If you’re often confused by both names, suffice it to say that confusion is a common companion for this shmup duo, a fact that was duly cascaded from the arcade realm down to the Famicom/NES.
Despite the dubious nature of the ports, the success that Life Force had in the NES heyday is undeniable. Chances are 8 out of 10 people who lived through that era will choose it as a favorite. The dark and moody environment combined with a great soundtrack and sensible shooting action made for a winning combination that went beyond the mere mirroring of the arcade game. After all, it mixes some of the original material with completely new backgrounds and enemies. It’s not as visually cohesive, but 8-bit shooting fun never needed much consistency anyway.
At any rate, it's been a while since I played the Famicom version of Salamander (more than 11 years, time flies indeed). Secondary port Life Force served to rekindle my interest and overall knowledge with this confusing but otherwise fascinating franchise.
Vic Viper darts into the Bionic Germ area
(courtesy of YouTube user VideoGamePhenom)
The NES port of Life Force follows the basic structure of the latest arcade iteration, thus keeping the classic weapon array introduced in Gradius. This means the player needs to collect power-up capsules and activate them with button A as the slots in the weapon array are shifted to the right. Upgrades come in the following order: speed-up, missiles, ripple, laser, option and force field. Naturally, button B is used to shoot and can certainly use an additional turbo controller since no autofire is included. Just note that whenever laser is activated it’s better to turn off the turbo function.
Stage scrolling alternates between horizontal and vertical, but the idea of exploring the insides of a living organism isn't well implemented because there's absolutely no sprite reworking from what was first presented in Salamander (a convoluted story detailed in the instruction manual tries to fill this gap). The 2nd level mixes up stage 4 from the arcade with the Tetran boss, while the 3rd level seems beefed up in comparison even though you're still flying through fire arches, as opposed to the blue bursts of arcade Life Force. A new organic 4th level includes red blood cells and nerves expanding from diseased organs, culminating in a fight against a new skull boss. And then there's the weird departure of the Egyptian themed 5th level, which makes no sense at all given the overall design theme.
Even though the gameplay in Life Force and Salamander is identical, a few differences exist between both ports. The most notable one is that in Life Force you can only activate a total of two options, whereas in Salamander the player can have up to three. The HUD display is another clear indicator of which version you’re playing, but just like the cosmetic graphical and aural differences that give Salamander a slight edge in any comparision they have absolutely no relevance in the gameplay. Finally, the use of a few continues can lead to three different endings in Salamander, but there's just a single ending with no credits in Life Force. 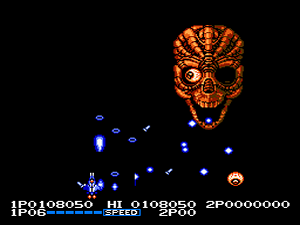 New boss of the 4th stage
Surely this port doesn't hold a candle regarding difficulty when compared with the arcade, but that doesn't mean it's devoid of challenge. The third stage in particular is a destroyer of credits if you die and panic amidst fireballs and flaming dragons. Surviving can be made easier by a few nice resources though. Here it's possible to recover your options after dying, for example, however if you're standing too close to the rear border you won't be able to get them back. Score extends are granted with 10.000 points and for every 30.000 points after that, but you can also achieve extra lives by collecting blinking power-up capsules. As usual, the gray capsule acts as a screen-clearing smart bomb.
When talking about scoring there isn't much to be said about Life Force on the NES. Capsules give no points whatsoever, so it's just a matter of destroying everything and trying to milk enemies coming out of hatches. Unfortunately, just like in Salamander the game is broken because you can exploit it easily for a counterstop during the rematch against the three big cores halfway the 5th stage in the second loop. Just avoid destroying them and focus on the hatches that are spawned ad infinitum at ground level.
I quit the credit exactly at the spot mentioned above (stage 2-5) with the score shown below. Despite this oversight with the scoring system the game is definitely fun, with a second loop that adds a few more bullets, enemies and twists such as Tetran suddenly reverting the rotation of its arms. 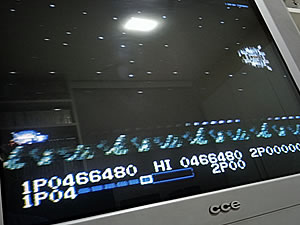 Posted by Edward at 1:23 PM No comments: