Oh gosh, where to start with Xenon 2 Megablast? The sanest choice would be to not even touch it, this game is one of the reasons why sometimes I wonder if my love for shmups makes me go too far into the realm of mediocrity.

Xenon 2 is a disaster, by and large the worst shooter in the Mega Drive library. Yet there are people who will defend it with rugged compassion due to its heritage as an Amiga game and receptacle of music from Bomb the Bass. Whereas this has absolutely nothing to do with gameplay, any other reasonable sources of praise Xenon 2 might have had back in the day are unknown to me. It could be argued that the genre was still in its infancy when the original game came out in 1989 (one year after the first Xenon) and the game pretty much represented a newborn style that spoke to the sensibility of lots of people. I just find it downright awful, and I guess nostalgia's to blame for keeping this turd afloat within a few cult gaming circles for all these years.

Of course this text is aimed at the European exclusive Mega Drive port, not the original version. The Amiga game doesn't seem to have the atrocious jerkiness that plagues the Mega Drive version, which appears to run in permanent slowdown. That alone should make the original game a less inept effort, because Xenon 2 for the Mega Drive is so sluggish that during the first stages you have to virtually pray for your ridiculous weapon to take out the smaller enemies. Most of the time they'll just dance and weave in between the shots before fleeing. The fact that the majority of the enemies fly around in completely erratic patterns also adds to an ominous feeling of general schizophrenia. So here's tip number 1: memorizing these erratic patterns actually means 50% of the success in Xenon 2. 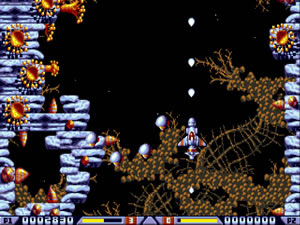 Xenon 2 is a unique vertical shooter in that it allows the player to reverse scrolling direction briefly whenever he/she feels like doing it. There's a limit to how far you can go and how long you can do it, with the exception of boss fights, a few unique sections and dead ends that allow you to reverse scrolling until you can take the opposite side of the split. Thankfully dead ends aren't everywhere. Splitting pathways are a sign that the game has lots of walls that the megablaster ship must navigate through. There's no harm in touching them, damage is only taken by getting shot at and by colliding with enemies. When the health bar is gone you get sent back to one of the six checkpoints within the stage.

With a general motif that involves organic environments and several types of biocreatures, the Mega Drive version is in fact very close to the Amiga original from a graphical standpoint. Flames, plants and snakes protrude from walls while other enemies arrive in several formations. These are mostly worm, fish or insect-like flocks that move around and shoot back every once in a while. Every stage is divided in two parts with a boss waiting at the end of each one, except for the starting half of the first level. Bosses are huge and often need to be destroyed piece by piece - weak points show damage when hit and certain spots can only be destroyed one after the other. The boss gallery includes a nautilus shellfish, a spider, a crab, a chameleon, a behemoth with snake heads and other indescribable monsters.

In order to increase the chances of survival it's necessary to power up the ship. Capsules float into the screen and release items once destroyed - the most important ones, a pair of speed-ups (S), appear very early in the game. Real power-ups taken from capsules are rare, most of them need to be bought from Colin the alien, the owner of the shop you go into when a section is finished. Currency consists of the bubble cash left by enemies, so take as many of them as you can (small bubbles are worth $50 and large bubbles are worth $100, bosses release lots of bubbles upon death). Once inside the shop you're first given the chance to sell any item you have already installed on the ship. Afterwards you can buy upgrades and enhancements, and it's perfectly possible to build a powerhouse on multiple weapon add-ons. Beware though, some of them will exclude others without warning: rear shot can't be used at the same time as the side shot. Just like other annoying traits regarding power-ups this isn't explained anywhere in the game or the manual, so prepare for some stupid and unnecessary trial and error.

Essential items to buy are autofire and small/large hearts (partial/full health recovery). Autofire comes in two steps (you need to buy it twice to get the faster rate of fire) and is the only upgrade you lose when dying. Don't worry about advices (A), they're useless. Another useless item is the super nashwan power, which activates a superpowered ship for 10 seconds only. Other upgrades include cannons, lasers, mines, electroballs and the so-called dive, a 10 second invincibility window activated with the B button. Button A is used to fire, and both buttons control the process of selling/buying stuff at the shop.

<Hard, fast coin-op quality destructive action with a hot soundtrack to match> This is the message that tries to lure the player into the game, printed on the back of the box. The only part of it that's true is the "hard" statement, for reasons exclusively related to an unfriendly power-up scheme, painfully slow bullets/gameplay and bad collision detection. It's not rare to get stuck in the scenery and be hopelessly bombarded by an oncoming enemy wave. Until you've memorized things enemies will frequently swarm from behind the ship and drain your health in kamikaze fashion. Visibility is guilty on this since it's impaired by the weird scrolling and by a few odd choices for the color palette. As for the soundtrack, the only tune in it isn't bad - it's actually based on a Bomb the Bass song called Megablast, hence the game's subtitle. It's hard to endure the same song playing over and over throughout the whole game, but fortunately there's an option to turn it off and hear the disappointing sound effects only.

The brief moments that felt good while playing this torture were when the zapper item (Z) appeared. It works as an instantaneous smart bomb, obliterating everything on screen with a neat effect provoked by a big flash. I came up with a quick strategy to minimize the grinding: get two autofires as fast as possible, sell rear shot after the first boss, buy side shot and power-up, spend the rest of the cash on lasers and the necessary refilling hearts. I take all items from destroyed capsules except for the rear shots that appear at the beginning of stages 3 and 4 (keep on one side and wait for them to go away).

Another sign of the crappiness of the Mega Drive version is that it excludes the original fifth stage completely. Well, at least the overall pain is shortened so you get to see the wonderful ending and the special message from Colin the alien a bit earlier. If you're the kind of guy who cares about endings be prepared for a surprise. Suffice it to say it's in line with the quality standard of the rest of the game... I got to see it twice as I reached stage 3-1 on NORMAL, and this new high score is 27% higher than my previous one. Xenon 2 Megablast has no extends, allows up to three continues and loops with stronger enemies. The game is region-locked to Europe and requires an adapter to be played on consoles from other regions. 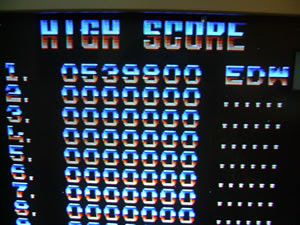 Note: this text was cross-posted with minor changes on Sega-16.
Posted by Edward at 11:29 PM