In the Hunt (Playstation)

Ever since I played Seaquest in my Atari 2600 clone way back in the past (I was there, I lived the good old days) submarines were always in a special realm of fantasy within shooting games. There weren't so many of its kind, maybe that's why In the Hunt stands out as the most recognizable one. It's a sprite-based behemoth that looks a lot like a Neo Geo game, partly due to the graphical similarity with famous run'n'gun series Metal Slug, whose first chapter would be developed a few years later by the same team who took care of this game.

In the Hunt (Kaitei Daisensou in Japanese) is a special shmup because it has a considerably slower pace than usual. Pacing is actually my only gripe with the game, I wish it ran at least a little faster (I also had the impression that the Playstation port seems to run just a tiny bit slower than the MAME rom). In the Hunt also ditches automatic scrolling: the screen will only advance if the player wants, allowing everybody to establish their own pace provided the timer doesn’t reach zero. When this happens all lives are lost one after the other, there’s no way to bypass that. The clock runs more slowly than regular time and gets refilled at certain spots in the stage, but that red timeout is dreadful… Be careful not to run out of time when procrastinating, milking or waiting for the best window to navigate through tougher areas such as the fields of spinning missiles.

As the commander of the submarine you’re given permission to unleash justice across six stages of underwater hazards. The mood is initially set by a couple of blue whales passing by as the submarine gets propelled into action, armed with torpedoes and bombs. Torpedoes are fired in a straight line, bombs drop explosive rounds while firing missiles upwards. These missiles change according to the submersion level of the submarine: if you’re underwater they just travel upwards and fulfill their purpose at surface level; if you’re at surface level they are projected into the air with different results. 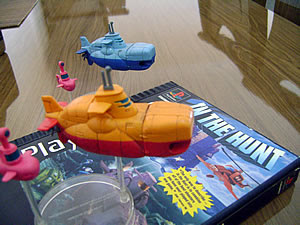 In order to change the weapon types you need to destroy carriers and pick up items. Torpedoes can be red (naked projectiles - default), blue (shockwave) or green (cluster explosions). Bombs can be the default (gone once any of the others is taken), type A (floating mines/machine gun) or type M (missiles/homing missiles). There’s still one item left, the star icon. It might be inside floating blue shells or appear when certain enemies are destroyed, varying in size. The smaller ones are worth 1 star, larger ones are worth 5 stars. The player earns an extra life when 100 stars are collected. Unfortunately the stars serve no other purpose (the number that appears below the stars is the number of continues left). In the arcade mode there are no other resources, but the Playstation arrange version adds a shield to the item roster (yellow item). This arrange version is pretty much the same game, only made easier by the shield itself.

The bonus at the end of the level seems to relate to the number of enemy subs destroyed and the boss kill. Losing lives can lead to tight situations depending on where you die. Once this happens it can be a good strategy to just move forward against the enemies to take advantage of the generous invincibility window.

When a game has such a multitude of explosions and different environments it’s easy to get involved in the action and enjoy its natural flow. That’s the reason why In the Hunt is bearable despite its sluggishness. Main stage motifs appear as the South Pole, infiltration into a harbor channel, ascension through ruins with a huge stone boss on the submarine’s tail, a sunken town, caves with melted lava and a final fortress where the ultimate enemy torpedo awaits. The order of the stages is different from the arcade game, but I kinda like the fact that you get "Seabed Ruins" as third stage. Enemies range from the basic stationary mines to freezing lasers, walking/swimming robots, enemy subs, intelligent turrets, tanks, trains, planes, floating bombers, helicopters and all sorts of aquatic machinery. They all provide for an intense campaign considering the game's slow pacing. Enemy bullets are also on the slow side most of the time, and all bosses have fixed attack patterns that facilitate the progress credit after credit. My nemesis is the pair of turtle-like creatures at the end of the sunken city. As for the stone monster, to destroy it you need to bomb the overhead walls, dropping them over his head.

Destroy their system before it's too late!
(courtesy of YouTube user Mushaaleste)

All weapons have their proper use, but my favorite combination is the cluster torpedo (green) and the type A bomb/missile. Dealing with icons is an exercise in patience, since they take a long time to cycle colors/letters and force you to just sit there waiting. Once maxed out in power (3 items), every extra item adds one star to the star counter.

The soundtrack for In the Hunt is engulfed all the time by the plethora of sound effects for bullets and explosions. It’s one of those games where you need to stop shooting to listen to it, except for boss fights. It’s not that great a loss because the music isn’t memorable by any stretch of the imagination. Playstation owners are better off using the improved arranged soundtrack - it can be heard in both game modes, Playstation and Arcade. Maybe to preserve the original arcade resolution, the vertical span of the screen in the Playstation port must/can be adjusted with L1/R1. It’s possible to hide the HUD entirely, but in some cases this isn’t beneficial. If you do this during the battle against the stone boss, for instance, you won’t be able to see his arms protrude before attacking from below.

Despite the minor annoyances the Playstation package fulfills its purpose with co-op action, high score saving and optional autofire. My approach to the game was pretty straightforward, aiming for a quick clear. There are a few hidden ways to amass more points from key areas (e.g. bosses), but I’ll leave that to a future opportunity with the Saturn port. For now I’m satisfied with the result below, achieved on NORMAL (North American longbox release). Note: the starting number of lives is 4, so in order to match the arcade specs I had to go to the Options screen and set it to 3. 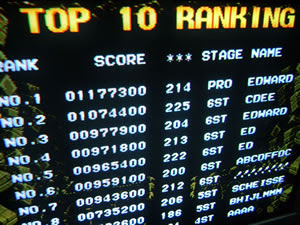