It just occurred to me that Sol-Feace might have been the only shmup to be included in a bundle release with a console. What an honor! This happened only in US and Europe, in Japan it was merely a launch title aimed at showcasing the technical prowess of the recently released add-on for the Mega Drive. This huge responsibility is partially the reason why a few people disregard the game as a valid effort, since it didn’t really step up Mega Drive specs to the revolutionary standards promised by Sega. Sol-Deace, the cartridge version released later only in the US, is there to prove it. Originally appearing for the Sharp X68000 computer, the game is a classic horizontal space shooter: scroll right, fight your way across the stage, beat the boss, repeat for six more levels to reach the end. Probably due to the genre saturation that took over the console market at the time and the negative hype from initial reviews, this simple yet elegantly executed shmup was taken for granted by lots of people.

One of the clear advantages that came with the CD format was the available space for programming, and Sol-Feace uses this extra room exclusively for a lengthy intro with crisp narration and cut scenes. I played the Japanese game, so the storytelling was a mystery to me because I understand bollocks of Japanese. I was content just to know that my spaceship is piloted by a guy and a girl (Engrish is present in brief messages in-between stages, but do not allude to the main story). I guess I never said that, but the spaceship’s main hull reminds me of a horse’s head. Horse of the galaxy, riding the universe to destroy an evil sentient computer! After departing from what seems to be an orbital landing field, the ship travels through an asteroid-filled area, an enemy base and the surface of an artificial sun, facing a huge battleship afterwards. A swift scramble into the enemy’s core facilities in Pluto precedes a treacherous mission on Jupiter's third moon, and then comes the final showdown for the fate of human kind. 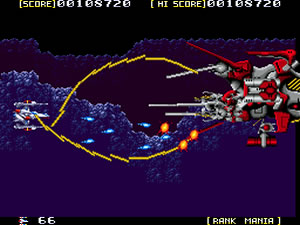 Behold the most hated foe in Sol-Feace

Sol-Feace’s gimmick resides in the way power-ups are handled. All three weapons (vulcan, laser and grenade/missile) can be combined at the player’s will when an item is uncovered. Whenever the ship is spawned, either when the game starts or when you lose a life, the very first power-up generates the upper and lower cannons and provides a basic vulcan shot. After that touching a power-up icon is what determines where it will be activated: descending upon the item applies its power to the lower cannon, going up against it does the same to the upper cannon and approaching a power-up horizontally executes the effect on the main ship. Once the upper and lower cannons are activated, refrain from shooting, move around to adjust the cannon’s openings and fire to lock them in place. It’s possible to have firing angles close to 45º.

The soundtrack to Sol-Feace is awesome, but these days I must admit that I find the cartridge version renditions in Sol-Deace to be more charming. The Japanese version of Sol-Feace has a richer set of sound effects than the discs from other regions, but overall the sound design in all variations is pretty good. For example, besides changing the appearance of the cannons each weapon type has its own characteristic sound. My friends and I always thought of the vulcan as the "bubble gum" shot. Missiles are the most powerful weapon and make a neat sinking sound when they hit something. Laser is less powerful but is capable of piercing multiple enemies at once.

Some other aspects of the gameplay aren’t as explicit as the ones I mentioned above. One of them is the ship’s exhaust animation, which appears whenever you’re moving forward and is capable of damaging enemies. It’s an invaluable resource during the fifth stage, by the way my favorite one. Wait till the enemy ships approach from behind and dart forward as they come close, just beware of the blocking lasers inside the tunnels - they activate as soon as your ship crosses their detection range. If you want to alter ship speed you must do it in the configuration screen at the start menu. Default is Middle, with Slow and Fast as alternatives. For a game that uses only one button, I can't help but wonder why Wolf Team didn’t include selectable speeds during the actual gameplay.

I think the challenge in this game suits the 16-bit format quite well. Practice and memorization become more important by the 4th stage, but even then Sol-Feace is always capable of taking the player by surprise due to random elements (the whole 5th stage and the 6th boss are to blame for this). Every credit is started with five lives, which is far above the average for any 1-hit death shmup. I couldn’t grasp the exact interval for extends due to the way scoring is implemented, but I noticed the first one comes with 30.000 points, with further extends reachable as the game unfolds. There seem to be shadier aspects in the scoring system, as indicated by when the 3rd boss gave me half of the expected 50.000 points when defeated. I have absolutely no idea why it happened, and since I was trying to beat my old high score that made quite a difference in the long run. Be aware that bosses time out, so don't abuse milking when playing for score.

Even though Sol-Feace doesn't get bold graphically and doesn’t take the genre any further (as expected from a launch title in a new console), it provides good fun and doesn’t sound derivative at all. The harder difficulty is dubbed "Mania" (or "Advanced" in Western versions) and practically consists of a new game, with more enemies and more bullets coming from every corner. What's important is that in whatever mode you choose the game oozes with nice atmosphere, and it’s hard to pick on any technical aspect besides the lack of instantly selectable speed. A little slowdown and flicker is to be expected, loading times are short and the available continues are surely welcome during the learning process.

My high score was improved roughly 5% over the previous one I had (Normal difficulty, Middle speed). 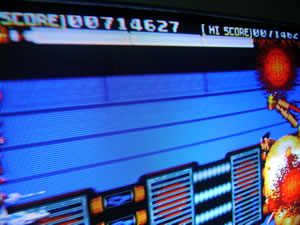