In a planet devastated by war against an alien race, two unknown soldiers battle the enemy to restore Earth to its previous glory, before it started being called a “dust world”. Fitted with flying gears, they tread the wastelands armed with rifle cannons and advanced weapon satellites, with the ultimate goal of dethroning and defeating the evil emperor Bios. As we can see, the story perfectly matches the Forgotten Worlds title. Originally created by Capcom for the arcades, on the Mega Drive the game appeared by courtesy of Sega themselves, with relatively faithful graphics and altered controls designed around the stock 3-button controller.

For those who are new to shmups or to 16-bit gaming in general, Forgotten Worlds for the Mega Drive comes with a prank that has unsurprisingly frustrated many people (at least for a brief while) and held a few unwary ones from actually playing the game. Case in question: fire up the cartridge on a console that has a 6-button controller attached and experience instant GAME OVER after starting a credit. Holy shit, talk about a hard game! Jokes aside, this is a rare case of a 6-button controller incompatibility with an “old” title. To bypass that just press the Mode button on the controller as the console is turned on and voilá! I know it seems stupid to mention this, but I’ve seen quite a few people go really mad thinking the game was damaged somehow.

As a hint of how easier this port is when compared to the arcade game, the player starts with both the basic gun and the V-cannon satellite (there was no starting satellite originally). The satellite is an option that fires the currently chosen weapon and shields the player against most enemy bullets. Multidirectional shooting is accomplished by firing with button B and rotating the aim with buttons A (clockwise) and C (counterclockwise). Shooting direction follows what’s determined by A and C, but as long as you’re pressing B the position of the satellite is locked in place. Therefore, in order to rotate the satellite and park it in a desired position you need to stop shooting. Even though controls seem complicated, it takes just a little practice to get used to them.

The options screen allows you to tweak the speed of the satellite in three steps (slow/normal/fast). There's also a special “auto fire” switch that doesn’t correspond to the regular idea that we have of autofire because the game naturally has it. This “auto fire” just makes the characters shoot non-stop as if the B button was permanently pressed, but if you decide to use it do it as soon as you start to play the game since it kinda messes with the dynamics between the B button and the rotating inputs. I prefer to play without it because there are moments where shooting isn’t really a good idea, such as the parts with the oil pipes in the first stage or the gates that determine progression in the Egyptian levels (hitting the wrong gate triggers a different path than the intended one).

Enemy galleries of shooters starring flying people tend to be filled with other flying people. In the case of Forgotten Worlds these include strange lizard men, indians, ninjas, severed heads and the iconic final boss. Drones, laser turrets, giant snakes, crawling heads and a wealthy amount of weird bosses complete the package. Upgrading the arsenal and increasing the chances of success against them is possible by collecting the blue orbs left behind by some enemies or found in hidden areas – called Zenny, they’re the currency to be used inside the shops that appear once or twice throughout each stage. Beautiful Sylphie (or Mirabella, according to the manual) offers the player a wide assortment of upgrades and enhancements, from which the most important are the flying stone (speed-up, buy it only once), life pack, health treatment/refill, potion of resurrection and booster. Satellite upgrades should be chosen carefully, since you can carry only one and some of them are clearly more effective than others while being cheaper. Buying armor (protection against 3 hits) is important only until you discover hidden armors than can be uncovered in key places (by the way, watch out for more strange items). Abusing health treatment can lead to tricky situations in the end because for each purchase it gets increasingly more expensive. 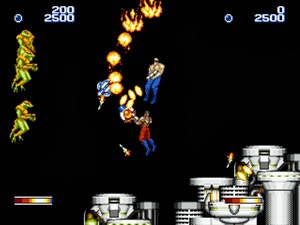 Unknown soldiers are on the move

With the exception of two absent stages, all elements of the original game made it into this version of Forgotten Worlds, from the desolate wastelands of the first stages to the upward scrolling section leading towards the false god, two of the Egyptian levels, the cloud stage and the tower with the final boss (the cave with the twin bosses was left out). The three-way spread gun of player 2 was removed here, so both characters share the same straight gun type. Other than that the graphical and aural adaptation is decent but could’ve used a little more color, losing to the PC Engine CD port in this regard. At least the Mega Drive preserved the pictures showing the nameless ones blabbering in between stages. The difficulty is considerably toned down since the game has less enemies and allows blocking of many types of attacks by the soldier’s firepower. On the technical side, a crowded screen can lead to brief bouts of slowdown, but that’s it. I believe this might get a little worse when the game is played in co-op, but I didn't have the chance to check that.

Some of the items from the shop were downscaled or excluded, but the sheer amount of them offers lots of opportunities for experimenting. My favorite weapon for most of the game is still the napalm bomb (I used it a lot when I beat the port for the Playstation 2). On the Mega Drive the napalm bomb behaves a little differently, being fired in a straight line instead of a downward arch. In the end the homing laser still kicks lots of ass, and is even capable of blocking the attacks from emperor Bios. The "dress" item in the last shop is unique to this port, and its sole purpose is to grant a bonus of one million points once the game is completed.

Unless you have a potion of resurrection, once the health bar is gone it's GAME OVER, no continues allowed. While that's good to add replay value to a fairly manageable challenge, it's just unfortunate that Sega didn't include any type of high score display, not even when you beat the game. Since it's shown for approximately one second only, you have to be very fast to see your final score when the 1CC comes. Was I fast enough in the picture below? It's a crappy photo that should read 1.627.300, a result of playing the game on Normal, player 1 side, auto fire OFF and satellite speed set to Normal. 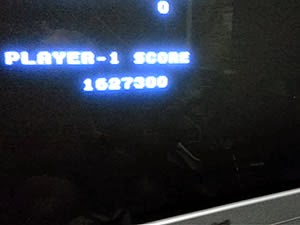