Evil never really dies, at least in the world of video games. Even though the virus menace had been defeated at the end of Söldner-X - Himmelsstürmer, it took only 20 years for a new alien race to once again threaten intergalactic peace. The new battle takes place in the sequel Söldner-X 2 - Final Prototype, which desperately tries to address some of the criticisms received by the first game in order to make it more forgiving and straightforward. Whether it succeeds or not depends on what type of player you are, and on my part I can say I was let down by most of the changes. Final Prototype isn’t a bad shooter in the regular sense, but having a handful of unnecessary dressings that get in the way of pure gameplay makes me rather uncomfortable.

At first eastasiasoft released the game with 7 stages only, but a few months later the company delivered an extra package called The Last Chapter that added three extra levels to the original seven. Therefore, the complete game spans 10 stages in a very long campaign that manages to top the previous game in length. That wouldn’t be such a bad thing if it weren’t for the fact that the extra stages come out as a mere afterthought, which only serve to increase the boredom potential of an already very long game. For what it’s worth Himmelsstürmer at least tries to evoke the structure of an arcade game, whereas Final Prototype chooses to break the mold in order to emphasize trophy hunting.

Just like in the original chapter, on the outside it’s hard not to get wowed by the sleek visuals, the flashy explosions and the decent soundtrack that adorns everything about Söldner-X 2. There's also constant radio chatter all over the place and a plethora of sound effects, which is nice. On the other hand, gameplay is easier and considerably different, with simplified weapons management and a simple rank/chaining system. Gone are the overheating mechanics and the harmful items, for example. Let’s start with the basic gameplay and then proceed to the awkward in-game requirements for a single credit run.

Initially there are two ships to choose from, the Thor and the Mexxus II. The third ship is the one from the first Söldner-X, unlocked by fulfilling a special mission out of the main game. All ships carry two permanent weapons and an extra slot for a third, by-item selectable weapon. Thor’s main attacks consist of a straight impact shot that scatters off when hitting something and a soft but powerful pulse shot. Mexxus II comes with a conical spread shot and a continuous magma stream. Item-based weapons that occupy the third slot initially consist of a green wave shot or a weak three-way homing spread laser, with further weapon types being unlocked for each ship as you continuously play the game. 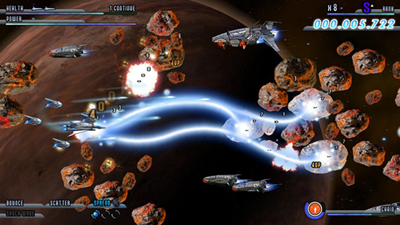 Behold the power of the spread laser

For controller settings you need to have five inputs: shot, shock wave, limit, previous weapon and next weapon (my choices were □, ×, L2, L1 and R1). Unless you’re just starting and want to watch the in-game tutorials, I suggest turning them off because they can be annoying. Switching weapons is self-explanatory, and shock wave/limit are only to be used when you have them in stock. Only a single shock wave item is allowed at once, so whenever you see another coming you can dispatch the current one for extra destruction power if desired. Limit is a special attack that builds up automatically and detonates a screen-clearing attack that melts all bullets and weak enemies. Besides shock wave and the third weapon types, here’s a summary of the other possible items: P (power-up), large P (power-up), speed-up, 2222 and 9999 (bonus points), extra multiplier tokens (+1, +2, +4), chaser (temporary option, up to four at once), heart (health recovery), shield, chain points up, chain freeze, secret key and extra life.

Each life comes with a health bar that can withstand many hits. When this health bar gets down to 20% the music changes but there doesn't seem to be any increase in firepower levels like in Söldner-X. “Life regeneration” is activated after a while and slowly refills a little of the lost health in order to get you back in the safe zone. Of course there are rewards for not getting hit and performing well overall. The better you play the harder the game gets, as symbolized by the dynamic rank on the top right corner of the screen. It goes from G down to A and then S, which comes with the best scoring possibilities but also enemies that get increasingly more aggressive and cause more damage (in fact you can die instantly when hit by certain enemy shots). An S rank is the key to scoring higher since its base multiplier is ×24, excluding extra multiplier additions. Don’t mistake these rank levels with the rank tags you get upon defeating bosses, those are just a direct measure of your performance as a whole in the level (but especially how fast you’re able to defeat the boss).

The last component of the gameplay is ring chaining: by collecting rings released by enemies you fill up a bar gauge in the lower right corner of the screen, and when the gauge is full the item that’s trapped within the round meter will be released for pick-up. Note that this round meter controls the rate of ring collection: don’t let it get empty otherwise you’ll reset and lose the cumulated energy in the chain bar. The round meter only depletes when you use your weapons, so quit shooting when you hear the message for “chain meter low”. It will start to recover a little, but in the heat of the battle it’s often better to go after another ring at once in order to keep the chain alive (a single ring refills the round meter completely). Remember that rings remain stationary and disappear after a brief while, so don’t take too long to collect them.

I don’t think Söldner-X 2 is aesthetically superior to the first game for a single reason: the background scenery moves too fast. We’re never given the chance to properly appreciate the awesome details in the backgrounds, as if the game was in a desperate hurry to get somewhere. In a sense, it spoils most of the graphical excellence with an exaggerated scrolling speed. The only levels that seem to have real soul are the ones that contain obstacles and show some environment interaction, such as the ice caves or the factory in stage 7. However, the real problem of the game starts when you decide to play it with a 1CC in mind from the get go. Stages 5, 6 and 7 require a certain number of secret keys to be collected in previous levels in order to be unlocked (at least 4 out of 5 secret keys in one, three and six stages, respectively). That wouldn’t be a problem at all had the developer not included a few stupid criteria for these secret keys to show up, such as luck. Yes, luck.

Unlike in the first Söldner-X, which had secret keys in specific places and demanded you to find them in order to play the last level, here memorization alone doesn’t cut it. The only well-thought example of an extra requirement is the last secret key in stage 5, which will only show up when the 16th chain is completed. Since you need to get at least 4 keys in each level in order to see stage 7, you can’t just play for an S rank or survival in stage 5: you need to carefully chain the whole level and maybe still milk the small enemies that circle the boss at defined intervals (don’t take too long to kill any boss though, if time runs out you get an instant GAME OVER). But alas, here comes the real problem: all stages have at least one secret key that requires a rank level of B or higher to appear, and some of these have a 50% chance of not appearing at all. From my experience all levels are okay once you’ve practiced them, except for stage 3. As much as I tried to figure out the spawning criteria for keys #3 and #4 I just couldn’t: high rank levels, don’t miss any enemy, kill them in a certain order, kill them fast/slow, shockwave them... Sometimes those bloody secret keys just don’t come, as well as key #5, which is also prone to not coming due to probability!

Imagine having a very nice run up until stage 3, and then the game screws you by negating two keys, thus negating access to stage 7. That’s what I call serious bullshit.

Of course the above couple of paragraphs has no bearing at all if you don’t mind replaying the problematic levels over and over (stage select possible) in order to find the secret keys and unlock the stages. In this process you might even unlock extra weapons (bow laser, fog, rocket, mines, r-gun, etc.) that make the game considerably easier. Unlocking weapons or achieving special rewards basically happens when you come across a RARE item, a glowing orb that will only appear if you play well enough. Unfortunately you can’t use the unlocked resources right away, only in subsequent credits. I don’t mean to sound grumpy, but that’s just more bullshit piling up in the batch of “improvements” made to quench the casual slice of the game’s target audience. In my eyes a shooter commits suicide whenever it implements long term unlockables that forcefully impact gameplay. After all, there’s a huge difference between playing a blank installation of Final Prototype and one that has been played for months while being whored for gameplay extras and trophies. I can cope with the weapon unlocking thing, but the secret key scheme not allowing people to beat the game on a first run has left a sour taste in my mouth.

There are other minor issues in Söldner-X 2, such as the complete random nature of power-ups and default weapons not changing sprites as they get powered up (only differences are in strength and rate of fire in a few cases), but they're not nearly as unnerving as the secret key thing in my opinion. By finishing the game the player unlocks a harder difficulty level, in a total of three extra settings (Hard, Extra Hard and Massive Attack). Special missions can be completed in order to unlock new modes and functionalities, and while playing in co-op both players will always share the same life stock. There are offline and online leaderboards, with the latter allowing you to view replays.

My goal was to beat the game on a clean slate with nothing unlocked, and below is my best result playing on NORMAL with the Mexxus II ship. I managed to accomplish the 1CC a few times during the process of learning the game, but when I tried to improve my score it kept screwing me over in stage 3... In my very last attempt I didn't get the final key despite having an S rank! Patience had dried out by then, so I just quit. 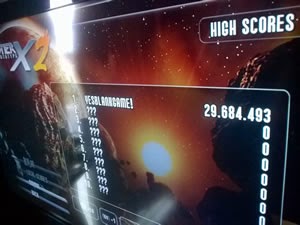