Paranoia is a very strange little game, starting with the name, and if it wasn’t for its release in the West as Psychosis it would be even weirder due to obscurity. While not exactly engaging by standard definitions, this little shooter tries to offer a dose of surreal action partially inspired by the primordial mechanics pioneered by R-Type, with graphics that tend to use saturated colors and in my opinion visually evoke stuff as diverse as Deep Blue and Thunder Force II. The sluggish default speed of the ship and the adoption of checkpoints don’t allow it be a totally friendly shooter though, requiring an approach that might be just a little more methodical than your average PC Engine horizontal blaster.

Button II shoots and button I cycles the position of both satellite orbs created whenever you pick up one of the power-up items. Items are always released by the fifth enemy within a recurring wave and have a particularly interesting entry animation – as if the game’s fabric was torn and the item was thrown into its reality, slightly floating up and down for you to take it. Besides speed-ups (S) and generous shields (glowing items), three types of power-ups can be collected in order to enhance the firepower provided by the default straight shot: close-range electricity bars (T), wave shot (W) and rear laser beams (B). Firepower is transferrable across all weapons with four upgrade levels until you reach maximum power, whereas weapon firing direction follows the current position of the orbs. 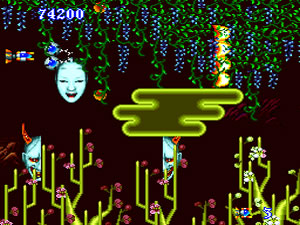 Zip through a Japanese plant nightmare

All five levels (or "causes") have very specific environments, and all of them demand proper use of the satellite orbs as a defense mechanism (these things inflict serious damage and can even absorb lasers!). By moving the ship towards the direction the orbs are facing they spread out to the sides, closing in again when you move in the other direction. This means that if you want to keep them together in place you can only move away from the orbs’ direction or along the corresponding perpendicular line. It sounds a bit complicated on paper, but after a while controlling them becomes second nature. Other than that, realizing their importance for defense is half the battle of looping Paranoia. The other half, of course, is memorizing the stage layouts and how to get back up upon death.

From the first stage, a short stride into and out of a wide cave with backgrounds of sandy beaches and clouds (!), to the last stage inside a much darker cave, Paranoia also takes the player through landscapes of trippy blocks, gloomy Japanese gardens and the insides of an Indian fortress. While it doesn't seem that obvious, the close-range electricity field (T) can actually be one of the most useful weapons. It’s possible to easily get rid of the zipping fast creatures of the 4th stage merely by carrying it and staying low. The advantage of the wave cannon and the laser are their ability to pierce through everything, which is great against bosses that have tiny or shielding weak points. The metallic fox of the third level, for example, can only be hit when it lifts the head at regular intervals, and if you don't have wave or laser 95% of the attacks will be deflected by the armored bodyguards, forcing you to make the fight more personal. The problem with the laser is that you have to keep the satellites on the back of the ship and deal with the awkward firing angle.

I died cheaply a few times in the second level because of the color choices of the blocky walls, which don't make a good job of conveying borders at the absence of parallax layers. Flying behind the foreground vegetation of the third stage can be tricky, so watch out for the little devil that controls an arrow that hints at which corridor the flying faces will come from. By the way, this little creature seems to be the same alien goblin that gives you the finger in between levels while a very muffled sound seems to say "fuck you". How's that for another crazy bit of surrealism in a game that's supposed to take place inside the mind of a psychotic person? Video games were cool back then, I'll tell you that.

Of special note here is the atmospheric music, that manages to be fitting, eerie and strangely appealing at the same time. Speaking of surreal, even though it's not clearly defined anywhere the enemy design is mostly built around an insect theme. It's as if the crazy worlds imagined by the game were infested by little bugs, and the ship is some sort of spray can with its spinning arrow appearance. Watch out for the small caterpillar that appears at the very beginning of the game. If you manage to protect it from being raped by the giant ants without killing it, a flock of butterflies will appear to help you on the fight against the first boss. There's also a turtle that comes to protect you from the falling bricks if you manage to reach the 4th level without dying.

Dealing with checkpoint recovery is fun, in that they're never too hard to handle. In order to recover faster it's better to let some enemies live longer until they spit out one of those power-up little bugs. Examples are the big orange egg in the first stage, the thorn-laden nests that come from behind and the huge spikes hanging from the ceiling, both in the second stage. Avoid destroying waves close to the borders or walls, since power-ups can drift off the screen or inside unreachable areas. For every 50.000 points the player is awarded with an extend, and considering that the second loop increases the challenge considerably an inflated life stock is very welcome once the extra round starts. The main difference in the second loop is the blazing fast speed of enemy bullets and the increased health of bosses.

There is no way to preserve scores at all in Paranoia, so unless you pause before you die your last life you won't be able to register your results. In the picture below I was about to start my final attempt at the second boss on the second loop. 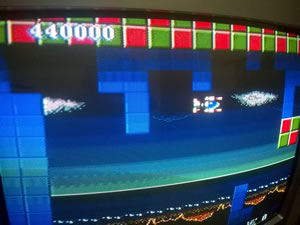