Whenever I need to write about games like Robodemons I can't help but feel I should apologize to those who read this blog (huh... did I ever?). I don't refer to the fact that some people wouldn't consider it an eligible title for something shmup-related, since we're talking about a hybrid. After all, I welcome all sorts of hybrids here if the shmup part in them is of substantial significance. My apologizing is actually related to the fact that Robodemons is such a bad game it hurts. But then again, those familiar with the history of NES unlicensed material know very well what to expect from Color Dreams, the rogue company behind this atrocious mix of shooting and action.

Evil demon king Kull has created a machine that transplants the souls of demons into the bodies of robots. As the brave hero, you will be descending into seven levels of unspeakable horrors in your mission to defeat Kull, kinda like in Dante's Divine Comedy. Levels are themed and named accordingly, as in the level of bone (1st), flesh (2nd), fire (3rd), etc. They're all comprised of a horizontal shooting part and a platforming section abridged by short captions with stage names or something about the story, which are hard to read due to the poor choice of fonts and colors. By the way, POOR is the word of order in this game, an experience that in these days should only be had by masochists or demented players looking for a reason to giggle.

How much pain can you take?
(courtesy of YouTube user DeimosComaBlack)

There are lots of things wrong with Robodemons, which either annoy or downright kill any sense of thrill a good video game is supposed to convey. One of them is the nature of the warrior's attack, a magical boomerang (button B) that disappears in thin air before returning to the character. You can't fire more than one boomerang at a time, which means you're basically a sitting duck if you miss the target and have to wait to shoot again. This is especially aggravating during some of the flying areas because lots of enemies tend to quickly sweep onto you. Unfortunately there are no power-ups or different weapon varieties at all during the quest to bring down evil king Kull... The player is doomed to only use that dreaded boomerang.

When you enter the platforming areas button A becomes active as the jump input. All action pieces are laid out so that you either need to find a key or destroy/collect all of the special entities in order to leave the room through a big door. In the process there might be a few powerful enemies to defeat and several smaller doors that serve as magical gateways that take you to different parts of the level. Everything is very simplistic and does not incur in any grinding besides learning how to deal with a few design problems, such as the hideous choice of colors in the second platforming area or the moving boards in the third stage draining your health even though there's no reason for it at all.

In order to make things bearable, each life comes with a health bar of five hearts. Unless you fall into a pit and lose a life instantly, this health bar takes some time to deplete and can be extended by taking extra hearts left behind by specific enemies within a level. By "extended" I mean that with the extra hearts you can stockpile lots of health. The only other item that appears in some of the flying areas is a small face that grants you an extra life. 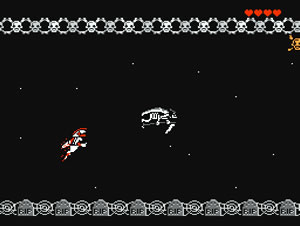 Bone creatures amidst skulls and tombstones

Robodemons is ugly and generally awful to look at, but none of this crappiness is hinted at by the detailed descriptions of the instruction booklet. In a sense, it promises Castlevania but delivers Dark Castle. There is only one single song that plays from start to finish, the main character looks like an old bearded man with rheumatism and the enemy gallery follows the same disjointed animation standard. Expect to see skeletons, demons, flies, robots, zombies on fire, green pac-man lookalikes and even flying faucets - watch out for them at the start of the fourth stage, they're all very slow and give you lots of extra hearts. Later on the game even throws some beat'em up traits on you in the demon factory level, where you need to kill authentic robodemons and destroy demon breeding machines that look like fuse bombs.

The good news about this painful experience is that it's also a very short one. Some of the shmup parts are so short you'll be left wondering if something is wrong with the cartridge. Overall, the game will be over in a snap once you've come to grips with all of the annoyances in every level. A few tips: enemy shots can be blocked by your boomerangs; enemies never return once killed; whenever possible try to kill them in safety from behind walls or from different heights; brute force works if you have lives left and demons get cheaply aggressive (in the last stage).

The only way to see your score while playing is by presssing SELECT. The screen below shows mine just as I was about to dispatch Kull and save the Earth from his robodemons. Good riddance, demon lord, my mission is accomplished and I can move on to the next stinker! 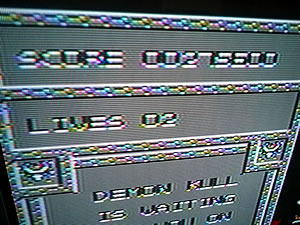