And here we come to the behemoth checkpoint-based outer space adventure Pulstar, directly inspired by the golden pillars set by Irem, the company that defined a whole branch of the shooting genre in its R-Type series. Some people consider it a rip-off, others hail it as a homage. I tend to agree with the compliment since Pulstar is different enough to stand on its own even though you can spot many design similarities with both R-Type and R-Type II. The strongest asset that warrants the comparison is the presence of an invincible force pod that protects the ship. This pod, however, is not detachable like in other shooters built upon the same mold, such as Xexex or Ironclad.

Regardless of origins or influences, Pulstar comes off as one of the possible natural developments of Irem’s prime formula. Prerendered graphics intertwine with exquisite pixel art to deliver longer levels and provide an experience that borders the epic. I’m also very fond of the music, which opens with breezy, uplifting themes and evolves to ethereally ominous, truly dark pieces by the time you reach the last stages. I’d also say Pulstar is one of the most beautiful shooters of its generation, if only for the eye candy and the impressive scope of its design. But hey, it’s not without faults, and that’s the reason why it doesn’t top the finesse of its forefather. 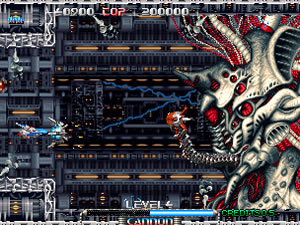 Front line on the Earth

A lovely animated intro shows the heroine of the game departing for battle. As the most basic input, button A is used to fire. Firing can be accomplished by either tapping or charging, both actions gauged by the cannon meter positioned at the bottom of the screen. Hold down the button until the meter is full to the right and release it to fire a powerful blast (partial charges are possible at the expense of power). Likewise, the quicker you tap the button the more you fill up the left side of the power meter, a feature that adds almost nothing of real use to the gameplay (keep reading). Little robots act as carriers for power-up items, which come labeled in roman letters and greatly affect gameplay.

Essentially, taking any of the five available weapon types creates the pod at the nose of the ship. The first pod is small and offers little protection, but as soon as the second power-up is taken it grows to its normal size. Weapons types consist of N (wave shot), P (bouncing lasers), T (trailing homing lasers), R (straight laser) and F (electrical shield, damages by contact but doesn’t stop bullets). The only weapon that emphasizes tapping instead of charge shots is F, since the purple electrical shield is only generated and held at its nominal radius if you keep the tapping gauge full (charge shots still work but without any extra firepower). Now this is where Pulstar starts to lose some of its shiny glow: due to how the developer has shaded the weapon items it’s impossible to differentiate an F from a P. For a long time I wondered why some Ps gave me lasers and others gave me the purple shield. Thankfully there are only a few Fs throughout the game so it’s easy to avoid them if you want.

Remaining items consist of S (speed-up), C (charge speeder) and I ("bits" that hover above and below the ship and grant a little extra directional firepower). Cs are extremely important to kill bosses and tricky enemies faster. Bits are free-aiming by default, but to lock them in place all you have to do is press button B. However, beware not to do this while you're pressing A because A + B sacrifices the force pod in a panic attack whose effect depends on the weapon you're using. This works as a last resort on the face of imminent death since you'll be invincible as the pod detaches and explodes in front of the ship. I find this feature particularly useless, and the only times I did it were either when I was learning the game or when I pressed the button by accident.

The good news about the S pick-up is that the maximum speed is perfectly manageable – I’d even say necessary – so you don’t need to avoid any S while playing. Additionally, the hovering bits of Pulstar are also capable of blocking regular bullets, unlike in R-Type! As you can see, a ship equipped with a force pod and two bits has its frontal hull very well protected. Handling this protection is crucial for survival in the second half of the game, regardless of the weapon you decide to use. Speaking of items, score chasers must be aware that every single one is worth a few points. Note that simple score techniques such as checkpoint exploitation must be done very carefully because the stage bonus of 50.000 points is reduced the more you die in a level. Die once and get 30.000 points, die twice or more and get only 10.000 points. The only stage where checkpoint abuse might be a good idea is the last one, but be warned that all recoveries at that point in the game are extremely tough.

While fairly amusing from start to finish, Pulstar has a few quirks that only become apparent when you spend more time with the game. Slowdown, for example, is a constant companion that has its pros and cons. It definitely helps during busy sections that demand heavy crowd control, but on the other hand it factors into the numbness that takes over the first half of the game. No matter how awesome the opening to the 3rd stage is – with flaming arches crossing the screen while lovely backgrounds scroll by and enemies approach from both sides – the battle against the huge organic battleship almost brings the game to a halt. Half the 4th stage being the destruction of another large spaceship doesn’t help either, which in the long run hurts the flow of the game to the point where it will take a greater deal of shmupping love to persevere into the following trickier levels.

In between the several throwbacks to R-Type in stages 5 and 6 (robot showers, dismantling snakes, blocky creatures travelling within a tight maze) and the memorization nightmare of the last stage, the developer has also included minor homages to Gradius (the indestructible spider) and Darius (the giant moon surfaces of stage 7). I absolutely love it when the screen shakes as if the very fabric of reality is being torn by the destruction brought about by the player, like in the demise of the spaceship in stage 4 or the waterfall passage in stage 5. As a side curiosity, the abundance of phallic imagery in Pulstar is remarkably explicit. The tip of the organic battleship, the weak spot of the 7th boss and the series of pink cocks trying to crush you in the last stage easily top anything included in other seriously themed shooters like R-Type II and Wings of Wor.

On the default difficulty (4) the extend routine is 300.000 points for the first extra life, then successive extends at every 200.000 points. Milking key enemies and bosses is possible, but this doesn’t really add much in the final score. There are mysterious techniques to get more points on the last boss, but I haven’t bothered with those because they involve suiciding.

My 1CC score is below, playing on difficulty 4. Note: developer Aicom morphed with a branch of SNK into Yumekobo, the company that made Blazing Star years later. If only on aesthetics, Blazing Star is considered by many as the spiritual successor to Pulstar. 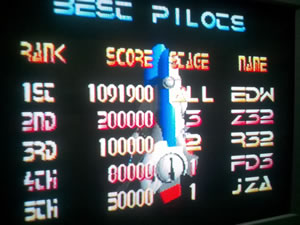