There’s one single truth about many long-running shmup franchises: despite all the efforts and sacrifices of brave pilots from all around the world (or galaxy), evil will never really subside. At least this was the rule back when shooters were real and profitable for developers. No matter how successful we were at defeating those hideous monsters there was always an ominous villain lurking in the shadows, waiting to strike again in the inevitable next chapter. Sonic Wings 3 is no exception to the rule, since it follows its predecessor Sonic Wings 2 with that same vibe and a backstory that, well… doesn’t really matter in the end.

Who cares about story anyway? Let them alien baddies come!

What matters is that, for those who thought the second game was too hard for its own good, Sonic Wings 3 – or Aero Fighters 3 in its Western incarnation – is far less punishing and a tad more approachable than Sonic Wings 2. I say that based on how much I had to suffer to loop part 2, whereas part 3 caved in after only two sessions of relatively relaxed play. Blame it on the more easygoing pace, the reduced aggressiveness, the slower bullets and the new assortment of planes and pilots. If you’re a fan of Spanky don’t worry, he’s back with all his lovely dolphiness to cheer you along the way. Unfortunately Baby Bobby must’ve had to go to school or something, since he’s not to be seen anywhere in Sonic Wings 3. 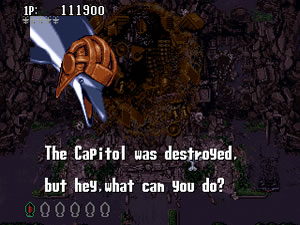 There are ten pilots distributed across five countries (USA, Japan, Russia, Germany and UK), with some new faces joining well-known characters like the stern ninja Hien, everybody's favorite viking Kohful and Rafael's darling dolphin pilot Spanky. They all use two buttons only (fire and bomb), but this time the differences between them are even more pronounced and polarizing, to the point where it practically breaks the game depending on your adopted approach.

The greatest departure from the old formula is a branching feature that allows players to choose the next stage (or stages) in certain levels. Once some bosses are defeated a harmless helicopter-like enemy will materialize: the choice of level depends on which wing of this helicopter you destroy first. Different paths lead to distinct bosses and might result in easier or harder campaigns of eight stages in each loop. By the way, don't expect levels to be exactly the same in the second loop. Not only enemies become more aggressive and start shooting different bullet patterns, but bosses can be completely replaced and bonus levels totally disfigured when compared with what you see in the first loop.

For each choice of pilot the player receives a very particular type of shot as well as bomb. Pick up P items to power up shot, and B items to increase bomb stock. Three Ps will max out firepower, but after a while the plane will revert back to the power it had with only two Ps; then you need to take another P to max out power again. Ps taken before this power-down time window expires (which actually depends on how much you shoot) are converted into 2.000 points each. The only pilots/planes that differ from the norm are Spanky (Russia) and Malcolm (Germany), which have special charge shots activated just by holding and releasing the fire button. Regardless of the ship you choose, chances are you'll need to rethink most of your strategies once you change characters because they all behave differently in firepower, bomb effectivess and power-down times.

For a game that's so old-school in nature, Sonic Wings 3 does incur in serious faults with regards to scoring. The medal/money collecting scheme is back and preserves the idea that the closest to the top of the screen you collect a money icon the highest value it will have. Anything below that will decrease the value down from the maximum of 10.000 points to only 200 points if the medal is taken in the lower half of the screen. However, unbalance raises its ugly head as soon as you reach the first boss, since the money fountains on both bunkers besides the capitol can deliver varying amounts of medals. It's unnerving to get less than 200.000 points prior to the boss fight, when you know sometimes it should give you more than 300.000 points. 300.000 points, by the way, is where you earn your only extra life in the whole game.

Scoring quirks however run deeper than that. With the branching system it's natural to expect some levels to give you more points than others, even though they're not as fun to play depending on the selected character. On top of that, with regular final bosses being replaced for stupid variations all of a sudden your score might be severely compromised (note the homage to Darius if you get to fight the mahjong doll). The greater variety of bonus levels can also lead to areas with a relatively low amount of medals or power-ups. This opens up another can of worms for scoring, especially if you consider Mao Mao and her time-freezing bomb in the bonus level of the two large planes (3rd stage if you take the right route after first boss). Considering that her ship is a weak piece of junk, this scoring advantage does require players to have a lot more skill if they decide to use her and exploit that particular milking technique. And no matter how much I don't like to admit, indeed she is the best choice for score-chasers.

When I started playing the game I was appalled by the music, which I found to be completely atrocious except for the song in the first level. After a while it started sinking in, and now I believe it fits the action quite well. Character interactions remain very humorous throughout the game, and different endings await players who are brave enough to face the game in co-op mode.

My best high score on Sonic Wings 3 is below, playing with the Blazers plane on the MVS difficulty and using a turbo controller for proper autofire (tapping is okay though since firing is achieved in very short bursts). In this run I reached stage 2-4. 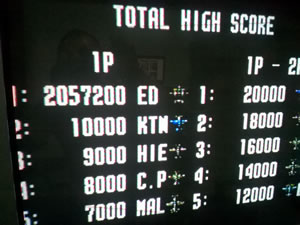