Even though I never paid much attention to the show, my impression is that TaleSpin was moderately successful among its target audience. Originally aired between 1990 and 1991, I didn’t see much appeal in adventurous Disney projects such as this one or DuckTales, and never really cared about either of them. However, ever since video games were invented there’s always been a good side to cartoons we didn’t like to watch. Such as that great DuckTales NES platformer, for example. Or Tiny Toon Adventures and Toxic Crusaders on the Mega Drive. Of course none of these will ever be covered in this blog, but out of three games based on its characters I was kinda thrilled to know that TaleSpin on the NES is actually a shmup.

Centered around the main characters from the show, the game is structured in eight stages where Baloo flies the Sea Duck cargo plane picking up stuff for delivery after beating the boss. Button B shoots and button A is used to revert the scrolling horizontal direction where applicable, allowing Baloo a little room to explore the level layouts and collect everything there is to be collected. When doing this you need to beware of respawning enemies because they’re regenerated really fast. At the beginning of the game each life comes with three hearts, and if you get hit on the last one the Sea Duck explodes and Baloo goes down hanging on to a parachute.

In order to see your score, life count, health and number of cargo boxes collected the player has to pause the game with START. 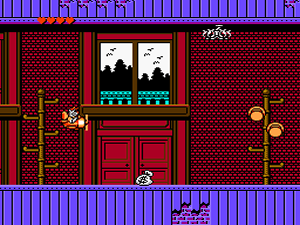 With the Ghotsbusters retired, it's Baloo's duty to cleanse a haunted house in stage 4

TaleSpin is a slow paced shooter, with little to offer in the way of excitement. No matter how you look at it, it’s just another run-of-the-mill effort by Capcom. And while it’s not hard by any stretch of the imagination, it does incur in one major anomaly at the very start: the speed of Baloo’s single round bullet. It’s so slow that it gets hard to hit most of those staggering or fast cruising enemies that populate the first level. And once a bullet is fired you need to wait for it to leave the screen to shoot another one, which almost turns the game into a pseudo gallery shooter. Granted, the closest you are to an obstacle or an enemy the fastest you’ll be able to shoot, but this certainly doesn’t help against moving foes.

The workaround for the slow shooting rate is buying the rapid fire enhancer offered by Wildcat in his shop before the start of the next level. Note that this item doesn’t really endow the Sea Duck with rapid fire, it merely allows two bullets on screen at once. That’s at least better than only one, of course. Purchasing items from Wildcat is made possible by collecting money bags and cargo boxes during the course of the stage, but these aren’t the only things you’ll come across when flying around. There are also lots of fruit, hearts (to refill lost health), 1UPs and hidden gateways to bonus areas. Hidden items, by the way, are scattered everywhere and reveal themselves when their location is shot. So it’s advisable to never stop shooting, and I also recommend shooting at every single corner and every little gap inside walls. After all, the chances of finding hidden items in these places are very high.

Other enhancements available at the shop hosted by Wildcat include a second firing rate enhancer (4 bullets on screen at once), an extra heart for more health, a single speed-up, extra lives and extra continues - the last two increase in value with every purchase, just like in Fantasy Zone. The items that matter are very expensive, and it’s very hard to buy more than one per level. Note that whenever you pick up all cargo boxes you achieve the "perfect" bonus score at the end of the stage, which gives you even more money to spend.

An important aspect of TaleSpin is that you don’t get any points from killing what you’d normally call regular enemies. Since some of them are very awkward to kill that’s a sort of unexpected relief, but if this is the case where do points come from? Answer: they come exclusively from fruit! Cherries, raspberries, bananas, strawberries (the most valuable, these ones), found in the wild or inside crates that float up or come floating towards you (shoot to release the item). Not only is it good to find hidden item spots to score higher, but you also should be able to find the entrances to bonus areas. In these sections Baloo steps aside so that you can control Kit Cloudkicker in his quest to pop hearts and take what’s inside before the time limit expires. There are only two types of bonus sections, and at least in one of them I was able to get all items.


Meet the biggest, baddest baseball you ever saw!
(courtesy of YouTube user Patrick So)

Capcom was nice enough to include some bits of story in the game to please fans of the show. At the start of every stage Rebecca briefs Baloo on what his objectives are and which type of enemies he’ll be facing. Most of them are comprised of Lord Karnage’s henchmen, with Karnage himself awaiting in his Iron Vulture warship at the end of the game. Graphics and colors are standard Nintendo 8-bit fare, and while some boss designs come out as rather interesting (ghost boss, the jungle alligator) they are mostly a joke to beat. I don’t know if the soundtrack reflects the music from the show though.

When Baloo flies to the left the sprite for the plane is shown upside-down, which sounds really odd, and whenever you’re briefly aligned with diagonals it’s also possible to fire in those directions. Diagonal firing is quite unreliable though, so I didn’t count on it at all. The only instance where I used diagonal shots was against the boss inside the cave level (tip: hug the rightmost side of the screen for a safe spot). This particular boss is also one of the enemies in TaleSpin whose designs remind me a lot of the Mega Man series. Too bad the difficulty here is the exact opposite of Mega Man, just check how the game hands out extra lives like candy.

Since the game halts at the ending screen after you beat that ridiculous last boss, you need to pause it before he goes down if you want to get a glimpse of your final score. Unfortunately you can't see your $ earnings in this screen, otherwise this could be another way of gauging your performance in the game. Here’s my final snapshot: 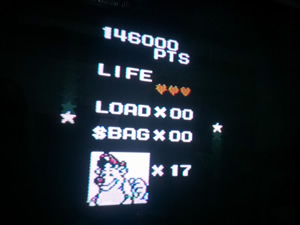