The STG division at Konami surely loved the SNES back in the 90s. The company graced Nintendo’s 16-bit platform with solid titles, be it ports or exclusive games, and helped put the competition against Sega’s mighty Mega Drive on fair grounds. A long running Gradius spin-off series, the Parodius games were well-represented in that regard, with three excellent cartridges that shouldn’t be absent in the shelf of any serious aficionado. Coming right after Parodius Da!, Gokujyou Parodius again brings home the workings of those evil wacky penguins while – expectedly so – toning down the difficulty of the arcade original. Which was a good move, I should say.

Awesomeness, in this case, relates to many things, including a welcome approachability towards the structure devised by Konami for Gokujyou Parodius, released only in Japan and in Europe as Fantastic Journey. Not only do we have a spaceship level that appears randomly throughout the game (and isn’t completely seen unless you don’t die in it), but players who beat the final boss are also faced with a Special Stage right after the credits, an ingenious carrot placed by the developer in order to lure those who’re brave enough into pursuing an extra achievement. This Special Stage serves its purpose as a worthy substitute for the loop in a game that doesn’t loop by default, while at the same time presenting reasonable challenge on the SNES port (for mortal gamers like me, in the arcade original it just feels impossible). 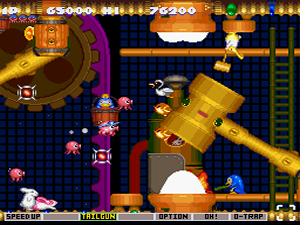 Modern Times for Takosuke and his companions

I’m getting ahead of myself though. Unless you’re a total beginner in this genre or you’ve been living in an alternate dimension where Konami doesn’t exist, you certainly know what Parodius games are about. At their core they’re mocking everything about the Gradius franchise, from ships to iconic characters and stages. It borrows the main gameplay rules for power-ups, meaning you have the same weapon array and the same capsule collecting scheme where players activate the desired upgrade by pressing a button whenever the upgrade is lit in the weapon array. A third button (after shot/missile and power-up) is responsible for triggering the stored effect of a blue or brown/red colored bell, a trait inherited from the Twin Bee franchise.

What started out as a franchise mockery, however, begins to evolve into something unique in Gokujyou Parodius when you pay close attention to the game. The character roster, for instance, expands far beyond the idea of an avatar with trailing options, while elements from other games/developers also show up in the design, with rather obvious nods to classics like Xevious, Galaga, R-Type and Darius. It’s the epitome of a warped homage, blended in a surreal adventure that becomes even more diverse depending on the selected character, in a sequel that’s shorter but slightly wackier than predecessor Parodius Da!.

Regular upgrades such as missiles, double, laser and options will be very familiar if you know Gradius well and choose Vic Viper/Lord British, Pentaro/Hanako or Takosuke/Belial (P1/P2), but might display completely different behavior with characters like Koitsu/Aitsu, Mambo/Samba and Michael/Gabriel. Unlike the arcade version, which pretty much requires players to go with Koitsu in order to beat it, the same does not apply in the port so it’s a lot more fun to test out different characters here. And as usual for console ports developed and released by Konami, the company gave the game a special touch by adding three new characters to the roster: Goemon/Ebisumaru, Upa/Rupa and Dracula-kun/Kid Dracula. All these characters have new powers that are loosely based on other Konami games.

Besides some cosmetic tinkerings, this port of Gokujyou Parodius differs functionally from the original by having mandatory checkpoints regardless of the selected power-up scheme: in MANUAL all upgrades are up to the player, in AUTO the game automatically applies the upgrades except for roulette items, those "contaminated" capsules that make the weapon array go crazy and require the player to choose one upgrade to cut out of the quick cycling. One of the reasons why AUTO doesn't eliminate checkpoints as in the arcade game is that the port only allows alternated multiplayer, ditching the ability to play simultaneously with a friend.

Players earn extra lives starting at 20.000 points and at every 100.000 points afterwards, in an extremely generous extend scheme. Since checkpoints aren’t that taxing, these extra lives are great for those who like to exploit them for scoring, in particular the very last checkpoint of the Special Stage (score extends are absent after the end credits). There are lots of bells to be collected there more than in any other part of the game, and here’s a brief recap of how they work: yellow bells are the norm and evolve in value from 500 to 10.000 points if you don't let any fall to the left of the screen. By shooting them a certain number of times they cycle colors that provide special abilities: blue (powerful single bomb), green (instantaneous inflation + invincibility), white (instantaneous activation of a powerful shot with random messages in kanji), brown/red (three vertical energy bars) and purple (turn all popcorn enemies into power-ups/bells at once).

Compared to the arcade original, Gokujyou Parodius is a lot lighter in difficulty and doesn’t bear the same rage-inducing factor that comes with an evil rank system. Rank is still there but is much less aggressive, and only really hits if you max out power and decide to activate the shield (having many lives in stock will also increase enemy bullet count/speed). This port relates to the arcade version kinda like Gradius III does to its source, even though Goku Paro is more faithful overall and merely reduces the scope of everything for the SNES processor to cope with the mayhem. Nevertheless slowdown kicks in heavily in certain parts, such as the candy stage and the octopus flocks of the Special Stage. Flicker can be a minor problem in a few areas, all of them happening when those ring-shaped shots overlap with regular bullets and enemies.

When a game is this fun and so exquisitely crafted, it's always great to try it with as many characters as possible. Maybe in the future I'll venture into that, but for now I'm satisfied with clearing it completely, Special Stage included, with Dracula-kun at full default settings (difficulty 4, autoshot ON, roulette ON, revival OFF, 1 loop end) on AUTO power-up mode. The final score is shown below. 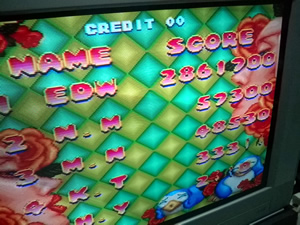 Next: Jikkyou Oshaberi Parodius.
Posted by Edward at 10:09 PM