All hail the mighty hands of Sachen, for yet another unlicensed shooter made by the company once again graces the records of this humble completionist blog! I still remember the day this game was brought to my attention by my fellow shmupper Ben, along with the ever-so-enticing British denominator that often tags along with titles of this caliber. By that time we used to hunt down all shooters that were still missing from our collections, and being the fanatic that I am I still felt the urge to go after Mission Cobra even after he told me the game was bloody awful.

Given the fact that the original Eastern name of the game is Sidewinder, it's perfectly understandable why Bunch Games changed it to Mission Cobra. If you're going to pilot a helicopter, why not have it be bastardly related to classic Konami and Toaplan for great injustice? If there once was Super Cobra and later on players had to face the evil clutches of Twin Cobra, why not finally endure the ultimate NES challenge imposed by Mission Cobra? You can do it solo or you can force a friend to do it with you. I tried to get a buddy but I failed.

Okay, I'm lying. I was all by myself. 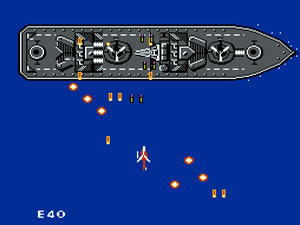 Although the enemy sprites change a bit from one level to the next, the structure of all stages in Mission Cobra is exactly the same: two initial enemy waves, a face-off with a pair of "black patrolling choppers", another enemy wave, a section with fast scrolling and then the boss. Enemy waves across stages behave the exactly same way, such as the first foes retreating before touching the bottom of the screen (stay there and you'll be safe), the second type bouncing back from the bottom and the final wave flying past you. It's kinda like having an upgraded Atari 2600 game on the NES, which is sort of charming for a couple of minutes. Unfortunately Mission Cobra becomes boring even faster that you'd normally expect, starting with the atrocious low-key humming that's supposed to serve as soundtrack.

The core of the gameplay starts with weapons fired by button A, each one activated by collecting the corresponding icon randomly left behind by destroyed enemies. There's the default single straight shot, a double shot, a triple shot, a 3-way spread shot and a cross-pattern 4-way shot. The more streams you have the lower the firing rate, with no autofire in sight (yes, you should have a turbo controller to play this one). There are no visual upgrades for sticking to the same item, but if you do it eventually you'll notice the ship moving faster and being able to fire more shots per screen. Since you're only powered down when you finally die and lose the credit, that's the main reason why Mission Cobra actually gets easier as the stages go by.

Regardless of how lame Mission Cobra is at least one aspect about it stands out, for which the game might be remembered by many: the fuel scheme that drains your energy as you play. Unless you collect energy refills you'll eventually deplete the fuel tank even if you don't get hit. An empty tank doesn't mean death, but the credit will be instantly over once you touch a bullet or an enemy in that condition. Fortunately there are many ways to preserve fuel, so many that the resulting item gallery for refills is a complete mess.

Starting out with E66, your reserve either steadily goes down towards E00 (zero) or sinks fast as you get hit by bullets or rammed by enemies; a large red potion sends you back to E66 whereas a red droplet refills E10; each patrolling chopper at mid-stage gives you six energy pockets for an extra E30, any weapon item gives a plus of E05 and once the boss is beaten another E30 is added to the fuel gauge. Now for the catch: energy pockets from patrolling choppers allow you to reach a maximum of E99, but there's no limit to how high you can go on droplets, weapon items and boss refills (HEX codes appear above E99). On the other hand, no matter where your fuel reserve stands a single red potion will send you back to E66. This means that both the red potion and the energy pockets can be detrimental to the fuel reserve if you have more than E67 or EA0, respectively. Finally, there's also an invincibility item that freezes the fuel consumption while protecting the chopper from all harm.

The major issue in Mission Cobra is that it throws so many fuel refill items that the challenge never really picks up. If only fuel items got scarcer with each loop things wouldn't be that bad, but alas! It takes just a little practice to play the game forever, especially when you figure out how much more effective the 3-way shot is. With just three stages that loop indefinitely with piss-poor graphics for sea, sky and outer space, the game also counts with simplistic bosses that at least can't be milked for points because only regular enemies are worth something.

It's only possible to see your score or high score in the stat screen that appears in between levels. The screen below shows what I had after stage 10 (4-1) before giving up on the game. If I remember correctly at that point a had a fuel reserve above ED0 (E130). 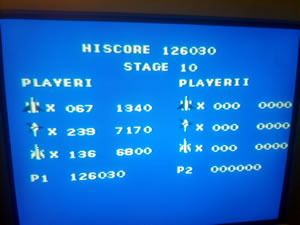