The birth of one of Konami's most famous franchises is finally here. While I can certainly understand the reasons why it made such success in Japan (not so much in the rest of the world though), coming to grips with its gameplay is always a process that tends to take a long time for me. Born in the arcades in 1985, not only did TwinBee prove to be the most accomplished evolution to Namco's Xevious, but it also spawned a series of arcade and console sequels that fleshed out the original idea in several different ways. Besides that, lots of additional non-gaming material would be created around its characters, which is something that to me sounds as interesting as watching paint dry.

With the exception of a few downgraded ports such as the one released for the Famicom, the first arcade TwinBee remained untouched in the console realm for years until it got included in the TwinBee Portable compilation for the PSP in 2007. The UMD also has all other main arcade entries in the series plus Pop'n TwinBee (SNES) and a rearranged TwinBee Da! (Game Boy), so it's only natural that the first chapter comes out as the least interesting game of the bunch. This happens because despite the depth in its gameplay, which is rather impressive for 1985, it's visually a quite drab vertical shooter that can't really be called a cute'em up in my opinion.

Regardless of how cute you think TwinBee is, playing it often causes a completely different reaction. I didn't get along with it at first, but thanks to the wise advice of a fellow shmupper I was finally able to deal with the aggressive rank progression in the game, an aspect that can pretty much kill the fun factor if taken for granted.

Just like in Xevious, TwinBee allows players to fire a main gun and drop bomb shots to destroy ground targets. These ground bombs come from the character's arms, which can be both lost if they get hit but soon recovered with a special ambulance item that cruises the screen only once (miss it and you'll be blind for ground enemies for the rest of the current life). These basic inputs aren't any indication of how hectic the gameplay can get, regardless of the player's inclination be it for survival or for scoring. In essence, they serve as basis for a primitive yet quite solid risk/reward mechanic that strongly left its mark within Konami shooting games.

Truth: everything in TwinBee revolves around bells. Or better yet, bell juggling. These are released by shooting clouds, and even though their color is primarily yellow shooting them again will eventually change that color to a different one: blue (speed-up), gray (double shot), green (shadow options) and red (shield). Getting these special items isn't necessarily easy, since the very next shot the bell receives will already change its color back to yellow and you'll need to bombard it again to get a different color. Considering that there's some randomness in the bell spawning routine, it definitely takes practice and patience to hone the ability to get the item you want. However, the game really shines when you're succesfully collecting maxed out yellow bells for 10.000 points each. It's a great rush indeed.

Enemy bullets in TwinBee aren't too fast, as they tend to overwhelm players by quantity while the enemy themselves try to ram you all the time. Therefore, in order to move around and dodge stuff decently at least two speed-ups are needed. Ground enemies comprise all sorts of turrets and moles, sometimes alone or in flock configurations that should be taken care of as quick as possible. When destroyed they are turned into fruit (oranges, strawberries, onions) or special items such as a star (screen-clearing bomb) or a static yellow bell (3-way shot, then a bouncing baseball if you still have the 3-way shot activated). These special items are extremely important because they're all benign and go a long way in helping you survive. 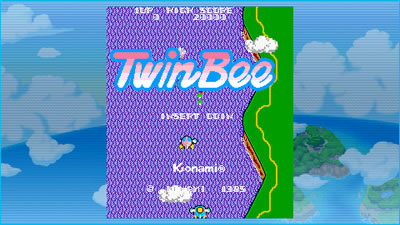 Frequently a combination of ocean, green/desertic hills and an occasional airplane landing field, TwinBee's landscapes are simple and not so colorful. Aerial foes will always arrive in waves whose behavior depends on the player's position and movement. While the game's natural difficulty slope naturally makes things harder, a single pick-up in the item roster can make it skyrocket: the green bell for options. Yes, it's seemingly a nice upgrade, but it should be avoided like the plague if you intend to at least loop the game. Strangely so, the way it's implemented always bugged me because in order to distribute the firepower you need to be on the move all the time (the options sink into the character when you're not moving). This means that besides making the game a brick wall the green bell also makes it harder to consistently juggle bell colors.

Even though this doesn't turn TwinBee into a cakewalk, sticking to the double shot, the 3-way shot and the shield is the way to go, with as many speed-ups as you see fit. Though gigantic, the shield can take lots of hits before shrinking and finally depleting. Once you're conveniently powered up it's the single most important item you can get, so don't hesitate to juggle them bells for a new one if necessary. The loss of an arm cuts your bombing capability in half, however it's not that much of a hindrance if you position yourself nicely before dropping bombs, after all they have a minor aiming ability and will always try to hit targets within a certain radius.

There are only two extends gained very soon in the game, but watch out. As obvious as it might seem, the worst thing that can happen besides picking up the green bell is dying, just because you become a sitting duck at the default speed and need to count on sheer luck to get back on your knees. Perhaps that changes when playing in co-op, which brings us to the main reason why TwinBee was originally so successful. In co-op play partners can push each other in order to create a spread shot, as well as hold hands to shoot a powerful fireball. To my knowledge this was a first for arcade shooters.

Besides being arcade-perfect, the port in this compilation has all the basic options you'd expect from a good console release: autosave, autofire, configurable inputs and game/screen resolution tweaks, as well as a music gallery. SELECT adds a credit, and during the game START is used to call the options menu. Just note that the default/starting difficulty is Easy. In the picture below I managed to loop the game and reach stage 16 (4-1) on Medium/Normal. There are no credits whatsoever when the game loops, in a neverending sequence of asymmetrical levels and enemy formations. 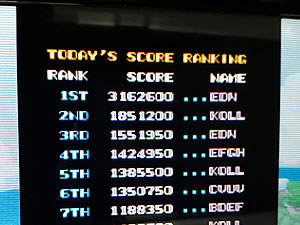 The next chapter in the arcade series is Detana!! TwinBee, which came out six years after this first installment.
Posted by Edward at 1:24 PM