Dear readers, allow me to start this essay by saying that I know absolutely nothing about the Mobile Suit Gundam universe. I don't know how the multitude of sequels and spin-offs connect, let alone the intricate chronology that goes back and forth from one chapter to the next. What struck me even more is the fact that this particular anime is probably the most adapted ever in the form of video games, a personal knowledge gap that's probably related to the fact that most of these games never leave Japan, in the old days at least.

While only one true shmup based on the franchise exists (SD Gundam Neo Battling, released for the arcades in 1992), some other adaptations still warrant a few mentions in any shmup talk since they have a mix of shmup and platforming, as is the case with SD Gundam - V Sakusen Shidou for the Super Famicom. For a long while I thought this little game was the fifth in a completely obscure series, but that's not the case (Japanese terms can be a mess for us Westerners). The subtitle actually translates to something like Project V Start or Operation V Start (V for victory) and mirrors a particular event in the ridiculously detailed Mobile Suit Gundam storyline. In addition to that, SD is a short for Super Deformed, a variation that uses largely modified and anthropomorphic mecha designs based on the original Gundam franchise.

Long story short: unless you're a diehard fan of the anime there's absolutely no point in trying to understand the meaning behind the title or the game's story. Suffice it to say we're actually talking about the first in a limited series of two shmup hybrids released for the Super Famicom, the other one being SD Gundam 2. 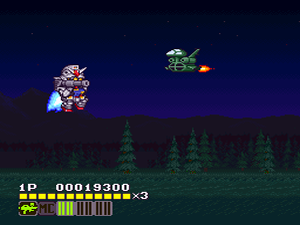 Players control the RX-78 Gundam unit, a short, plump, big-headed cute robot that must battle other plump robots and their minions across seven stages that mix shooting and platforming sections, both of the autoscrolling kind; if a co-op credit is started both mechas are differentiated by their chest hulls, blue for player 1 and red for player 2. Platform inputs consist of B for shot, A for jump (press again for a double jump), R/L for upgrade selection and Y for upgrade/power-up activation. The shooting parts use the same inputs, but button A is then responsible for turning the character left/right. Finally, the mecha performs a saber melee attack automatically if the shot button is pressed when you are close enough to an enemy.

I'll be the first to admit there's an odd sense of charm in a game starring child-like chubby robots, and even though it doesn't shine in any technical aspect the soundtrack is kinda catchy with its alternation of light and darker themes. However, playing SD Gundam soon proves that any good first impressions couldn't be more far from the truth. The gameplay is slow and clunky, the resources are hard to manage, the AI is bastardly cheap most of the time and the mild inertia in the shooting parts is totally uncalled for. The game falls short is about every attribute that matters, failing to offer any sense of excitement or a single truly engaging moment. Of course one can always adapt to the rules imposed by the gameplay, but to my liking the price of admission is a bit too dire.

Take the upgrade scheme, for instance. There's an upgrade bar that fills up automatically with time. When one of the slots is full you can activate its function with the Y button, thus being able to use a laser rifle (16 shots), increase speed (5 steps), activate a shield to withstand more damage (3 levels, the last being a 15 second invincibility window), bear a mace, use a rocket launcher/bazooka (8 shots) or slow down time for a few seconds (a resource that's only available in the final level and only works on regular enemies, not bosses). The further to the right an upgrade is the longer it will take for the bar to reload for another use, so it's no wonder the most powerful weapon in the game is the bazooka. Thankfully the laser rifle is able to supply the basic weaponry and can always be recharged in due time if you don't spend all of its 16 shots too quickly.

Harnessing the benefits of the double jump is essential during the platforming parts, as well as devising a strategy to make the best out of the invincibility provided by a level 3 shield. Just remember that when the invincibility window is over you need to upgrade the shield again from scratch. In any case, preserving health for boss fights is the most important strategy to have in the game. The only single pick-up available, a green item that staggers across the screen every once in a while, recovers five energy cells but comes with a little evil twist: it will be immediately destroyed when shot at. This just reinforces the idea that SD Gundam isn't a game for trigger-happy players, and that memorization is the only real way to increase your chances to survive longer.

Memorization, you say? Be my guest in trying to come up with strategies to handle bosses without taking damage. With a few exceptions, they're all very erratic and bound on a holy mission to bleed you dry, taking away your lives in a snap (note that receiving too much damage can destroy your current shield and send a level 3 in reserve back to level 1). Another annoying thing that might happen is running out of ammo and returning to the pea shooter in the heat of the battle against any enemy. By the way, if you value survival above anything else many of them are better off avoided instead of engaged. You lose a few points but in the end that's irrelevant because every life in stock is converted into 700.000 points upon game completion, which is much more than you can amass during the whole credit. The first extend is registered with 10.000 points, all others at the hundred thousand marks.

SD Gundam also comes with a Versus mode where players can battle each other or against the computer. There are seven robots available and options to fight in platforming fashion (Earth) or in a free-roaming shmup style (outer space). My only stance about Versus mode is that the fighting mechanics are abysmal, and in general even worse than what you get in the main game. So much for cute robots, unfortunately! That said, if you're still game for other 16-bit experiences with big-headed cute characters my recommendations would be Ghostbusters on the Mega Drive (platforming) and Air Zonk on the PC Engine (shmup).

I have no qualms about the crappy 1CC score I was able to achieve on my last life, as shown in the picture below. The game is just so annoying I didn't bother to try again. There are distinct animations for the ending depending on how fast you're able to dispatch the final boss, but no direct impact on the final score. Based on what I've seen so far, I don't have high expectations for the sequel but nevertheless I'll try to make it my next SNES challenge. 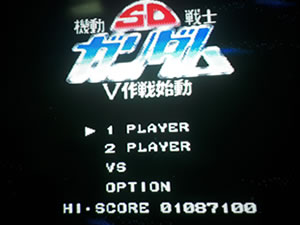