Ah, comebacks... Aren't they sweet? I still remember when I first fired up Gunbird on the Sega Saturn, one of the first shooters I got for the system, and how I hammered the game with a slew of continues until I was able to get to the end of the first loop. By that time I was just starting to learn what a 1CC is, therefore Gunbird was also one of the first 1CCs I achieved ever since I got back to gaming in my adult life. A few years down the road certainly made me a little more experienced with the genre, so this time I took the chance to play the game in TATE.

Wow, has it been that long already? I mean, those days when I thought I wouldn't miss much by playing vertical arcade games in YOKO...

Story summary: a magic mirror was stolen and broken by a giant Gremlin creature, and five anime-styled characters take flight in a mission to recover the pieces of the mirror and defeat the evil enemy and his henchmen. The extra intro in this version shows this (it's not present in the arcade original), and dialogue intermissions tell the rest of the story as it unfolds. Most of the interactions between characters are awkwardly comical, but since they're all in Japanese it's impossible for me to understand what the pedophile (Ash) or the homosexual elderly (Tetsu) are actually babbling about. If you don't care about these bits of dialogue don't worry, they're instantly skippable.

My objective while playing Gunbird again was to top my high score with Yuan-Nang, the monkey-girl who controls a floating cloud. I'll describe how gameplay works with her, the rest of the characters have similar control inputs: by default, you can shoot (C/R), use a charge shot (A) and bomb (B). Yuan-Nang's main attack is a straight green shot with slower side swords, her charge attack is a short range blow with a bo stick and her bomb consists of several shadows of her own self that get propelled forward and also help to nullify bullets. Yuan-Nang's bomb isn't really good for panic defense, since a few enemy shots can get through the appearing shadows (moving while bombing can also lead to deaths because it might create further gaps within the bomb pattern). Even though she isn't the most powerful character in the game, her biggest advantage in my opinion is the short recovery time of her charge shot, whose power is only surpassed by Valnus's electrified discharge (on top of that, Nang's charge shot can also block bullets!). I'm also fond of her speed, which is close to Marion's - not as slow as Tetsu's, but not as fast as Ash's either.

For such a naive control scheme, the amount of strategy you need to apply in order to survive is considerable. Power-up capsules (P) and extra bombs (B) appear from carriers and selected enemies or boss parts. Three Ps are needed to max out the character's strength, but after a while firepower is degraded one level and you need to acquire a new P to get full power again. Every power-up collected while at full power is converted into 2.000 points, and that's the main source of scoring besides milking cannon fodder from boss fights before they time out. It's always good to let power-ups bounce around before taking them at the correct time in order to always get 2.000 points from every P, just remember that all items eventually leave the screen if they're left floating around for a long time. As for bombs, six is the highest number of them you can carry, so any extra bomb taken after that also results in a bonus of 2.000 points.

Rank is intimately related with strategy in Gunbird, because the longer you survive the harder the game gets. That means faster and denser enemy bullets/patterns. The first three stages are always randomly selected out of four (one is always left out), and then you go through the final four in a fixed order. Due to the random nature of the first half of the game, any of the initial stages might come with three different difficulties. The hardest third level in my opinion is the train stage, I'd much rather have the castle or the forest instead of the train. The factory as a third stage is also tricky because the first phase of the boss comes with very claustrophobic overlapping patterns. In any case, you pretty much need to learn how to handle every starting stage in three different ways. Getting rammed by an enemy doesn't result in death, but one power-up will be expelled from the character's body and instantly drift away. Rank is slightly reduced when this happens, but it's not such an advantage as in, let's say, what you get in Sengoku Blade. Significant rank drops only take place when you die. 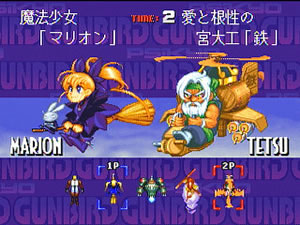 Gunbird's graphics are decent, and if the boss animations aren't on par with Psikyo's own contemporary Strikers 1945 they aren't shabby either. The action is reasonably intense and there's never any slowdown, so aggressive players will be more comfortable with the overall style of the game (well, I’m being redundant here, we all know that’s the harsh truth about all Psikyo shooters). There's only one extend to be taken at 400.000 points, and every continue from stage 4 onwards sends the player back to the start of the stage instead of resuming play right away. Continues used are added to the score in order to separate 1-credit achievements from credit feeding results (note that these inflated values are still logged into the high score table).

The Saturn port comes with save functionality and the extra intro I mentioned above, but this intro is only shown in Original mode - which corresponds to YOKO with vertical wobbling. Excluding the ending sequences, all voices created for the dialogues in the port are also exclusive to this mode, and you won’t hear them if you play the game in Arcade mode (TATE) - which by all means is an exact rendition of the arcade original with regular attract animation and no voice work. Slightly rearranged music is the same for both modes, but high scores are tracked separately. Other goodies on the disc consist of sections for character index and a few art galleries. Compared to the Japanese Playstation version, the Saturn one wins due to the save functionality and the presence of a TATE option. Note: Gunbird was never released for the Sega Saturn outside of Japan.

Here’s my new high score with Yuan-Nang (+10%), playing on Normal (difficulty 5) in Arcade mode (TATE). As expected, I couldn’t survive the onslaught of stage 2-1. 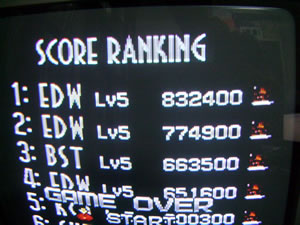