No matter how famous and admired the games from the classic Raiden franchise were in the world of arcade shmupping, many people were also critical about the slow speed of their ships and the way it affected their whole perception of challenge. Perhaps in order to address this, a couple of years after Raiden DX came out developer Seibu Kaihatsu decided to shake things up by releasing a spin-off title that boosted the action considerably while retaining the general feel of their quintessencial formula. And so a new series was born with Raiden Fighters, a shooter that for all purposes is like a regular Raiden game, only on steroids.

Raiden Fighters appears on the Xbox 360 library alongside its sequels in the Raiden Fighters Aces compilation, which saw release both in Japan and the US. It's a mandatory item on its own, but the Japanese disc is the best option if you need to choose one simply because it also comes with a special DVD that contains superplays for all three games. The interface is all in English, which is great, and includes a plethora of visual tweaks (TATE obviously included), local/online leaderboards and the ability to record your own runs. Speaking of the first Raiden Fighters, you can even change its name to Gun Dogs, which was actually the game's working title before the developer decided for a change prior to the arcade release.

That said, I must confess my history with Raiden Fighters isn't beautiful at all. Upon first contact I hated the game with a passion, a reaction that's quite common once you realize how unfriendly it is to unaware players who enjoy the scoring aspect of a shoot'em up. The entry ticket to the scoring techniques in this game is just too high, hence the reason for my giving up on it several times. Long story short, it took me a great deal of resolve to finally get serious about clearing it.

On the surface Raiden Fighters isn't any different from its classic roots. Choose one of the available fighter crafts and face seven stages of pure, relentless shooting action. Each fighter has defined characteristics for attack, defense and speed, as well as specific firepower variations according to the L or M icons you'll be picking up along the way. Controls consist of shot, bomb and rapid shot, fully configurable as you see fit in your joystick, as well as other more uncommon inputs such as rapid bomb (why?) and quick restart (very useful). Quick, in fact, is the middle name of the game here, since loading times are pretty much non-existent and you'll certainly be restarting a lot when trying to score.

Keeping with the tradition set forth by Raiden DX, this game is full of unintuitive secrets that range from trivial to extremely tricky to pull off. Some of the trivial ones relate to the selection of special ships and stage order, but fortunately the Xbox 360 port makes things easier by having (almost) all ships at the start screen and allowing you to choose a stage order before the credit is even started. This way you can define the order for stages 1 (forest) and 2 (airfield), as well as 4 (arctic zone) and 5 (railyard). Stages 3 (ocean), 6 (thunderstorm) and 7 (fortress) will always be fixed since they are actually the main goal of each one of the three missions you must complete in order to defeat the military forces of an evil dictator. This military motif, by the way, is the main design change from classic Raiden titles, which used to propel you to outer space in the second half of the game.

Graphics are crisp and extremely colorful, with an enemy gallery that encompasses all sorts of terrestrial and aerial opposition. Tanks and ships of all shapes and sizes, sniping turrets in every possible configuration, slow moving bombers, kamikaze plane formations and furious bosses with multiple forms/patterns. The music, on the other hand, is a collection of accelerated techno tracks that in my opinion severely undermines the game's appreciation. One might argue the soundtrack matches the pace of the action, but most of the time it just comes off as grating noise that evokes continuous desperation. The song in the railyard level is kinda nice towards the end, but that's it.

Playing Raiden Fighters as you would any other shmup is fun, but quite challenging. Shoot, dodge, bomb, pick up items along the way, fire charged attacks by holding and releasing shot when the ship glows. Survival play is as simple as that, but once you dig a little deeper into how to score better the game becomes a completely different kind of beast, and that's where secrets start to become important. In a nutshell, you won't get anywhere unless you learn how to boost the value of those tiny little medals. In order to do that players must follow very strict rules and routes. It's totally useless to try to figure out these rules on your own, even if you have a lifetime to spend. The best advice I can give is sit back, relax, choose a proper superplay to watch and read this awesome webpage with great attention.

The first rule to increase medal point value is that each medal must be collected before the next one appears. If you don't do that all subsequent medals on screen will have the same value as the first one. That said, a short recipe to proceed is this: increase medal value from 10 to at least 80, then grab the S icon to summon a slave (an option craft that flies beside the main fighter); increase medal value from 100 to 900, then grab a second S so that you have two slaves; without letting any slave die (they die from taking too much damage), increase medal value from 1.000 to 10.000; at this point all medals will be large and of a golden color; in order to break the 10.000 barrier you must have 10 medals on screen at the same time, which will then cause a big explosion and activate the final medal scale, which goes from 10.000 to 100.000; afterwards all medals will be worth 100.000 points provided you don't lose any of them with no other medal on screen, a situation that resets their value to 10.000 points and requires you to increase them back up again to 100.000 (with each medal reset at least 450.000 points are lost).

Aside from keeping both slaves alive halfway the process above, the trickiest part is to get ten 10K medals at once for the break explosion. The easiest way to do that is by uncovering a miclus. Some micluses will only appear if you fulfill certain actions, but luckily most of them will come out just by hovering at specific spots. With a miclus uncovered, shoot it and watch as the required shower of medals fills up the screen (micluses are also worth 100.000 points). The side effect of unlocking high medal values is that once you do that the game's difficulty skyrockets, with bullets coming twice as faster at you. The good news is that deaths don't affect medal values and considerably decrease the ongoing rank. The bad news is that Raiden Fighters has no extends at all. 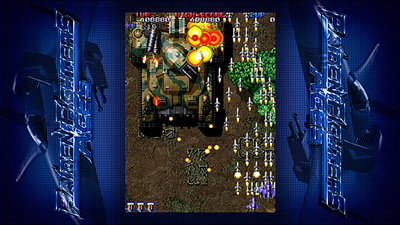 Even though medal chaining is the most important aspect of scoring, there are lots of other ways to score higher. One of them is uncovering fairies. Besides being worth 100.000 points each (if you don't kill them), almost all of them will hand out an extra bomb. Other bonuses can be gained by bullet grazing/scratching, speed killing medium-sized enemies, destroying two parts of them within one second from each other and even "defending" certain parts of the scenario (the houses close to the boss in the forest stage). No matter how well you have planned your routes – and you definitely need to plan ahead – there's always room to uncover a new secret or to squeeze a few more points from the game.

As if all those secrets weren't enough of a hassle to learn, different ships will certainly require distinct approaches to uncovering them. All original default fighters have specific attacks for Missile and Laser, but the ones originated in previous games behave differently. The Raiden mk-II (from Raiden II) and the Judge Spear (from Viper Phase 1) have only one firing pattern, no charge shots and drop their original bombs instead of the new firestar shrapnel bomb. They also start with three bombs in stock instead of two. There's also the extra Slave ship that can be selected by pressing shot + bomb over the fighter craft whose speed and color you want to inherit. Slaves are great because of their reduced hitbox, but they have only one firing pattern and no charge shot whatsoever.

The main game mode in Raiden Fighters is Arcade, which also comes with a Boss Rush variation for those interested. In Score Attack mode you have 100 seconds to achieve the highest score possible with no medals and different places for secrets. Finally, in Training mode players can adjust every aspect of a run in order to practice individual stages. It's a very helpful and flexible tool if you can't resource to emulation for training. I used it extensively to get better at the final levels.

I chose to beat Arcade mode with the Aegis fighter, and accomplished my mission in Arcade difficulty with the final result shown below (note that Normal doesn't match the original arcade difficulty). It was a tough but very fulfilling ride, one that helped me lift my grudge against the game. Now let's see how long it will take me to man up towards the sequel! 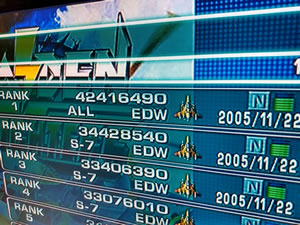