Fondly remembered by fans of the Amiga computer system, Xenon 2 Megablast was quite popular and successful at the time of its release, and soon became available for a few others systems such as the Master System. This 8-bit port actually came out at the tail end of the console's lifespan and roughly a year before the Mega Drive version, and much like its 16-bit counterpart was published exclusively in Europe. My copy is the second one by Virgin Games (a first release by Image Works came out the year before).
Having played the Mega Drive game a few years ago, I never nurtured any particularly good expectation for the Master System conversion. I did believe however that it would fit the console’s capabilities better than it did the Mega Drive’s, provided the porting job was at least decent. Unfortunately even trying out the game proved to be quite difficult since it showed graphical glitches that made it unplayable on any regular 60 Hz Master System console from other regions other than Europe.
Then a few weeks ago I plugged the cartridge on my Japanese Mega Drive with a non-official adapter and bang, the Master System version of Xenon 2 Megablast was finally free of glitches. The time came to venture into a brand new adventure in torture! Even though I could say this particular port shares the same sorry fate of the original with regards to its terrible ageing, it's also important to consider the fact that the development team clearly tried to achieve more than Sega's baby console could handle. 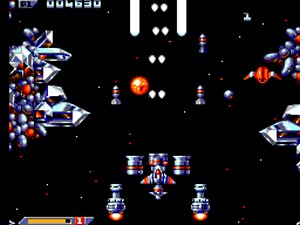 The impending dangers of the volcano area
Xenon 2 Megablast boasts six slow-moving levels with otherworldly environments and one single song that plays from start to finish, a rearranged take on a music by Bomb the Bass named "Megablast". Although interesting on its own, I’d rather have a few more songs and variety on my soundtrack. At least players can turn off the music before starting the credit if desired, replacing it with some other live soundtrack to go with the game and its subpar sound effects.
Both buttons are used to fire, and the scrolling direction can be reversed by forcing the ship against the bottom of the screen. This is necessary whenever you reach dead ends, and proves inevitable during the maze-like corridors of the fourth stage. Each life comes with an energy gauge that allows the player to withstand some damage before dying. Losing energy happens whenever you get hit or touch enemies and walls, so do your best to memorize the movement patterns of enemy waves and to not get stuck in unsuspected corners. Lives are lost in a snap if you get sloppy, so it's always best to be cautious rather than hasty.
Power-ups can be acquired either by shooting at item containers that cross the screen from time to time or after the stage is over by purchasing them in the shop. Once inside the shop you're first given the option to sell your current items to Colin the alien, then you proceed to the buying section. The initial wallet in the shop corresponds to the exact amount of points achieved in the current level (a simplification from the original game, where bubbles supplied money independently from your score). The game balance around cash is really tight, so try to spend it wisely until the very last cent, after all you can't carry money over from one stage to the next.
One of the few positive aspects about this port is that it can be considered graphically quite faithful to its source, even including a single background layer for proper parallax effect. But that's where the positives end, unfortunately. As the stages progress it becomes clear that the game sliced the original levels in order to extend the stage count to six, yet it doesn't even include all scenes seen in the already butchered Mega Drive port. There are no mid-bosses and only two recurring main bosses appear, the nautilus in the odd levels and the crab in the even levels. My general impression of the game is even more dire than those I got from the Mega Drive version: it still feels like navigating through mud at the mercy of erratic enemies, but their attacks inexplicably do not obey frame rate limitations like your sluggish ship does. The result is that you might be bombarded with bullets you can barely see coming, so be ready for another painful exercise in frustration and patience.
A brief section of the first stage in Xenon 2 Megablast for the Master System
(courtesy of YouTube user The VideoGames Museum)
My strategy for power-ups was to get side shot, autofire and the last power-up on the first shop, then on further opportunities acquire laser and spend the rest of the money on health refills and whatever I still missed of side shot and autofire. Some of the upgrades can be bought more than once, which means they have more than one level of power/efficiency. I didn't bother purchasing double shot, cannon or the useless super Nashwan power, which lasts for ten seconds only at the start of the level and isn't really that "super" once you realize how much more potent a laser-equipped spaceship is. Make no mistake though, no matter how powered up you are you'll never really feel comfortable to tackle the enemy swarms in the last couple of levels. Memorization and clever positioning are still the best strategy you can come up with in order to succeed in Xenon 2 Megablast for the Master System.
All things considered, including the atrocious frame rate which drops to a crawl whenever the screen gets too cluttered, the game does offer a challenge that's tightly tuned around its design choices. Some of the special items to be purchased in the shop serve as examples: extra lives are so expensive that in certain levels you won't even get enough money to buy one. Since there aren't any score-based extends, unless you sacrifice precious firepower along the way you'll pretty much have only three lives to complete the game no matter what. At least the appearance and consequent opportunities to use the zapper smart bomb seem to be more reasonable this time around.
Beating the top spot in the high score table requires you to at least loop the game and advance a few more levels. Once I did it I was able to reach the 6th stage again (level 2-6) before dying my last life. There's no increase in difficulty on the second round, it's the same endurance test all over again. 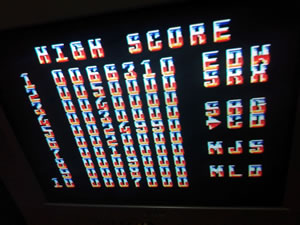