I'm not used to categorizing games based on broad labels that don't really add anything useful to a discussion, but it's hard not to come up with the term euroshmup when talking about Space Blaze. Sure it was developed in Europe, but that doesn't mean anything. What does stand out in this game is some well known derogatory features associated with the term, of which the most relevant are the adoption of a life bar, simplistic level designs and extremely unbalanced gameplay.
Space Blaze is a bare bones shooter with seven stages and pretty much nothing else to help it linger longer than the absolute necessary in the memory of shmup fans. It's your classic methodical sci-fi romp that goes from point A to point B while trying to adhere to the basic rules of the genre, which means you'll come across lots of enemies, power-ups and a big boss at the end of each level. Graphics tend to be quite dark and range from average to extremely well done, especially when some sleek lighting effects are applied on weapons and enemies. It looks decent and sounds decent (enough), but it's unfortunately bound to disappoint even the most eager admirer of outer space shooters. 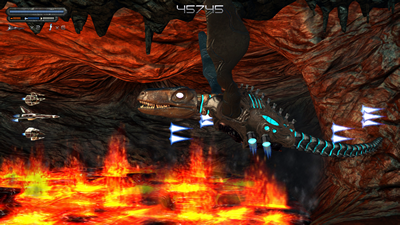 A dinosaur boss inside fiery caves
The world of Space Blaze isn't much complicated for the brave pilots (co-op play available) who accept the mission to destroy another evil alien menace. Below the health bar there are three sections that show the firepower level of each weapon in the game: red (spread vulcan), blue (straight laser shot) and green/white (multidirectional shot). Red is the default, the others must be activated by collecting at least one colored power-up item. Shooting is achieved with button × or □, and cycling through the available weapons is performed with L1 and R1. The special attack (or superweapon) is triggered with button ∆ or ○ and depends on which weapon you're using, resulting in a powerful homing projectile burst (red), a piercing laser beam (blue) or a quick and thick arching blast (green).
Besides icons for power-ups there are also items for options, temporary invincibility shield, energy recovery (P) and superweapon (adds one special attack to the stock). These items are small and dark-colored, but since they're all benign you can take all of them without hesitation. However, there's absolutely no need to worry about them after stage 2, and this happens for a very simple reason: they just stop coming. It's as if the developer simply forgot about them or sadistically decided to deny the player the ability to recover any energy or activate new options after dying. It's not just that though, in fact it gets worse.
Stages 1 and 2 can be learned quickly, never mind the creepy but stupid bosses who barely have a chance to shoot back. After that something's completely off with the gameplay. Once the ship starts descending over a rocky planet, all incoming items will be of the green weapon only. Every single one of them. This sequence is broken in stage 6 when they get swappped for the blue weapon, but green is once again the single item to be found in the final level. This means that from stage 3 onwards players never get the chance to upgrade vulcan again! This imposes a great deal of difficulty because red is definitely the best weapon for crowd control when maxed out. Since deaths take away two power levels of all weapons, a single death makes a severe dent in firepower, leaving you in dire straits against hordes of mindless drones.
Dying during boss fights is particularly punishing since you might soon be back to the default pea shot with extremely capped firing ratio. Earning one extra life per level won't help unless you can endure excruciatingly long and painful boss battles. Another minor hindrance is the fact that in the beginning of every level the game gives you three special attacks regardless of how many you had previously, which is good for restocking but quite bad from stage 2 to stage 3 since it strips you away of the cumulated six. The thing is that special attacks are extremely useful to wear down bosses faster, so holding on to them no matter how badly you have to perform during the level is extremely important in the second half of the game (lives and superweapons are independent from each other as far as their stock goes).
Official trailer for Space Blaze
(courtesy of YouTube user Games Asylum Trailers)
Despite the shortcomings in the botched gameplay, it's still possible to beat Space Blaze on a single credit with a little stubborn practice. Keeping a maxed out vulcan shot is the best way to proceed safely once the game shows its final euroshmupping facet by stage 4 and starts throwing everything but the kitchen sink at you amidst a beautiful blueish underwater landscape. All of that while giving you only green power-ups. Note that when you pick up a weapon item the ship starts firing it at once, so if you want to keep using a different type of weapon you need to constantly re-select it while collecting power-ups. Since each power-up in excess is worth 5.000 points, score-hungry players will often get out of their way to pick them up. When doing that beware of the large hitbox of the ship and the constant obstacles scrolling by on the foreground, which often hide spikes and unsuspected deadly corners.
If I were to pick something good out of Space Blaze I'd say it's stage 7, just because it actually seems to have been thought out a little better in terms of level design, scrolling everywhere instead of just going to the right. Too bad it comes up too late. As a whole this game is proof that nice graphics aren't enough to make a simple, balanced and fun horizontal shmup. The utter disregard for even the most rudimentary balancing in the programming department is quite baffling to say the least. And what's the point of having your score resumed and increased even when coming back and continuing after the console has been turned off? Why have any sort of leaderboard for this, I wonder?
Anyways, the only way to play the game with a clean slate after you've practiced and continued is to do it after deleting the game's save file, which I did before getting the 1CC score shown below.