I've never had much contact with the titles released by Camerica for the NES. The company has a special history with the platform because it only published unlicensed games developed by Codemasters, which is of course known for many other video game related endeavors such as the Game Genie. I now wonder if I should've started my journey through Codemasters shmups with a different game since F-16 Renegade is a lot like Mig-29 - Soviet Fighter, which was released at least a couple of years earlier and also seems to be the better choice from both.
Anyway, F-16 Renegade is one of the four games included in the Quattro Arcade compilation, the others being one racer and two platformers. It's a uniform mix of vertical and rail shooting stages where the main character is a young pilot fighting to defeat his crazy professor, who has hacked into the US Air Force's computers and programmed all of the jets to fly off and start World War III. Yes, the story is ambitious and told in fine details in the instruction manual, in what's clearly a very nice effort for an unlicensed title. Unfortunately the same compliment can't be made about the game itself.
Trying out F-16 Renegade for the first time
(courtesy of YouTube user DarkMurdoc666)
Once F-16 Renegade is selected from the initial menu and a credit is started you can't help but feel something's really off. First of all, that music you hear in the attract mode is gone, and all that's left to accompany the pilot in battle during the whole game are sound effects. Then you realize you have to cope with inertia, which makes moving and dodging a real pain until you get used to it. And once you start to try out the inputs (A for shot, B for bomb) it's impossible not to get annoyed by how unresponsive they are. Waiting until the enemy is ahead of you to shoot can be fatal, so just hold that button for whatever rate of fire you can get. And yes, bombing can be equally unresponsive.
Stage symmetry is guaranteed from beginning to end, meaning that odd-numbered levels are vertical and even-numbered levels unfold in rail shooting fashion, complete with a brief take-off animation that poorly emulates After Burner. The general approach to each type of level is of course quite different from each other, but the upgrade items appear in both. Besides P for power-up you'll also come across S for (smart) bomb and L for extra life. It takes five Ps to achieve maximum power, and both bomb and life stocks extend beyond the nine you're able to see if you manage to collect too many of them.
Due to the stage count and the rather repetitive nature of the game, F-16 Renegade certainly feels like a marathon. Graphics are quite simple throughout with drab colors and not so much variation in backgrounds, and the gallery of sound effects clearly tries to compensate for the lack of music. Everything comes together in an underwhelming and mostly forgettable experience, but at least the game presents a fairly steady progression for firepower upgrades and overall difficulty. This is sort of mirrored by stage names that categorize your performance from "rookie" in the first stage to "untouchable" in the final missions. 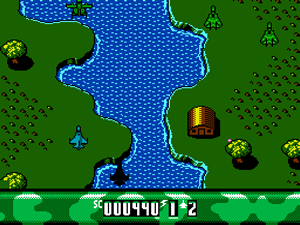 A natural evolution to River Raid, perhaps?
Each power-up improves the jet's offensive capability by a good amount either by providing more spread or more immediate power, and every time you die only one power level is lost. The game increases the challenge marginally in every stage by adding new enemy formations or by making boss patterns just a little more menacing. The only exception to this rule are rail shooter bosses, which behave practically the same from start to finish. On the other hand, those heat-seeking bullets in rail shooting areas do demand more careful maneuvering than the regular circular movement this type of game normally requires.
On vertical sections covering the whole screen can be a tad hard especially when ground turrets start firing lots of those guided missiles. They're often the reason why players get cornered and die. There's a catch to make the game easier though: the only enemies that will release upgrade items are those of the blue color. Destroying all enemies in a blue wave or a single ground blue target will always result in the appearance of an item (this information is also in the instruction manual, but who actually reads them?). As a result, you'll always acquire a decent amount of resources to complete the game if you get out of your way for blue enemies. A few further notes on upgrades: the blue enemy rule for power-ups is also valid for rail shooting areas; whenever your firepower is maxed out a P will give an extra bomb instead; bomb stock is independent of life stock, so you don't need to worry about losing all your bomb inventory when dying.
Only when I figured out that blue enemies should be my favorite target I was able to achieve the 1CC, as seen in the high score table shown below. The addition of a 2-player competitive mode in F-16 Renegade is an interesting albeit feeble twist, at least going by what's described in the instruction manual. 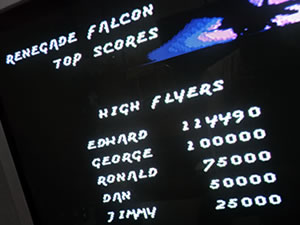