As the direct sequel to one of the most avant-garde shmups ever created, Silpheed - The Lost Planet must have generated high expectations during the first year of the Sony Playstation 2, both in Japan and in the US. In the case of the US version, for instance, it was supposed to come out on the console's launch date. Short delays notwithstanding, the Western disc includes a few nice improvements made by publisher Working Designs over the original Japanese version, namely the elimination of most of the slowdown and the addition of analog controls. Mind you, this is explicitly stated in the game's instruction manual, I haven't been able to try out the Japanese variant.
In the process of designing the game, developer Game Arts brought along the expertise of Treasure, then already quite famous for making Guardian Heroes and Radiant Silvergun. My best bet is that Treasure took care of the spectacle and the design of some of the largest bosses, with the rest of the game still at the hands of Game Arts. Eye candy aside, unfortunately it doesn’t take long to realize that the results of this enterprise aren’t up to the standards set by the original Silpheed, which is kinda baffling considering the powerful resources associated with the Playstation 2 hardware. 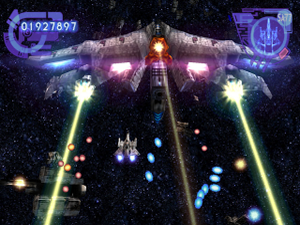 Alone in the galaxy against large enemy battleships
The story of The Lost Planet takes place three decades after the events of Silpheed, and is fully explained by a few animated sequences and several long texts narrated in English prior to each stage. Sci-fi buffs will be marveled at the amount of detail, whereas diehard shmuppers will feel relieved to be able to skip all interludes with relatively short loading times. As for the actual gameplay, what’s left is a very simple game since all you need to use is a single button even though there are three buttons in all configuration layouts. In the default configuration □ and ○ are responsible for shooting each of the side cannons, but there’s absolutely no reason to use any of them considering that button × fires both.
Upon starting a level the pilot has to choose the weapons to be equipped in each cannon. The initial weapon gallery is quite meager, but for every stage completed new weapons are unlocked for immediate selection. Halfway the level you have the chance to replace your choices during the reload cycle, which also refills four energy cells of the ship. Ship energy is arranged in two blocks of five cells, providing an initial health bar that lets you take at least nine hits before dying within the level. And once the next stage starts this health bar is completely replenished. How many shmups allow players to have so many lives, I wonder?
Having such a generous health bar for every stage isn't probably just about making the game more friendly to beginners. It actually factors into the risk associated with playing aggressively for score, which is by far the best thing about Silpheed - The Lost Planet. It lifts the game above the level of mediocrity. In essence, scoring is very simple and is based in proximity kills, which means that the closer you are to your enemy the higher your score over its base value will be. Proximity multipliers range between ×1, ×2, ×4, ×8 and ×16. Since enemies have no health indication at all, practice and good knowledge of their behavior is the best way to achieve those precious ×16 multipliers, especially against mid-bosses, bosses or any instance where you might be able to dismantle them piece by piece.
The only catch when going for proximity kills is that you can't just go on a rampage and sacrifice your health in order to get a ×16 multiplier on a boss, for example. If you get hit all your targets will result in ×1 multipliers for a few seconds no matter how close you are to them. Getting hit or touching the boss just before sending him into oblivion is the worst thing that can happen in every high scoring run.
3rd stage of Silpheed - The Lost Planet
(courtesy of YouTube user BelowAverageJoe)
There are two reasons for why this sequel fails to live up to its heritage. The first of them is the weapon gallery, which is full of gimmicky and useless unlocks from the second level onwards. Once the first stage is over, for example, I'll only use a combination of Optics Laser and Napalm Bomb for the rest of the game. The laser is great to deal with enemies from afar, and napalm is just devastating in close range. A few other weapons might get the job done if you get out of your way to learn how to use them, but I don't think they're worth the effort.
The second reason why the game doesn't reach its full potential is the lack of environment interaction, as aspect for which Silpheed is regarded as one of the best Sega CD games ever made. That feeling of flying across obstacle mazes at varying speeds as if you're chasing the core of a death star is nowhere to be found in The Lost Planet. Truth be told, some of the the 3D backgrounds are impressive and have great textures, but the closer we get to interacting with obstacles is a few buildings slowly collapsing to the ground here and there in the second stage, which by the way drags.
Of course there's nothing essentially wrong about the game. The slanted perspective is still quite charming to look at, and the constant radio chatter seems to have been carried over unaltered from the first game. Although there are no real standouts in the music tracks, they at least get the job done and even evoke parts of the soundtrack of the original Silpheed in a few areas. The huge last boss is also back for a quick rematch prior to the real final boss in The Lost Planet, which is kinda neat, but there are also a few other large bosses that are quite creative in terms of design and attack patterns.
I tried to squeeze what I could from the proximity bonus system and got the best result of position 3 in the picture below. I think it's perfectly possible to top the highest score of 10 million, but for now I'm done... if only I wasn't constantly being stunned by a hit or just standing too far from a few bosses during the kill! 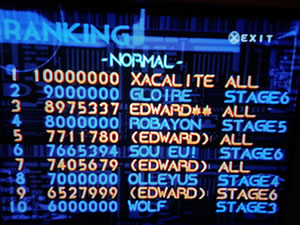