Dear readers, I guess a mea culpa is definitely in order. I don’t recall exactly, but for a long time I’ve had a personal grudge against this game and the exact reason is now blurred in the past, most probably with confusion regarding a perception of having to control a humongous blocky ship in a game that looks like Xevious. It just so happens this is a very wrong assumption, for Terra Cresta isn’t anything of the sort. Nothing better than properly playing a game to see what it’s all about.
Originally released in the arcades in 1985, Terra Cresta appeared in a stand-alone disc for the Playstation 2 as part of the Japanese Oretachi Game Center series, more especifically in volume 10. Direct sequel to the primitive Moon Cresta (which is also found in the same collection by the way), it builds upon the visual ideas of Namco’s Xevious while adding new elements that give it a whole different feel. One of these elements is the music, which despite being restricted to just a single tune is quite charming and obviously prone to get into your head you if you play the game long enough.
In the world of Terra Cresta players must patrol the surface of the planet in an endless quest to defeat alien enemies. The terrain is constantly changing and there’s no stage distinction whatsoever, so progression is mostly determined by the appearance of three progressively harder bosses. Most people consider the game looped when the third and largest one is beaten, and since the minor bosses appear in uneven intervals it’s just common sense to consider Terra Cresta a single-stage shooter. And a rather quick one, it takes roughly less than ten minutes to be completed.
A vintage trailer of the Terra Cresta arcade
(courtesy of YouTube user Fuzzy)
As the game unfolds small electrified hatches will appear surrounded by one or more numbers positioned very close to them. By destroying all these numbers an extra ship part will emerge from the hatches, and by collecting them you'll combine the current ship with these new pieces. Each piece increases the ship's size while improving the shot pattern a little: 2 thickens the main shot, 3 adds a rear shot, 4 adds an extra frontal shot and 5 creates a rear barrier that's able to destroy enemies on contact (just out of curiosity, part number 1 is the default basic "Winger" ship). If you've collected at least one ship part you won't die if a bullet hits you, only the part(s) will be lost. On the other hand, if the player is able to collect all pieces without losing them or dying, the ship will turn into an invincible phoenix for a determined amount of time before reverting back to its regular form.
SELECT adds a credit, START begins one. Shot is permanently mapped to buttons □, △ and ○, with autofire applied to the latter two. A second input provided by button × provides the gimmick that defines Terra Cresta and ultimately makes it memorable. Commonly referred to as "transform", this button splits all extra parts the ship is carrying and makes them fly alongside you for a brief while (the same duration of the phoenix phase), after which the ship/parts will sink back into their original form. During this transformation period the firepower is enhanced (the more parts you have the more powerful you get), and as you move it around the only piece that's vulnerable to attacks is the basic ship itself.
The amount of transform attacks available is dictated by the Ps at the bottom of the screen. Even though you can't transform at will, using this ability gives the game a few additional layers of strategy. On top of being an extremely useful aid during tricky sections, there are certain enemies that can only be destroyed by the extra power you get from a formation attack (those energy bars that descend and split in two at the bottom, the detachable base of the small homing missiles). Besides, considering that each ship part collected adds three new transform cycles to the stock, transforming right before collecting one is a very nice idea if you still have at least one P left. After all, extra firepower is always useful no matter what. 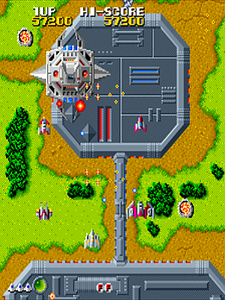 Meet the second boss, guys!
The first loop of Terra Cresta, i.e., until you beat the huge boss that shoots out boomerangs, showcases the whole game in a reasonably approachable manner. Enemy bullets start slow, bullet density isn't that high and hatches with ship parts are evenly spaced out. Once you proceed after that the difficulty starts ramping up nicely, with ground and aerial targets appearing in equal measure. Since the spawning routine of some flying enemies is based on your position in the screen, with practice there comes a point when you'll know where to stand in order to have better survival chances. Sure you can twitch your way through the game, but other than the aimed bullets this is pretty much the main source of randomness there is to the gameplay, which immensely rewards memorization.
Regardless of the loop you're playing, an aspect that can't be taken for granted is the fact that every single extra ship part isn't just there for the taking. There's always a threat nearby that's perfectly positioned to give you trouble if you go straight for the extra piece, be it one of those dinosaurs, a sudden enemy wave coming from the sides or one of those ground turrets that's only revealed when you get close to their location. Scoring is very straightforward, and the little opportunity you get to amass a few more points is by exploiting the minions expelled by bosses. Bosses do time out and leave the screen after a while though. In the case of dragging out the fight against the third boss there comes a point where you won't need to face him again if you die, you just go straight into the second loop once you're revived in the checkpoint. Extends are given at 20.000 points and then for every 60.000 points afterwards.
I admit I had great fun playing the game, much more than I thought I would. There's that one-more-go aura written all over it, which certainly vouches for the success it achieved during its original arcade run. The only gripe I have with the transform mechanic is that I often get confused when transforming with only two ship parts (the one where you get a wide wave shot as the formation attack). And then I die because I start controlling the ship part instead of the ship itself! This doesn't happen with the other formations simply because the parts appear right ahead instead of flying beside you.

Click for the option menus translation for Terra Cresta on the PS2
If you just want to play Terra Cresta the PS2 port has all the essential resources you might need (TATE mode, save feature), but the package also includes an extra guide book, a music mini-CD (16 minutes of sound effects, music tracks and two remixes) and a mini-DVD with a gameplay sample of the first loop of the game and general advertising for the Oretachi Game Center series. A handful of ports were released for the most varied platforms, while the first sequel Terra Cresta II came out for the PC Engine in 1992.
I played in the Normal difficulty and in all the results shown below I died in the second loop. 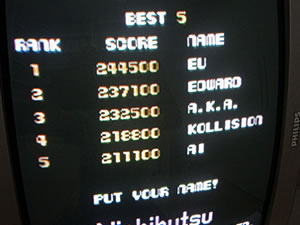