Heh. It's weird that I've been playing so much Psikyo games lately. While my urge to face Sengoku Blade came from a nice shmup competition (check the oldschool Brasil forum), it was a very welcome departure from the Psikyo norm, a company that's notorious for its vertical quick shooters. This game is a direct sequel to Sengoku Ace, which I beat just a month ago on the Playstation 2, and is in every aspect superior to its prequel - starting with the horizontal scrolling and everything it allows aesthetically.

Some of the characters return to this second adventure, the most notable one being Koyori. What will please most male players is how she has grown - her huge boobs sometimes overshadow everything Sengoku Blade is about! Tengai the monk is also back, as well as the samurai Ain, although he's a secret character (to choose him go to the random character selection, press UP 3 times, DOWN 3 times and UP 7 times). New to the scene are the robot samurai Katana, two teenagers (Sho and Junis) and Marion from Psikyo's own Gunbird (playable after you beat the game with all characters, including Ain). She's by far the strongest character and does make you feel as if you're playing Cotton on steroids! 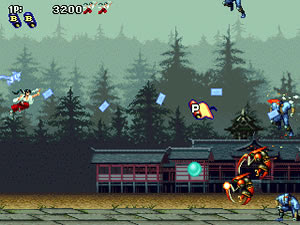 The gameplay hasn't changed much at all. Each character can rapid shoot, charge his/her shot and drop bombs. This time they fly instead of piloting an aircraft, and a minor addition to each one is a familiar/helper that appears and adds to your firepower as soon as you collect the 1st power-up. All characters are very different from each other: Junis has a great charge shot, a fine-looking but weak bomb and an awkward main shot; Katana has the most powerful charge shot (close range only), but his bomb is also weak; Koyori's familiar fires very effective homing bubbles, her charge shot is almost useless and her bomb, despite being very powerful, cannot be used with panic purposes. Released coins this time spin and are valid 2.000 points if you collect them while facing the screen (much like the gold bar scoring scheme in the Strikers 1945 series). The game is still comprised of 3 out of 4 initial stages and 4 additional last stages. However, there's a branch in the 6th stage that allows you to face completely different routes and enemies. It all contributes to deliver a harder experience, one in which the chosen character seems to have far more influence in how you play than in other games.

Sengoku Blade is remarkable for being a very dense shooter with great visuals and gorgeous parallax backgrounds, with Japanese themed music that's much more fitting this time. It's a shame that this is a rarity among Psikyo games, since their only other horizontal shooter I recall now is the awful Sol Divide. It would have been great to see more like it, for every time Psikyo ventured into new grounds it was almost certain they would develop great looking material (another great example is the Zero Gunner series). Allow me to state that the "almost" is there because of Sol Divide, which deserves a special place in shmup hell as one of the worst games ever developed. 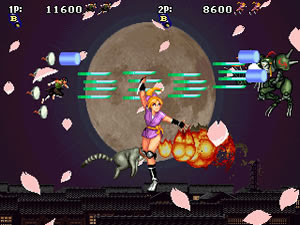 Let me now write something about rank. This particular title did give me some trouble and made me try to find out how to lower rank during the 5th stage while at the same time reaching it without losing any lives. The results of my tests were useless, as even getting there with no power-ups and no bombs does not affect how the bullet swarms engulf you into a painful death. After a while I decided to preserve my firepower/bombs and just bomb my way into the 5th stage against totems and giant hands, trying to last as long as I could. Needless to say I never once got the extend at 600.000 points without first losing a life...

My favorite character is Koyori. And I don't mean it as an eye pleasing preference, but really as a gameplay choice. As I mentioned earlier in this text, her homing bubbles are good for scoring, and the greater challenge comes from making the best use of her bomb stock and deciding when to drop them. Extra hints on scoring: there are secret coins that appear if you "walk" (yes, your character can walk on the ground!) in certain areas; if you kill mid-bosses fast enough extra enemy waves will appear (Katana is great for this); some mid-bosses yield more points when destroyed by parts.

So here it is, my high score with Koyori on difficulty 5 (NORMAL). 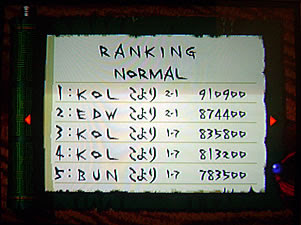