Witches in brooms, crystals and gothic pastel graphics. Why not continue the fun after having beaten the PC Engine CD Cotton game? The next in the series timeline is Cotton 100% (also known as Märchen Adventure Cotton 100%), a revision of the original game specifically designed for the Super Famicom. Some people deem it as a pure rehash, and I admit that a few years ago my evil self would agree with this while thinking "yeah, that's what the SNES deserves, rehashes!". I'm more mature now and my Sega fanboyism is long gone (relapses sometimes allowed), so I can see the qualities of this game and how it actually tries to improve on the mechanics of the title that started it all.

My mission this time was to improve my previous high score (it was more than succesfully accomplished, in a lucky and unforeseen run that practically doubled my achievement - scroll down if you can't wait). 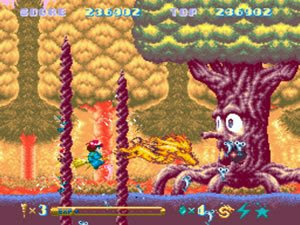 For those familiar with the original Cotton, the SNES game will sound extremely like it. Apart from some new bosses, the stage structure is almost the same. Enemy sprites were redrawn in order to fit the bright design, as opposed to the original dark tone, and have acquired a more harmless, almost childish appearance. With the new graphical capabilities provided by the SNES hardware, Cotton 100% turned out even more colorful, with delightfully beautiful visuals that showcase the best feature Nintendo's 16-bit platform had to offer. The difficulty however was made even easier, and on top of that CONTINUES don't send you back to the beginning of the stage. That's why reaching the end shouldn't take any ounce of sweat from an experienced player.

The best improvement of the SNES game over its predecessor is definitely the mapping of a single button for autofire and a different one for magic. There's also a third button for bomb dropping and another one for magic selection. This time around you don't need to rely so much on crystal power-ups, for they come in only two colors, and they both increase experience for main shot and bombs. The magic arsenal is now replenished by some "?" icons that don't come very often, and was expanded to include fairy fireballs, bubble attacks and a twinkle star shower. It's mandatory to select one out of four 3-spell combinations during the start screen. I still prefer to have the original dragon and lightning spells, since the new ones are awkward and ultimately useless, with the exception of the twinkling stars. You can have up to 3 fairies helping you, they move according to the magic you have selected and can still be thrown forward by charging the bomb button. 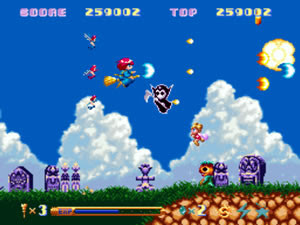 The only extend granted by the score comes with 200.000 points (there are also extends for 50.000 and 100.000 points as well - EDIT 25-OCT-2010), but there are several extra lives hidden in the scenery that show up and move upwards when their area is shot. Everything else in the gameplay is very much the same: some bosses are easier while others were given an extra upgrade in their firepower (namely the last boss). One of the coolest moments comes when you have to face a mirrored mean version of Cotton in the 6th stage. The music is very upbeat, making the whole experience a relaxing fun ride for when you don't want to strive too much to beat a game.

As every Cotton player/fan knows, the tea time end level bonus area will give you a special bonus if you avoid all teacups that come towards you. What I found out this time was that 6 special bonuses is a row will add 375.000 points to your score. I seriously doubt I will do that again so easily! The 3rd stage tea time shower is the most difficult one because there's a big hill in the middle of the screen that reduces it to half its size.

The very special tea time bonus helped me get the highest score shown in the board below. In this run, however, I died facing the last boss... The 2nd place in the board was achieved in a 1CC run. The game was played in NORMAL mode (those units that appear in the score value are the number of times you die). 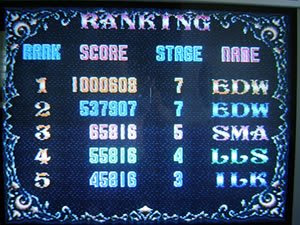