The start of a successful franchise is always something worth of curiosity for those who want to know the roots of most recent games. But can we deem an obscure series like Cho Aniki as being successful? If you consider the whole line-up that came after this starting title, then yes - it's not everyday that you see a shmup get three cross-platform sequels. But then again, we're talking about Cho Aniki. I bet if you've never heard it's the most gay shooter franchise ever...

Back in 1992, Cho Aniki was released for the PC Engine CD with not much of a bang. It was developed by the same people who had done Wings of Wor for the Mega Drive. The similarities definitely show, even though Cho Aniki lacks the polish and difficulty of the shooter previously designed for the Sega platform. What Masaya started and further developed with it was a very distinct set of shmups starring a group of non-orthodox characters, namely the semi-nude bodybuilders who shoot beams from holes in their heads in an increasingly gay setting. Since Cho Aniki was the first game, much of the edgier stuff isn't yet present, and the famous bodybuilders have just a supporting role within the story. 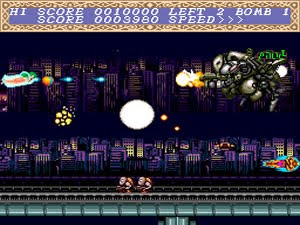 You can select one of two characters to fight the crazy evil creatures. There's Idaten the guy and Benten the girl. The only thing they have in common is the main shot. Idaten can select up to 8 different speeds, while Benten has only 4. His charge shot is the glowing beam, and hers is a series of 45º green shards. The charge shot is fired whenever the main shot button is released, which is by far the coolest aspect of the gameplay. When the players have options, these also fire the glowing beams, providing for a massive amount of firepower. The power-up icons are released by special enemies (proteins for "build-up", not "power-up"), but the options appear randomly and can be one of the 2 bodybuilders Adam or Samson, a baby angel or a blue alien (!). They can be used in two ways: hovering by the side of the characters or performing their particular kamikaze attacks. To toggle between these two modes it's necessary to press the bomb button while firing. This means that to actually bomb you must stop shooting. I found the kamikaze attack to be a waste, so I pretty much left my options in side formation all the time. And I preferred to play with the guy, because the girl's charge shot is weak and makes it difficult to overtake the swarms that appear later on.

If the options take too much damage they will die, but soon enough others will come by. The problem is that once you've got used to the shot/charge mechanics and how to properly employ the options, the game becomes too easy. This hurts Cho Aniki's overall replay value, even if the gameplay is spot on with plenty of action and bosses. Each stage has nothing less than 3 mid-bosses and 1 main boss, intertwined with brief bursts of the most varied enemies you can imagine. The music adds to the weirdness in that it's sometimes uplifting and sometimes just plain offbeat. 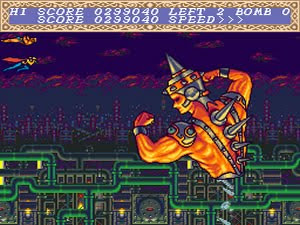 Graphically, Cho Aniki boasts very good sprite work and nice parallax effects, with absolutely no trace of flicker or slowdown. It's extremely colorful and, though wacky and generally unique, stage and enemy design isn't as homossexually creepy as the sequels would turn out to be (gay poses are reserved for the cut scenes only). It's a perfectly fit game for a fast and easy session, since even in the HARD setting it's still pretty manageable.

In the 1CC run below I got relaxed and lost 2 lives in the last stage (NORMAL). There are instances where you get extra bombs from defeated enemies, but there is absolutely no way to get extra lives. However, I believe 3 attempts are more than enough for anybody to breeze through it to the end. 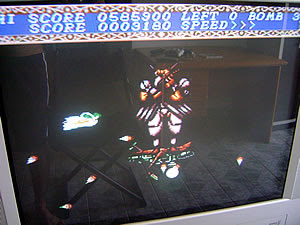 Next chapter in the series: Ai Cho Aniki.
Posted by Edward at 10:50 PM