Video System would become famous in the arcade scene with the Sonic Wings series, but their first game ever released was a bunny starred horizontal shooter named Rabio Lepus, also known as Rabbit Punch in the west. This game is an oddball early example of a cute'em up, and it would only get a straight port through the PS2 Oretachi Game Center series almost 20 years after its debut (the existing PC Engine version is a different game altogether). The fact that Rabio Lepus is now outdated by all standards doesn't take away the importance it had in the style of future Video System games, or the old shool challenge it is certainly able to unleash upon unknowingly naive players.

The main characters are two robotic red/green bunnies, which depart on a mission to rescue three kidnapped members of the Bunnyland royal family: the king, the princess and another playmate dressed girl. The bunnies must travel through 12 increasingly harder stages that take place on a spaceship, a floating asteroid and the enemy's planet. All levels have bosses, but every 4th stage will house only a single more powerful boss that holds one of the kidnapped hostages captive. 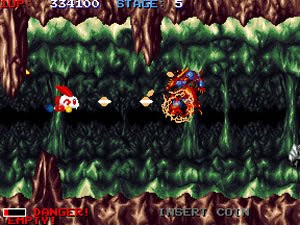 In order to fulfill the mission, each bunny is equipped with a single pea shooter and a limited stock of homing missiles acquired from item barrels. There are no power-ups whatsoever. The bunny can also automatically punch enemies if he gets close enough to them. This attack is more powerful than the regular shot, but it can only be used safely on item barrels and slow moving enemies. Extra items released by these barrels consist of a yellow ribbon that presumably increases the power of the missiles, temporary invincibilty, carrots and money bags for extra points (item barrels are lost if you touch them). All carrots replenish the existing health bar for each life, so that means you can take a few hits before going down. On top of that, the carrot shower after every defeated boss is a guaranteed recovery aid before starting a new stage. During the first levels, this certainly gives the wrong idea that the game is easy, but soon enough the illusion gets vaporized when enemies start appearing with invincibility cloaks, firing deathly lasers and ramming into you in almost unavoidable kamikaze attacks. And the single extra life you get is only granted with 500.000 points.

Rabio Lepus has very short levels for a horizontal shooter, so all 12 stages can be completed in around 20 minutes. Game motifs are very consistent with the three main environments (spaceship, asteroid and planet), and enemy design isn't always as cute as it looks, with such things as floating heads, flaming dragons and flying mammoths to be fought along the way. I liked how colors are used here, because they sort of enhance the scrolling backgrounds and certainly help the feeling of depth you can amass from just a single parallax layer. The music doesn't have anything special but it's no disaster either, with robotic digitized voices being heard throughout the whole game.

There could've been a little more care in how the game was programmed, since some silly things sometimes contribute to stress the player unnecessarily. Take the hidden springs, for instance. In Rabio Lepus, the character can "walk" over surfaces after landing on them. If you touch one of these hidden springs you'll get tossed up very fast, which leaves you at the mercy of incoming enemies. It's also possible to activate this spring effect by pressing down while landed and suddenly going up, but the way this works is so flawed it's not even remotely reliable. Other tricky details are how money bags give totally random amounts of points and how enemy bullets shot towards the very right side of the screen will warp and magically appear on its left side. Yes, one can cope with all these minor setbacks, but they do get on my nerves when I score poorly or when I get hit due to a stray bullet or a hidden spring.

Upon starting a game it's possible to select an arrange version to play (lower option after you press start). It's got a different color palette, new and more enemies and plays a lot harder than the regular game. The Playstation 2 interface is the same as in other Oretachi titles I've seen so far, so R1+L1 will pause and grant access the main menu (all in Japanese) while SELECT will insert coins.

Besides all the manual/folder paperwork, the PS2 package also includes a music mini-CD (18 tracks with 23:47 of total time) and a mini-DVD with advertising for Rabio Lepus and Nekketsu Koukou Dodgeball Bu (!), some other weird Japanese ads, a gameplay sample of Rabio Lepus' six initial stages and a video for the remixed track included in the mini-CD.

My 1CC high score was achieved on the NORMAL difficulty, with the following humble outcome: 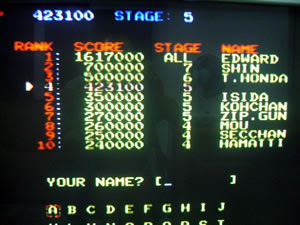